Anyone trying to destabilise India will face retaliation: Rajnath Singh 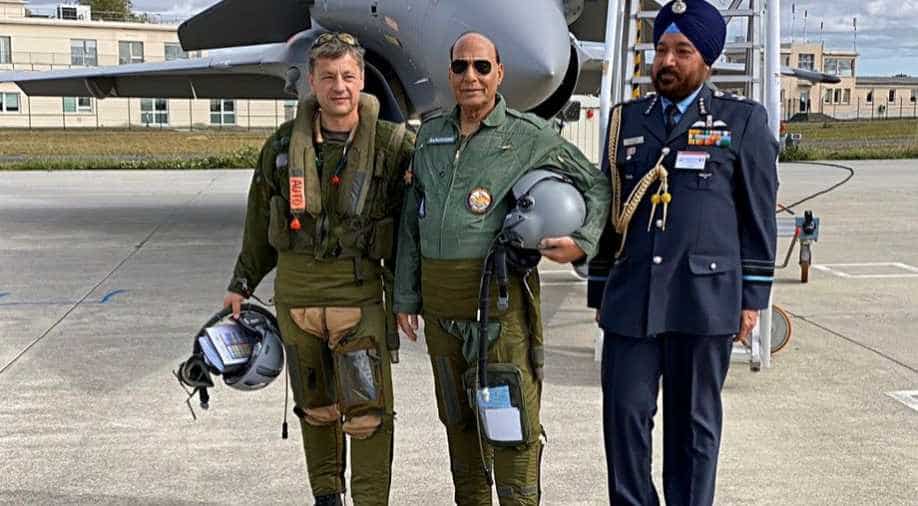 The Defence Minister called his tryst with Rafale as good, adding that Rafale's induction will enhance the strength of the Indian Air Force (IAF).

Defence Minister Rajnath Singh on Tuesday said that India will have to retaliate if someone tries to "destabilise" the country.

While talking about the induction of Rafale fighter jet and its significance, Singh told ANI, "I want to specify that we are doing it for Army, Navy and Air Force. The motive behind enhancing the capability is self-defence and not for attacking anyone. But if someone tries to destabilise India then we will have to retaliate."

The Defence Minister called his tryst with Rafale as good, adding that Rafale's induction will enhance the strength of the Indian Air Force (IAF).

"I had a good experience of flying Rafale aircraft as I flew at supersonic speed. I can say that with the induction of Rafale, our Air Force's strength will enhance as Rafale can cover air to air, air to surface," Singh added.

Earlier in the day, Rajnath held a meeting with French President Emmanuel Macron and termed it as 'fruitful.'

"Meeting with the French President was fruitful. Earlier Modiji also met Macron and he (President macron) was telling me about this. I also conveyed the regard to him from Modiji. President told me that strategic relation is old with India and will consistently get better," the defence minister said.

The first of the 36 French-built Rafale fighter jet bearing the tail number RB-001 was formally handed over to India on Tuesday.

Singh received the jet at the handing-over ceremony in Bordeaux, France in the presence of French Minister of Armed Forces Florence Parly.

The RB in the tail number denoted the initials of Air Chief Marshal Rakesh Bhadauria who played a key role in the signing of the biggest ever defence deal of India worth above Rs 60,000 crore for 36 fighter planes.

The ceremony coincided with the foundation ceremony of the IAF.

Rajnath performed Shastra Puja (worship of weapons) on the auspicious occasion of Vijayadashami after receiving the first of the 36 Rafale jets in the French port city of Bordeaux today.

The Inter-Governmental Agreement (IGA) for 36 Rafale aircraft procurement was signed between the Government of India and Government of France on September 23, 2016.