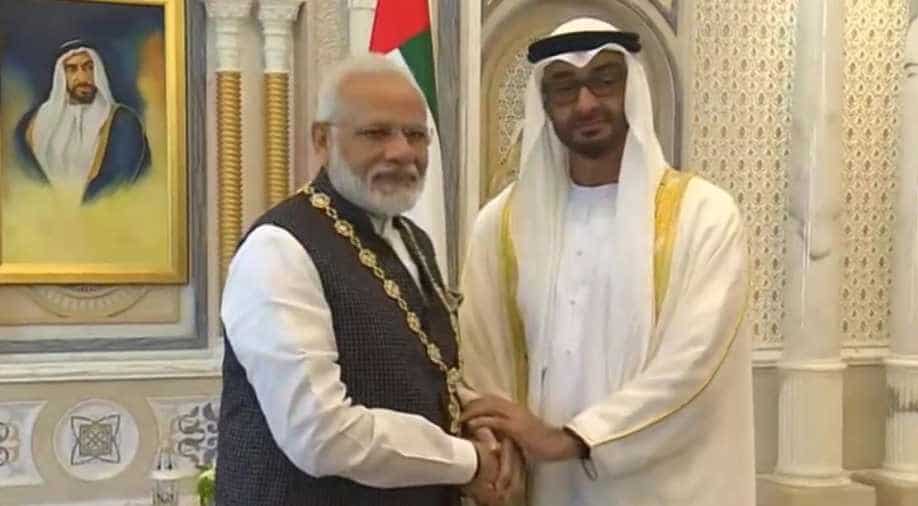 Earlier this year, the Maldives conferred ‘Rule of Nishan Izzuddeen’ to PM Modi in June 2019 which was the first foreign visit of PM Modi after taking charge in the second term.

While accepting Bahrain's award PM said, "I feel very honoured and fortunate to be awarded 'The King Hamad Order of the Renaissance'. I am equally honoured by your majesty's friendship for me and for my country. I humbly accept this prestigious honour on behalf of 1.3 billion Indians."

In all, six times countries from the Islamic world have had honoured PM Modi with their top honours.

The first Islamic country was Saudi Arabia in April 2016 which awarded 'King Abdulaziz Sash' award' to PM Modi. Afghanistan in June 2016 honoured PM Modi with 'Amir Amanullah Khan' award which was followed by Palestine, which conferred the 'Grand Collar of the State of Palestine' award in February 2018.

Earlier this year, the Maldives conferred ‘Rule of Nishan Izzuddeen’ to PM Modi in June 2019 which was the first foreign visit of PM Modi after taking charge in the second term.

Two-way investment between West Asia and India has been increasing. Earlier this month, Saudi Arabia backed Saudi Aramco - one of the world's largest company by revenue and announced that it will acquire 20 per cent stake in Reliance's oil, making it India's largest foreign direct investment.

PM Modi has also been honoured with UN's highest environmental honour, 'Champions of the Earth' award (2018), the '2018 Seoul Peace Prize' and Russia's highest civilian award the 'Order of St Andrew the Apostle'.

Meanwhile, there has been outrage in Pakistan over PM Modi being conferred the top civilian award of the UAE. Chairman Senate Sadiq Sanjrani, along with the parliamentary delegation, has cancelled his scheduled UAE visit in light of PM Modi visit to the UAE.

Pakistan's foreign minister Shah Mahmood Qureshi reacted to the cancellation of the visit and said, while "we should respect his decision, he became too sentimental".

He explained, "the UAE is our friend and they have supported us," adding, "just one year ago they bailed us out".