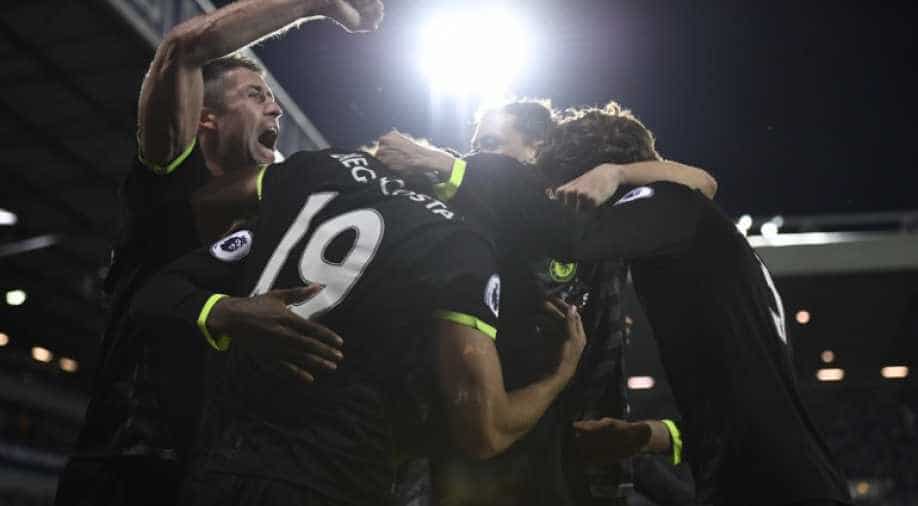 The west London club have won the English title six times with five of those triumphs coming in the past 13 seasons. Photograph:( Reuters )

Substitute Michy Batshuayi's late goal clinched the Premier League title for Chelsea as they beat West Bromwich Albion 1-0 on Friday but they were made to fight all the way for the victory they craved at The Hawthorns.

The victory, Chelsea's 28th of the season, put the long-time league leaders 10 points clear of second-placed Tottenham Hotspur, who have only three games left to play.

Italian Conte is only the fourth manager to win the Premier League title at the first attempt, emulating his Stamford Bridge predecessors Jose Mourinho and Carlo Ancelotti as well as Manuel Pellegrini who achieved the feat with Manchester City.

Conte, who won three consecutive titles as Juventus manager before taking over the Italian national team, danced for joy and was hoisted into the air by his players in front of Chelsea's ecstatic travelling fans who chanted "Antonio, Antonio".

Chelsea have now won five Premier League titles since Russian billionaire Roman Abramovich bought the club in 2003, but this one is arguably the most impressive considering they finished a woeful 10th last season.

"You have to cherish these moments, you work so hard all season to be where we are," said Chelsea defender and stand-in captain Gary Cahill.

"Consistently we have been the best team in the league. There is no better feeling in football. People have written us off as a team and individually and this has shut them up. We are champions. It's another one in the cabinet."

It was not vintage Chelsea on Friday but they got the job done on a tense night in the Midlands.

They dominated possession against eighth-placed West Brom, who had little to play for but pride, and rained in shots before halftime, Cesc Fabregas and Pedro going closest while Diego Costa sent another effort over the bar.

West Brom offered the odd counter-attack but the one-way traffic continued after the break as Victor Moses was denied by a splendid low save by Ben Foster.

Eden Hazard had another effort blocked on the line but as Chelsea strained for the winner they began to look a little vulnerable at the back as West Brom gained in confidence.

The visitors had a huge scare when Salomon Rondon burst clear past David Luiz on the halfway line but his effort was superbly blocked by Cahill.

In the end Chelsea owed it to misfit Batshuayi, a peripheral figure for most of the season, to win the match and the title with only his second league goal since joining the club.

Six minutes after replacing a tiring Pedro, the striker signed from Olympique de Marseille for 33 million pounds ($42.5 million), stuck out a leg to net Cesar Azpilicueta's cutback, despite a valiant attempt by Foster to keep it out.

The final minutes were interrupted by some scuffling in the stands but nothing could dampen Chelsea's joy.

"I am happy. Very happy. It is my first Premier League title," Chelsea defender Luiz, who has been a defensive rock since returning to the club this season after two years in Paris, said. "When I decided to come back here I dreamed to win the Premier League. I am very happy because my dream came true."

Chelsea will get to celebrate their title success in front of their own fans versus Watford on Monday before finishing the campaign at home to Sunderland. Then it is the small matter of trying to clinch the double in the FA Cup final against Arsenal.

If they achieve that feat it will be the club's first double since the 2009-10 season under Conte's compatriot Ancelotti.