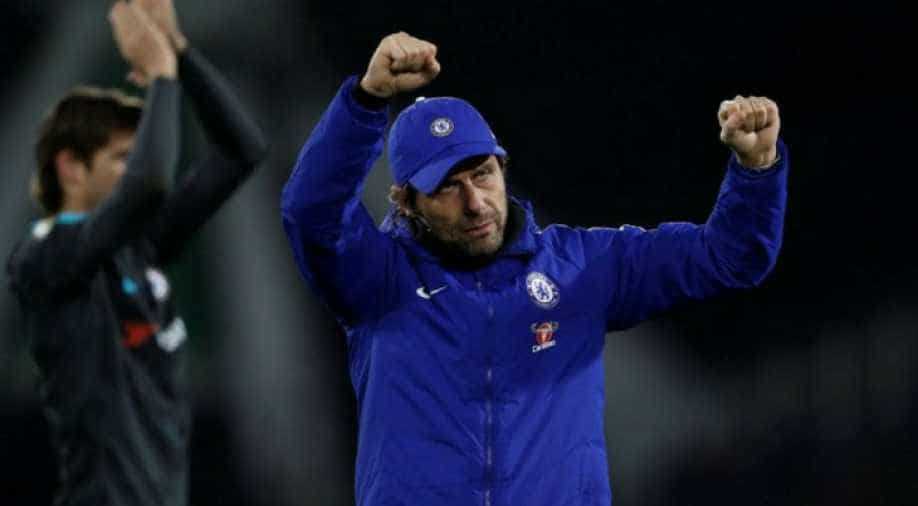 With City on a record-breaking run of victories, Blues boss Conte admits there appears to be little chance of closing the gap. Photograph:( Reuters )

Antonio Conte insists the battle for a top-four finish is providing Chelsea with all the motivation they need, even if Premier League leaders Manchester City out of reach.

Conte's side recovered from the disappointment of a pre-Christmas draw at Everton by beating Brighton 2-0 on Tuesday to move within a point of second-placed Manchester United.

With City on a record-breaking run of victories, Blues boss Conte admits there appears to be little chance of closing the gap.

But the Italian insisted last season's champions are still motivated.

"I think in this league there is a great motivation for all. To try, I repeat, to stay there and to fight until the end," he said.

"I don't know if it will win the title. It depends upon Manchester City. They are doing something extraordinary to win every game and draw only once up to now. That means you're having a fantastic run.

"Otherwise, Chelsea, United, Tottenham, Arsenal and Liverpool would be staying there to fight. We fight for a place in the Champions League next season.

"There are four places for six top teams. Last season, Manchester United and Arsenal finished fifth and sixth, no?. There is this great motivation for me, for the players, and we want to try and improve.

"Our start wasn't easy this season, for many reasons. But we want to work and improve. There are many competitions. It's important to face every competition and be very proud to play every game."

Alvaro Morata headed Chelsea ahead immediately after half-time and Marcos Alonso added the second on the hour at Stamford Bridge.

"Today it was positive to score for Alvaro," said Conte. "He's our No9. Against Everton, he didn't play. Also, Alonso, to score five goals up to now, for a wing-back, is a great achievement.

"But it's important to continue. Not to stop scoring. We need this alternative from our strikers."

Conte wants to strengthen his squad in January and expressed his admiration for Bayern Munich midfielder Arturo Vidal after being questioned about reports linking the Chile midfielder with a move to Chelsea.

"I must be honest, it's not right to talk about a player of another team,” he said.

"Especially if you try to link this player with us. Arturo is a fantastic player, I have a great respect for Arturo, and we spent many years in Juventus together. I'd always want him with me."

"I've heard reports. As manager of this football club, I'm quite sure I'd know. There's been no contact between the two clubs," he said.

Albion remains close to mid-table our a solid run following last season's promotion and Hughton added: "I want them to feel proud of where we are and what we've achieved so far, but frustrated because we could have done better.

"Would we have been happy at the start of the season to be in the position we are in now? The answer would be yes. But we could have done better.

"If anything, in the second half of the season, it won't get any easier. It will get harder, if anything."