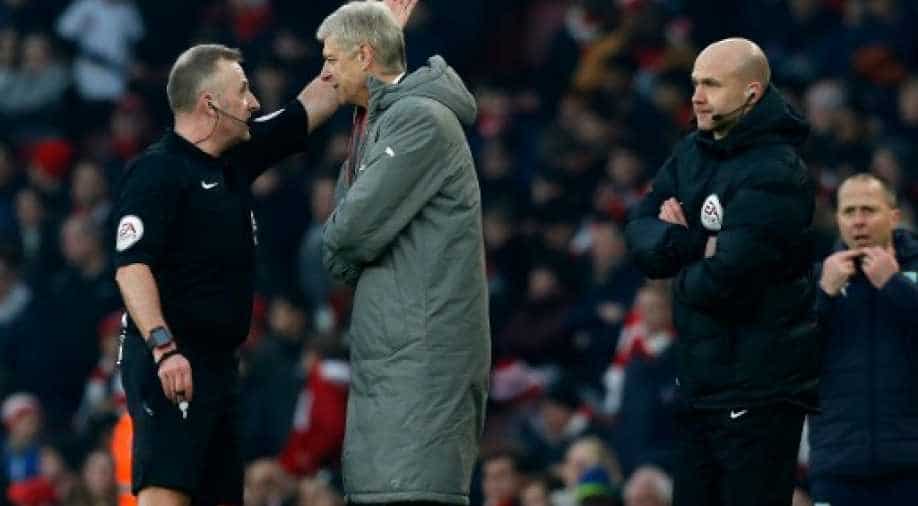 Arsene Wenger was given a four-game touchline ban with "immediate effect" by the Football Association on Friday after accepting a misconduct charge following an incident that saw the veteran Arsenal manager sent off in Sunday's dramatic win over Burnley.

Wenger will now be forced to sit in the stands for Arsenal's FA Cup trip to top-flight rivals Southampton on Saturday, as well as Premier League games against Watford, leaders Chelsea and Hull City.

Wenger was sent off by referee Jon Moss after allegedly using abusive or insulting language towards fourth official Anthony Taylor after Burnley were given a stoppage-time penalty at the Emirates Stadium.

The French coach, 67, tried to watch the final moments of the match from the entrance to the tunnel and was shown pushing Taylor when the official asked him to leave the area.

Arsenal went on to win the game 2-1 after being awarded a penalty of their own in the final minute, with victory taking them second in the Premier League table, eight points behind Chelsea.

The FA said Friday that it was alleged that Wenger, Arsenal's manager since 1996, had "in or around the 92nd minute, used abusive and/or insulting words towards the fourth official".

The FA statement added: "It was further alleged that following his dismissal from the technical area, his behaviour in remaining in the tunnel area and making physical contact with the fourth official amounted to improper conduct."

Wenger was also fined £25,000 ($31,000, 29,000 euros) after formally admitting the charge at a personal hearing before an independent regulatory commission.