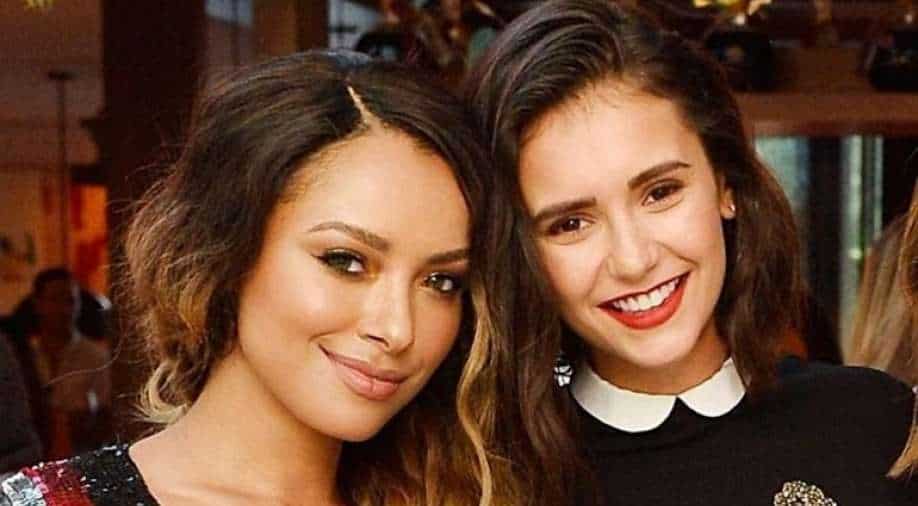 Elena Gilbert and Bonnie Bennett of 'Vampire Diaries' are back together!

It's the season of reunions and Elena Gilbert and Bonnie Bennett are back together!

The popular stars of `The Vampire Diaries' Nina Dobrev and Kat Graham reunited recently much to the delight of their fans. The two shared a glimpse of them spending time tohgether which left the internet in a tizzy.

Taking to Instagram Stories, Nina teased that she was in the mood to have a little fun. "Surprise Sunday Funday," the 32-year-old actor captioned her video.

Nina then began to explain her weekend plans, sharing in a short clip, "So I was sitting here on a Sunday, just chilling, and I thought to myself, `Can I break the internet?`""And then I thought, `Yes, I think I can break the internet,`" she continued, before revealing that Kat was sitting beside her the whole time. "Consider yourself broken, internet," Nina added in the video.

"I love you so much," Kat told Nina and sweetly kissed her on the forehead.

Nina was right as the video actually broke the internet. On her Instagram account, the actor posted a selfie with Kat and many of her followers gushed over their reunion in the comments section."YOU REALLY DID BREAK THE INTERNET NINA," one person wrote, with another replying, "THE BEST DUO IS BACK IM LIVING."

The two friends seem to have had a low-key hangout, and were seen dressed casually. Kat wore a blush-coloured shirt and denim jeans, while Nina donned a graphic tee and shorts.

Dobrev and Graham played high school (and then college) best friends, Elena and Bonnie, whose unbreakable bond helped them navigate everything from standard boy drama to the insane supernatural trauma that plagued their lives in Mystic Falls for six seasons on the CW drama.

Dobrev had left the show after season 6, but Graham stayed with the series through its eighth and final season, with Dobrev returning for the series finale episode.Fans of the fantasy drama series, which came to an end in 2017, might recall that Nina recently reunited with another `Vampire Diaries` co-star: Paul Wesley.

During Super Bowl weekend in February, the former cast members, along with their significant others, enjoyed a ski and snowboarding trip in Jackson Hole, Wyo, reported E! News.Nina hit the slopes with her Olympic gold medalist boyfriend, Shaun White. And Paul`s wife, Ines de Ramon, also joined in on the fun.

The double date proved to be unforgettable, as the 38-year-old actor shared footage of his snowboarding skills and selfies with the group. "My kind of superbowl Sunday," he wrote at the time. Nina added on her Instagram, "sometimes you gotta double up to double down."Although Paul previously admitted that he and Nina didn`t get along while filming the hit CW series, it`s clear they have since become good friends. "We totally clashed [the] first couple years in terms of just getting on each other`s nerves, and then developed this wonderful friendship," Paul revealed about their past rift. "So it`s like this nice, happy ending."

"I remember everyone would walk up to me after the show aired and they`d be like, `Are you and Paul dating in real life?`" Nina recalled. "Because everyone thought that we had such good chemistry... And we despised each other so much, that it read as love. We really just didn`t get along the first maybe five months of shooting."

Despite not liking each other at first, they have most certainly put the past behind them. As Nina described, she "never thought that he would be one of my best friends."

`The Vampire Diaries` cast also included Ian Somerhalder, Steven R McQueen, Sara Canning, Candice King, and many more. While there`s no news of a `Vampire Diaries` reboot, Nina will be seen next in upcoming movies like `Redeeming Love` and `Sick Girl`.