'Hunger Games' prequel novel gets title and cover, is a movie next? 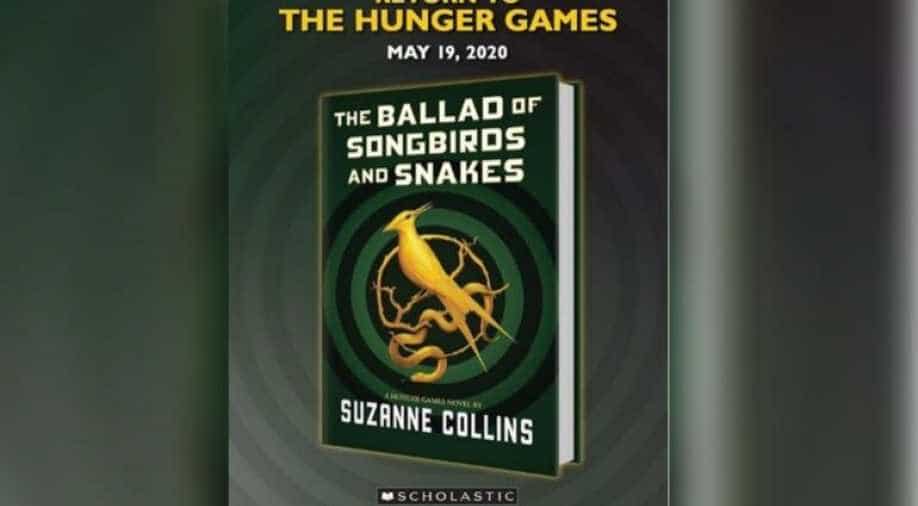 A prequel of the famous book series, set around 64 years before the beginning of the trilogy is releasing next year and it finally has an official title and a compelling cover.

Almost a decade after wrapping up 'The Hunger Games', American TV writer and author Suzanne Collins is bringing fans back to Panem.

A prequel of the famous book series, set around 64 years before the beginning of the trilogy is releasing next year and it finally has an official title and a compelling cover.

The Instagram account of The Hunger Games shared a picture of the book cover, writing, "RETURN TO THE HUNGER GAMES! The Ballad of Songbirds and Snakes from Suzanne Collins will be released on May 19, 2020.

RETURN TO THE HUNGER GAMES! The Ballad of Songbirds and Snakes from Suzanne Collins will be released on May 19, 2020. #SongbirdsandSnakes #HungerGames

"The cover features a golden Mockingjay perched on a branch over a slithering reptile. The prequel novel is set to release on May 19, next year.

As announced on Friday on 'Good Morning America', 'The Ballad of Songbirds and Snakes' will serve as a precursor to the dystopian YA series, which first took the fans on a journey set in the fictional world of Panem, across three 'Hunger Games' books between 2008 and 2010, reported People.

Set 64 years before the events of the first 'Hunger Games' novel, which set Katniss Everdeen on a mission to overthrow an oppressive regime that pitted children against each other in the titular traditional deathmatch, the prequel will detail the events surrounding the 10th Hunger Games

"With this book, I wanted to explore the state of nature, who we are, and what we perceive is required for our survival," Collins previously said of the novel.

l"The reconstruction period 10 years after the war, commonly referred to as the Dark Days, as the country of Panem struggles back to its feet -- provides fertile ground for characters to grapple with these questions and thereby define their views of humanity," Collins added.

Following the global success of Jennifer Lawrence's four Hunger Games films, which grossed nearly $3 billion at the worldwide box office, Lionsgate has hinted that the series could continue via big-screen prequels as well.

"As the proud home of the Hunger Games movies, we can hardly wait for Suzanne's next book to be published. We've been communicating with her during the writing process and we look forward to continuing to work closely with her on the movie," studio Chairman Joe Drake said.

The first three 'Hunger Games' books - 'The Hunger Games', 'Catching Fire' and 'Mockingjay' have sold more than 100 million copies and have been translated into more than 50 languages.