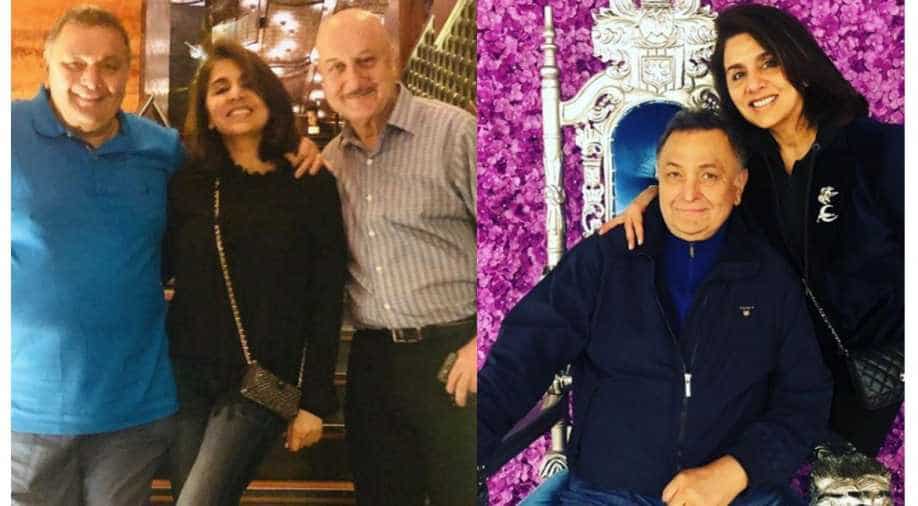 Anupam Kher who has been in New York for the shoot of a new TV series titled 'New Amsterdam' saw the Kapoors come over as he prepared lunch for them.

Kher who has been in New York for the shoot of a new TV series titled 'New Amsterdam' saw the Kapoors come over as he prepared lunch for them. Apparently, the Kapoors never thought they would meet Kher like this and Rishi went on to praise the "correct phulka" that he made for them.

Anupam shared a lovely picture of himself with the couple on his Instagram account. Dressed in a white top and ripped jeans Neetu was seen sitting on a chair as the men stood behind her giving a perfect pose to capture the moment.

Guess who came for lunch? I was delighted to have @neetu54 #RishiKapoor along with Santosh at my house for lunch. As Neetu ji rightfully commented that we never thought we will meet like this at my place in NY. But then don’t I always say #KuchBhiHoSaktaHai. Dattu was over the moon to specially cook for them. 🙏😍

A few days ago, Anupam went to meet Rishi and wished him a speedy recovery. Rishi has been in New York for quite some time now for the treatment of an unknown condition.

It was as always wonderful and inspirational to spend a beautiful evening with my friends @neetu54 and #RishiKapoor. Both of them are a great example of human endurance and triumph. Road to recovery, both, physical & mental is faster if there is love, care and determination. Well done. Jai Ho.🙏😍👍

An array of celebrities including Malaika Arora, Arjun Kapoor, Karan Johar, Deepika Padukone, Shah Rukh Khan, Aamir Khan, and Priyanka Chopra are among others who have visited the actor during his treatment in New York.

On the professional front, Anupam was recently seen in `One Day: Justice Delivered` that released on July 5. He also announced his autobiography `Lessons Life Taught Me, Unknowingly` that will be out in August.