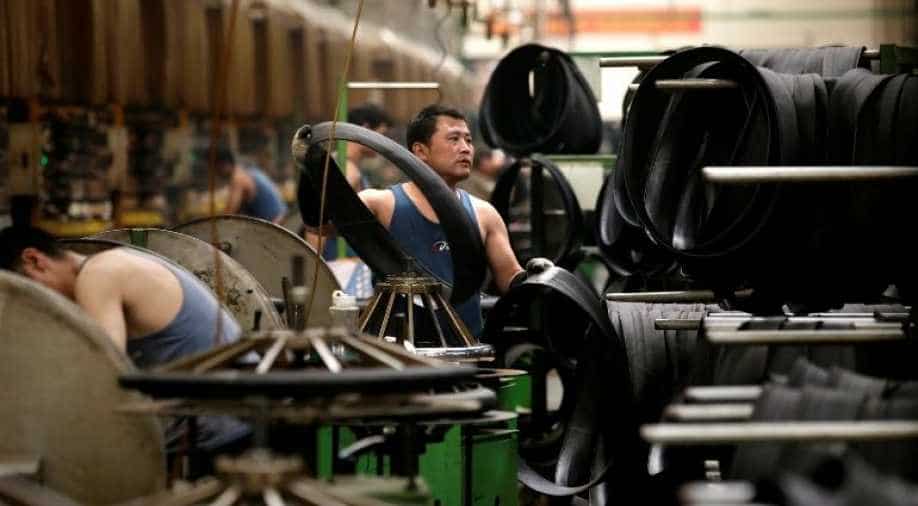 Export orders fell for the 15th straight month in August, although at a slower pace, with the sub-index picking up to 47.2 from July's 46.9.

Factory activity in China shrank in August for the fourth month in a row as the United States ramped up trade pressure and domestic demand remained sluggish, pointing to a further slowdown in the world's second-largest economy.

Persistent weakness in China's vast manufacturing sector could fuel expectations that Beijing needs to roll out stimulus more quickly, and more aggressively, to weather the biggest downturn in decades.

The Purchasing Managers' Index (PMI) fell to 49.5 in August, China's National Bureau of Statistics said on Saturday, versus 49.7 in July, below the 50-point mark that separates growth from contraction every month.

A poll showed analysts expected the August PMI to stay unchanged from the previous month.

Export orders fell for the 15th straight month in August, although at a slower pace, with the sub-index picking up to 47.2 from July's 46.9.

Total new orders from home and abroad also continued to fall, indicating domestic demand remains soft, despite a flurry of growth-boosting measures over the past year.

"Front-loading of exports to the US ahead of higher tariffs supported trade and overall activity growth, but this effect will likely fade in the next few months," said analysts at Goldman Sachs in a note.

Manufacturers in consumption-oriented industries such as the auto sector have been especially vulnerable. Carmakers such as Geely and Great Wall have slashed expectations for sales and profits.

The data showed activity at medium- and small-sized firms contracted, even as large manufacturers, many backed by the government, managed to expand in August.

Factories continued to shed jobs in August amid the uncertain business outlook. The employment sub-index dropped to 46.9, compared with 47.1 in July.

After Beijing hit back with retaliatory tariffs, Trump said existing levies would also be raised in the coming months. The combined moves now effectively cover all of China's exports to the United States.

Trump said late on Friday that trade teams from both sides continue to talk and will meet in September, but tariff increases on Chinese goods set to go into effect on Sunday will not be delayed.

The US president had said earlier in the week that China wants to reach a deal 'very badly', citing what he described as increasing economic pressure on Beijing and job losses.

But most analysts are highly doubtful of an end to the dispute any time soon, and some have recently cut growth forecasts for China in the coming quarters.

The sudden deterioration in trade ties has prompted speculation over whether China needs to roll out more forceful measures to keep growth from sliding below 6 per cent this year, the bottom end of its target range of around 6.0-6.5 per cent.

Analysts widely expect Beijing will cut some of its major lending rates in September for the first time in four years to help stabilise growth.

But sources had told Reuters before the latest trade escalations that big benchmark rate cuts were considered a last resort, as policymakers worry that could fuel a further build-up in debt and squeeze bank's profit margins, heightening financial sector risks.

So far, Beijing has relied on a combination of fiscal stimulus and monetary easing to deal with the economic slowdown, including hundreds of billions of dollars in infrastructure spending and tax cuts for companies.

But analysts note infrastructure investment growth has remained subdued despite the earlier pump-priming measures, underlining the need for additional support.

Growth in China's services sector activity picked up for the first time in five months in August, with the official numbers from a separate business survey rising to 53.8 from 53.7 in August.

Beijing has been relying on a strong service sector to cushion some of the economic impacts of trade uncertainties and sluggish manufacturing activities.

However, despite the higher overall figure, activity in the property industry contracted, the statistics bureau said in a statement.

The services sector has been propped up by Chinese consumers' rising wages and robust spending power in recent years.

However, the sector softened late last year amid a broader slowdown.