With few options, Iran, Europe try to save nuclear deal 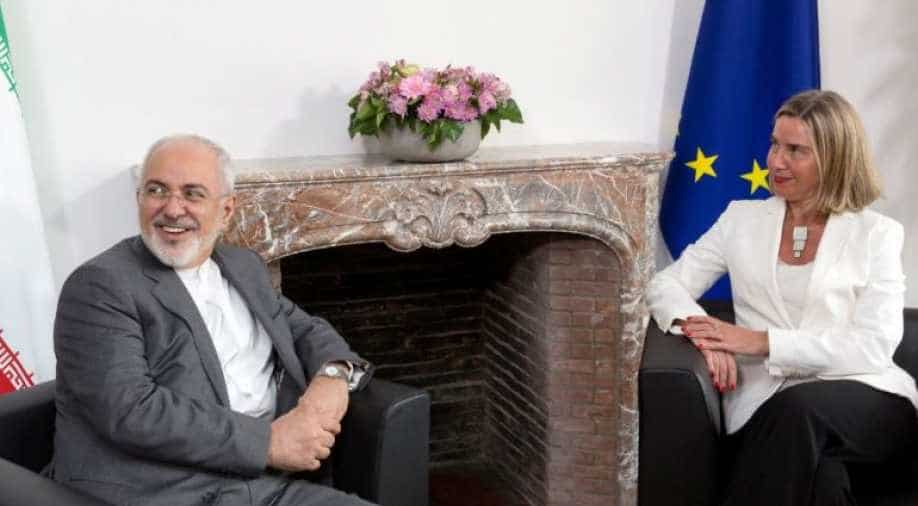 European diplomats acknowledged that the EU support, however sincere, risked looking hollow after Trump last week reimposed an array of wide sanctions on the Islamic Republic

Europe and Iran sought a united front on Tuesday to save the nuclear deal US&nbspPresident Donald Trump abandoned last week, with Britain warning against regime change and Tehran expressing hope it could keep the economic benefits of the accord.

"We are on the right path to move forward ... Whatever (is) decided should preserve and guarantee Iran's rights ... Our talks (with the E3) will continue in the next two weeks," he said, referring to Britain, France and Germany.

Many European diplomats doubt privately that the 2015 accord between Iran and six world powers can survive the reimposition of US&nbspsanctions ordered by Trump, but the European powers will say that they stick by the terms of the 2015 pact giving Iran sanctions relief in return for an end to its nuclear ambitions.

Iranian President Hassan Rouhani asked the European Union to stand against the United States' "illegal and illogical" actions, saying that Tehran could stay in the accord only if it fully benefits from it.

The accord lifted international sanctions on Iran in 2016 in return for Tehran shutting down its capacity, under strict surveillance by the UN&nbspnuclear watchdog, to stockpile enriched uranium for a possible atomic bomb.

Trump denounced the accord, completed under his predecessor Barack Obama, as a "horrible, one-sided deal that should have never, ever been made" as it did not cover Iran's ballistic missile programme or its role in Middle East conflicts.

The deal's proponents say it is crucial to forestalling a nuclear Iran and preventing wider war in the Middle East.

Mogherini, who as the EU's top diplomat chaired the final stretch of 12 years of negotiations to clinch the Iran accord in July 2015 in Vienna, said: "We will all save it together."

Zarif said talks would go on for the next two weeks and EU diplomats said they needed some time to understand the US&nbspposition.

"One of the questions that we need to ask the Americans is whether their final objective is to make the Iranians yield on its nuclear programme or to get rid of the regime," said a senior French official, acknowledging that Paris was concerned by the ideological shift in Washington since John Bolton was appointed US&nbspNational Security Advisor.

Those comments were echoed by Foreign Secretary Boris Johnson who told parliament that regime change in Iran was not a policy Britain should pursue.

French diplomats said they also wanted to assess Iran's intentions in sticking to the deal, but also to see how open it was to serious talks on other Western concerns.

French President Emmanuel Macron has said he wants to secure a wider deal after the US&nbspwithdrawal with four pillars: limiting Iran's nuclear program in the short and the long term, restraining its ballistic missile program and curbing what the West views as its destabilising behaviour in Syria, Yemen, Iraq and Lebanon.

European diplomats acknowledged that the EU support, however sincere, risked looking hollow after Trump last week reimposed an array of wide sanctions on the Islamic Republic that will hit European companies investing in Iran.

The EU, which with Germany, France, Britain, Russia, China and the United States, signed the nuclear accord with Iran, does have some steps it can take to shield European business in Iran.

They include retaliatory sanctions, allowing the European Investment Bank to invest directly in Iran and coordinating euro-denominated credit lines from European governments. In the past, the European Union has also lodged complaints at the World Trade Organisation.

But the reach of the US&nbspfinancial system, the dominance of the US&nbspdollar, Trump's efforts to weaken the WTO and the presence of European companies' operations in the United States all weaken any potential EU measures.

"It is going to be very difficult for us to preserve the economic benefits of the Iran deal," one senior European diplomat said. "We will try to uphold our side of the bargain."

Following Tuesday's evening talks in Brussels, all 28 EU leaders are expected to discuss their next steps at a summit in Sofia on Wednesday, but no decisions are expected.

They could consider retaliatory sanctions using the EU's so-called blocking statute that bans any EU company from complying with US&nbspsanctions and does not recognise any court rulings that enforce American penalties.

But the measures have never been used and may be difficult to enforce, while EU companies could still face asset seizures, fines and possibly criminal charges in the United States.

"Let's not fool ourselves that there are dozens of things we can do," said a second senior European diplomat. "We don't have much to threaten the Americans. Optimism doesn't abound."

Exclusive: Russia aiming to fly solo without Airbus and Boeing