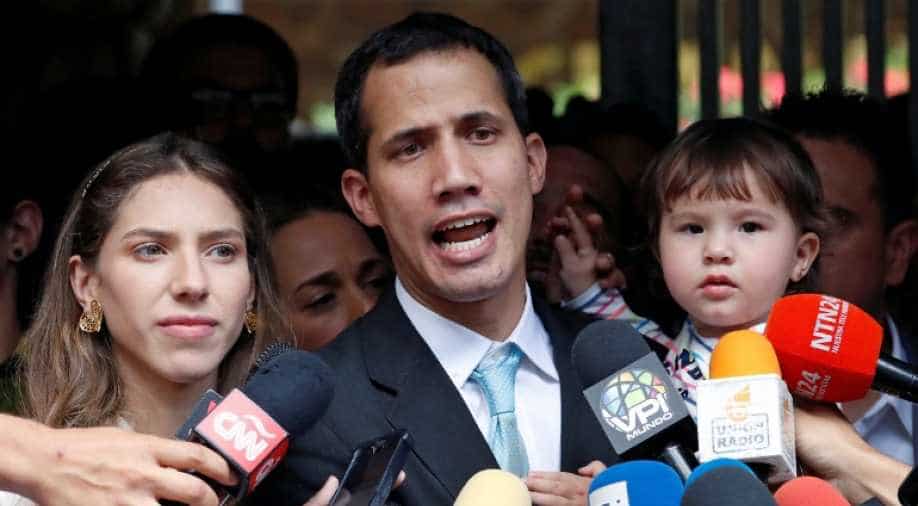 The move heightened fears for the security of the 35-year-old National Assembly leader, who declared himself acting president last week in a direct challenge to Maduro's authority.

Venezuela's opposition leader Juan Guaido said Thursday elite security forces had entered his home to threaten his family, blaming the government of Nicolas Maduro as international support grew for his bid to oust the embattled president.

The move heightened fears for the security of the 35-year-old National Assembly leader, who declared himself acting president last week in a direct challenge to Maduro's authority.

The police's special action force, FAES, had visited his home to interview his wife Fabiana Rosales, Guaido told his audience during a speech at Caracas university.

"The FAES is at my house, asking for Fabiana. At this moment the dictatorship believes that it will intimidate us," a confident Guaido said, his wife at his side.

Several opposition leaders have been jailed in recent years as Maduro cracked down on growing dissent in the Latin American country.

Earlier, European lawmakers recognized Guaido as the acting head of state -- another step forward in his bid to force out the socialist leader who has presided over the oil-rich country's economic collapse.

While marshaling international support, Guaido is seeking to maintain street pressure against Maduro at home, where he has called more mass protests for Saturday -- keeping him firmly in the government's crosshairs.

Venezuela's Supreme Court -- dominated by regime loyalists -- have frozen his assets and ordered him not to leave the country.

On Thursday, lawmakers at the Brussels-based European Parliament voted to accept Guaido as "legitimate interim president of the country" -- and urged the European Union to follow suit.

Four major European powers -- Britain, France, Germany and Spain -- have said they would do so if Maduro fails to call fresh presidential elections by the weekend. The US on Thursday urged all European countries to recognize Guaido.

"If imperialists want new elections, let them wait until 2025," a defiant Maduro said in an interview with Russia's RIA Novosti agency on Wednesday.

Guaido was at the main Caracas university to present his "rescue plan" for a country mired in economic meltdown, with basic goods and services scarce.

"We are going to address the humanitarian emergency, stop inflation in its tracks, reactivate the oil industry and move towards the restoration of access to public goods and services," he said to cheers from the audience.

Part of the plan unveiled by the opposition leader and his economic advisor Jose Guerra is to end exchange controls in force since 2003 and renegotiate Venezuela's estimated $150 billion debt.

With his wife at his side on the podium, Guaido said he had a 20-month old daughter at home and would be holding FAES accountable for "whatever they do to my baby."

"The objective is obvious... I tell these officials, do not cross the red line," he said.

The United States, which immediately recognized Guaido along with a dozen Latin American countries, has warned Maduro of "serious consequences" if he targets opponents.

The university speech came one day after thousands of people led by Guaido took to the streets in Caracas and various other cities, banging pots, blowing whistles and horns, and carrying banners that read: "Armed forces, regain your dignity" and "Maduro usurper."

The two-hour strike was called to press demands "that the armed forces side with the people" -- which Guaido himself said is "crucial to enabling a change in government."

Maduro supporters have matched the protests with counter-demonstrations.

Guaido wrote in a New York Times op-ed published on Wednesday that "clandestine meetings" had been held with members of the armed forces and security forces.

"The majority of those in service agree that the country's recent travails are untenable," he wrote.

But his moves to court the military are fraught with risk, after bloody clashes following protests last week left more than 40 people dead and 850 incarcerated.

And so far, the military high command has remained loyal to Maduro.

"Do you want a puppet of the gringos to govern Venezuela?" Maduro asked soldiers at a rally on Wednesday, referring to Guaido.

The last 10 days of political upheaval have exacerbated the general disarray in Venezuela, which has the world's largest proven oil reserves but has suffered an economic meltdown marked by hyperinflation and shortages of basic necessities.

Millions have been left in poverty, while 2.3 million more have fled the country, unleashing a migration crisis in South America.

"The conditions favor Guaido, with decisive international support headed by the United States, while the aggravated economic crisis plays into that as well," analyst Carlos Romero told AFP.

Maduro's government has meanwhile cracked down on the foreign media working in Venezuela, arresting several journalists over the last few days for working without a specialist visa.