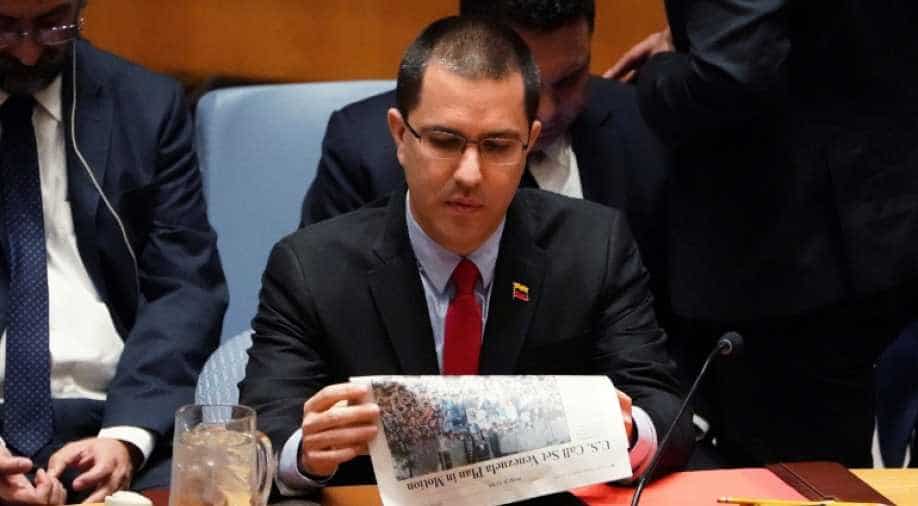 File photo of Venezuela's Foreign Minister Jorge Arreaza is pictured at the United Nations during a Security Council meeting about the situation in Venezuela in the Manhattan borough of New York City. Photograph:( Reuters )

Most Latin American countries, Canada and European nations have recognised Guaido or are on the verge of doing so. But these rapid endorsements have triggered angry responses from Russia, China and a few left-leaning Latin American states, and wariness from some African and Caribbean nations.

But Venezuela's seat at the 193-member world body is held by President Nicolas Maduro's government and Guterres is unable to ramp up a humanitarian response in Venezuela without Maduro's approval or UN Security Council authorization.

"The United Nations are ready to increase their activities in Venezuela in the areas of humanitarian assistance and development," Guterres told Guaido in a letter dated January 29 and seen by Reuters on Wednesday. "For that, the United Nations need, however, the consent and cooperation of the Government."

The exchange illustrates how a US-led campaign for international recognition of Guaido over Maduro has left the UN and other international organizations caught in the middle of global division over the issue.

Most Latin American countries, Canada and European nations have recognised Guaido or are on the verge of doing so. But these rapid endorsements have triggered angry responses from Russia, China and a few left-leaning Latin American states, and wariness from some African and Caribbean nations.

Guterres noted that in his relations with UN member states he respects "the decisions of the intergovernmental bodies, particularly the General Assembly and the Security Council."

The General Assembly allows each UN nation one vote, while the five permanent members of the Security Council, charged with maintaining international peace, include Russia and China.

The international split is also hampering swift decisions at other multilateral groups like the Washington-headquartered International Monetary Fund and the World Bank, whose recognition of the Guaido government could eventually help get sorely-needed loans to Venezuela.

Maduro's government has denied that there is a humanitarian crisis in the country, blaming economic problems on sanctions. Venezuela is struggling with hunger, preventable diseases and hyperinflation forecast at 10 million per cent in 2019.

The quickest way for a country or countries to try and deprive Maduro's government of Venezuela's UN seat would be to present a draft resolution to the General Assembly for a vote. However, diplomats said that such a move could not currently garner the majority support needed to be successful.

"We do think there will be appropriate resolutions when the time is right and we'll certainly support those. They won't come just from us, they'll come from other nations who care deeply about the Venezuelan people as well," US Secretary of State Mike Pompeo told reporters at the UN on Saturday.

Maduro was sworn in on January 10 for a second term in office after elections last year that was widely dubbed illegitimate, while Guaido took the helm of the elected National Assembly earlier this month and on January 23 proclaimed himself the country's rightful leader.

A heated Security Council meeting on Saturday revealed the bitter divide over the crisis.

When asked about the possibility of a showdown over Venezuela's UN seat, Russian UN Ambassador Vassily Nebenzia said Maduro's government was legitimate and there was no need to challenge its credentials.

The UN has previously had to address competing claims for representation at the world body.

In September 2011, the General Assembly approved a Libyan request to accredit envoys of the country's interim government as Tripoli's sole representatives at the world body, effectively recognising the National Transitional Council. The move came after the United States, Russia, China and European nations had all recognised that council.

So far, Guaido has named envoys to Washington and the Organization of the American States regional bloc. If he decided to name a UN envoy, such a request would traditionally be sent to Guterres and then considered by a nine-member credentials committee, which includes the United States, Russia and China.

The IMF and World Bank could eventually test support for Guaido through a straw poll of member countries that make up their respective executive boards, according to several bank and fund officials. The United States is the largest and most influential member country in both organizations.

Latin America's largest lender, the Inter-American Development Bank (IADB), could be the first financial institution to put the issue before its board - even as soon as next week, according to some officials. Several board officials, however, cautioned that the membership was divided and there was no consensus on how to proceed.

Still, recognition by global lenders of Guaido will not automatically unlock multilateral funding any time soon, officials said. Venezuela is $212 million in arrears to the IADB and was censured by the IMF last year for failing to provide economic data to the fund.

"It is not obvious what the UN is going to do, much less what the IMF would do," said James Boughton, the IMF's former historian, now at the Center for International Governance Innovation.

"It would be up to a member country to request the acknowledgement of a new government, in this case, it would come from the US," said Boughton.

When that happens, "then it is just a question of a simple majority decision by the executive board," citing IMF rules.