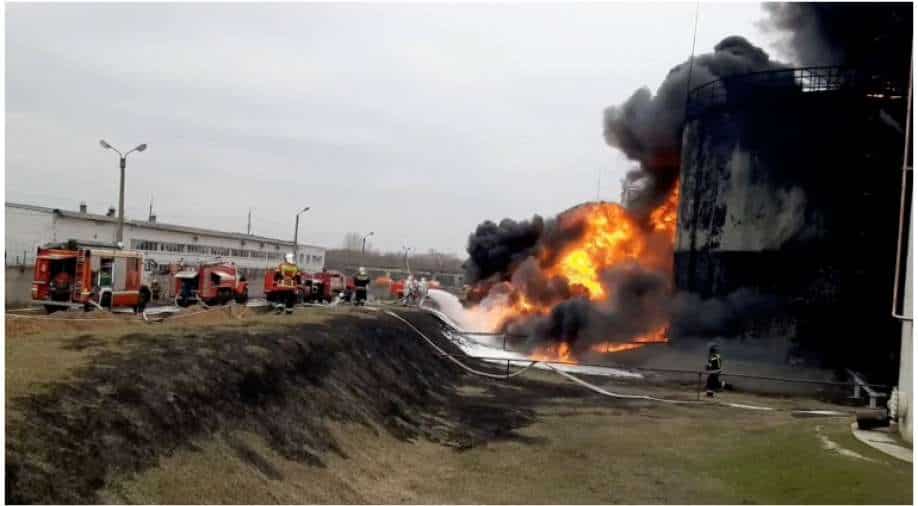 A still image taken from video footage shows members of the Russian Emergencies Ministry extinguishing a fire at a fuel depot in the city of Belgorod, Russia April 1, 2022. Photograph:( Reuters )

Russia's defence ministry said that two Ukrainian helicopters struck the facility in Belgorod, some 35 km (22 miles) from the border with Ukraine, after entering Russia at extremely low altitude at around 5 a.m. Moscow time (0200 GMT).

Russia accused Ukraine of carrying out an air strike against a fuel depot in the Russian city of Belgorod on Friday, an incident the Kremlin said could affect peace talks, but a top Kyiv security official denied responsibility.

Russia's defence ministry said that two Ukrainian helicopters struck the facility in Belgorod, some 35 km (22 miles) from the border with Ukraine, after entering Russia at extremely low altitude at around 5 a.m. Moscow time (0200 GMT).

Ukraine's top security official rebuffed the Russian accusation - the first by Moscow of an air strike on Russian soil since Moscow launched its invasion on Feb. 24. Belgorod is one of Russia's main logistics hubs for the war.

"For some reason they say that we did it, but according to our information this does not correspond to reality," Security Council Secretary Oleksiy Danilov said on Ukrainian national television.

"Ukraine is currently conducting a defensive operation against Russian aggression on the territory of Ukraine, and this does not mean that Ukraine is responsible for every catastrophe on Russia's territory," he said.

"Of course this cannot be perceived as creating comfortable conditions for continuing the talks," Peskov said, adding that everything was being done to prevent disruptions in fuel supplies in the city.

Ukraine's Danilov retorted: "He says it doesn't help talks, but does it help talks when they kill our children, our women - these outrages they commit on our land? These people are kind of sick."

Security camera footage of the depot, from a location verified by Reuters, showed a flash of light from what appeared to be a missile fired from low altitude in the sky, followed by an explosion on the ground.

Regional governor Vyacheslav Gladkov said the resulting blaze injured two workers and forced the evacuation of some local residents. The fire was later contained, he said.

In a post on messaging app Telegram, Gladkov said a second blast later on Friday morning damaged a power line near the village of Nikolskoye but that no one was hurt in an explosion. Pictures he posted showed a crater in a field.

Russian oil firm Rosneft, which owns the fuel depot, said in a separate statement that no one was hurt in the fire. Russia's defence ministry said the facility was exclusively for civilian use.

An ammunition depot near Belgorod caught fire on Wednesday, causing a series of blasts. At the time, Gladkov said authorities were waiting for the Russian defence ministry to establish its cause.

Moscow calls its intervention in Ukraine a "special military operation."