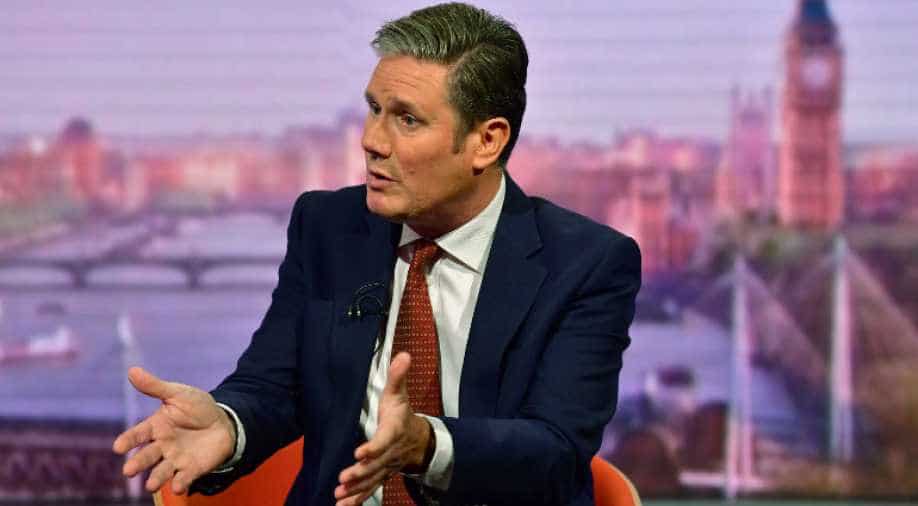 British lawmakers opposed to a no-deal Brexit will attempt to pass a law this week to stop Prime Minister Boris Johnson from letting Britain crash out of the European Union on October 31, the opposition Labour Party's Brexit spokesman said.

Senior minister Michael Gove refused, however, to guarantee the government would abide by any such legislation.

Johnson has pledged to deliver Brexit with or without a deal, but opposition lawmakers - and several from his own Conservatives - want to push through legislation to rule out no-deal before parliament is suspended in just over a week's time.

Labour Brexit spokesman Keir Starmer said the plan, which will be published on Tuesday, had one "very simple" aim - to stop Johnson taking Britain out of the EU without a deal.

"Obviously, if we are at the 31st of October, that will require an extension," Starmer told the BBC's Andrew Marr on Sunday.

"But I think this should be a very short, simple exercise designed to ensure we don't crash out without a deal."

Gove, one of Johnson's key ministers who is coordinating no-deal contingency plans, said he believed a majority of lawmakers would back the prime minister and defeat the attempt.

"We know the prime minister is making progress with our European friends and allies in attempting to secure a deal, and I don't believe that people will want to erect a roadblock in his way," he said.

Asked whether the government would abide by any legislation passed to prevent a no-deal Brexit on October 31, Gove said: "Let's see what the legislation is that (Starmer) puts forward."

Starmer said later it was "breathtaking" for ministers not to confirm the government would comply with legislation passed lawfully. "No government is above the law," he said on Twitter.

David Gauke, a former British justice secretary and a Johnson critic, said he would meet the prime minister on Monday to hear his plan to deliver a Brexit deal he could support.

But Gauke said he was prepared to disobey Conservative discipline and be expelled by the party if he was not persuaded.

Sky News reported later on Sunday, however, that Johnson cancelled the meeting with Gauke because of a 'diary clash".

Johnson told the Sunday Times that those backing the opposition to no-deal risked there being no Brexit at all.

"Are you going to side with those who want to scrub the democratic verdict of the people — and plunge this country into chaos?" he said.

"Or are you going to side with those of us who want to get on, deliver on the mandate of the people and focus with absolute, laser-like precision on the domestic agenda? That's the choice."

Johnson has demanded the withdrawal agreement negotiated with the EU be changed to remove the Irish "backstop" - an insurance policy designed to maintain an open border between EU member Ireland and the UK's Northern Ireland.

Gove said German Chancellor Angela Merkel and French President Emmanuel Macron had indicated after talks with Johnson that the agreement - "which they had said was a block of marble that could not be altered" - was now capable of being changed.

But the EU's chief negotiator, Michel Barnier, said the backstop had to stay to protect the integrity of the EU single market.

"The backstop is the maximum amount of flexibility that the EU can offer to a non-member state," he wrote in the Sunday Telegraph.

Gove said preparations for no-deal were progressing and that there would be no shortages of fresh food, although there could be price rises. "Some prices (of food) may go up, other prices will come down," he said.

"The availability of fresh foods will be impacted as a result of checks and delays at the border," the BRC said.