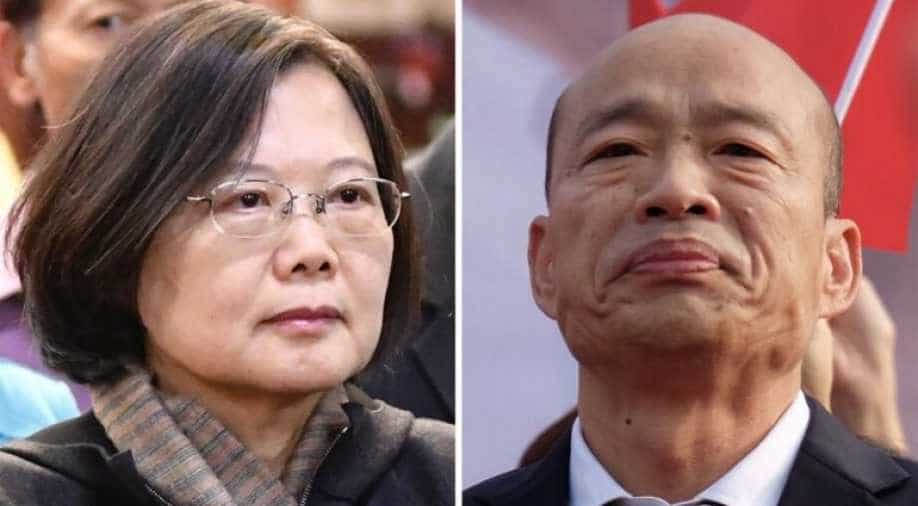 Watch: Who will win Taiwan's Election?

Tsai hails from the independence-leaning Democratic Progressive Party (DPP) and has been campaigning on a platform of defending Taiwan's sovereignty against threats from Beijing.

Han is from the mainland-friendly Kuomintang party (KMT) and is pushing for warmer relations with Taiwan's giant authoritarian neighbour.

Here are profiles of the candidates: 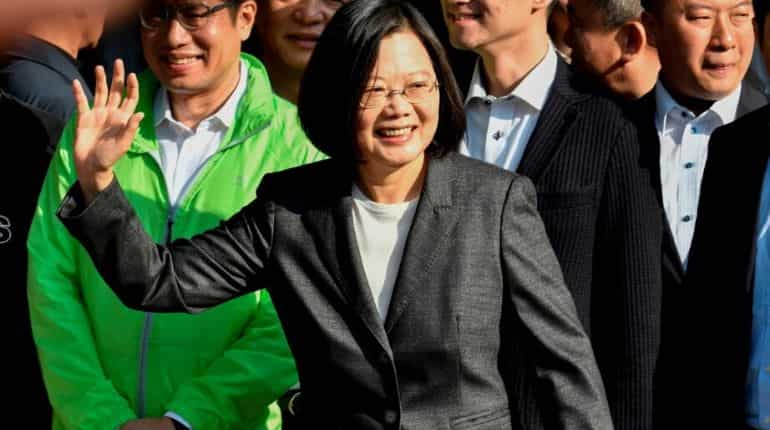 Tsai made history in 2016 when she became Taiwan's first female leader in a landslide election victory, as the public grew wary of the KMT's perceived cosiness with Beijing over the previous eight years.

But it has been far from smooth sailing since the 63-year-old took the helm.

Beijing rebuffed her calls for talks and instead set about isolating Taiwan because Tsai refuses to acknowledge the idea that the island is part of a "one China".

It cut off official communication, ramped up military and economic pressure, froze Taiwan out of major international bodies and poached seven of the island's dwindling diplomatic allies.

On the domestic front, her government's push for a controversial reform agenda, most notably pension cuts and legalising gay marriage, saw her approval ratings dive.

But in the past year, her fortunes have rebounded, going from below 20 points behind at her nadir to significantly ahead of Han. 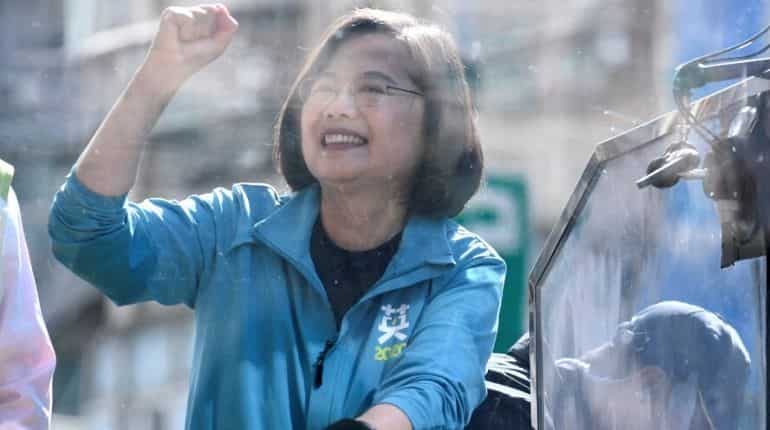 [ Taiwan's President Tsai Ing-wen from the ruling Democratic Progressive Party (DPP) gestures to supporters as she campaigns in the Banqiao (Courtesy: AFP) ]

Analysts say bellicose threats from Beijing and ongoing massive protests in Hong Kong have helped fuel her resurgence as voters fret about the shadow cast by communist China, which views Taiwan as its own territory and has vowed to seize it one day.

Her push to legalise gay marriage, while divisive, also reinvigorated her youth base.

Born into a wealthy family, Tsai was an academic and a trade negotiator before she entered politics.

Soft-spoken and mild-mannered, she has frequently had to battle misogynistic insults in a political culture where male veterans have historically dominated.

She lost her first presidential bid in 2012, but stayed the course and won increased support from within her own party and the public ahead of her 2016 victory.

Her 2020 campaign has remained largely gaffe-free as she pushes the idea that the DPP will stand up to China and maintain Taiwan's position as one of Asia's most progressive democracies.

While the economy has fared well during her tenure even in the midst of the global trade war, it is the main attack point for her opponents who accuse the DPP of needlessly antagonising China and leaving Taiwan struggling as a result. 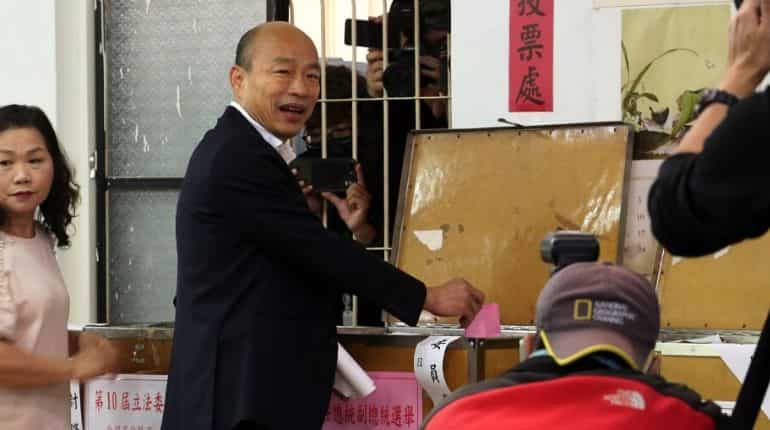 [ Han Kuo-Yu, presidential candidate for Taiwan, casts his ballot as he votes at Linyuan District in Kaohsiung (Courtesy: AFP) ]

Han Kuo-yu fits the current zeitgeist for populist outsiders who shake up the old political establishment.

In the past two years, the 62-year-old has journeyed from relative obscurity to KMT presidential candidate, backed by a fervent base of supporters that local media have dubbed the "Han tide".

But he has struggled to maintain his stellar rise since winning his party's primary.

Written off by many KMT bigwigs, Han shot to political stardom in 2018 when he swept the mayoralty of Kaohsiung, a city in the south of Taiwan that had long been a DPP heartland.

He then saw off challenges by billionaire Foxconn founder Terry Gou and other veteran politicians to seize the primary.

Han has projected a plain-talking "everyman" image, using his modest upbringing and experience of unemployment to appeal to grassroots voters.

He has shown a knack for using the criticism to his advantage. When a spokesman for Tsai dismissed Han as something of a country bumpkin by calling him an "earthen steamed bun", he responded by presiding over a steamed bun cooking competition. 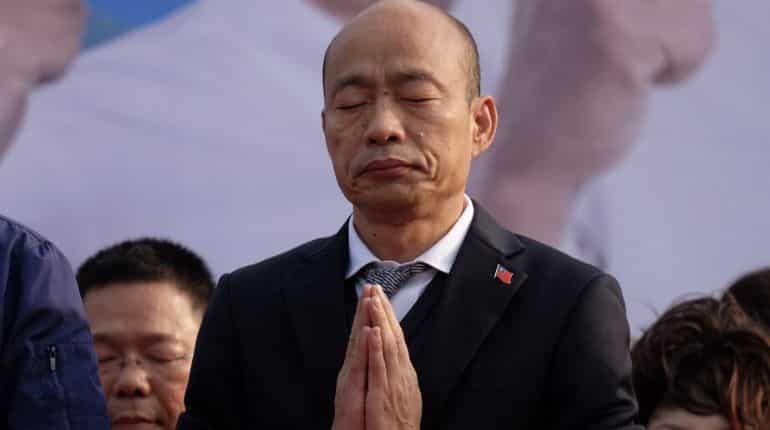 [ Han Kuo-Yu, Taiwan’s presidential candidate prays for the victims killed during a helicopter crash during a campaign rally in Tainan (Courtesy: AFP) ]

Han has described January's vote as a choice between "peace or crisis" with China, campaigning on the slogan "Taiwan safe, people rich" with promises to restore warmer ties with Beijing and boost the economy.

That message appeals to many, especially those whose businesses rely on the much larger mainland economy.

But it has left Han vulnerable to criticism that he is too friendly towards Beijing, especially after he met senior Chinese officials during a trip to the mainland last year.

Han's plain-talking has also resulted in gaffes on the campaign trail as well as accusations that he is a "runaway mayor" who promised to bring jobs and investment to Kaohsiung only to run for president instead.

He remains significantly behind in most polls.

But Han has often been written off in the past, only to prove his detractors wrong once the votes are cast.