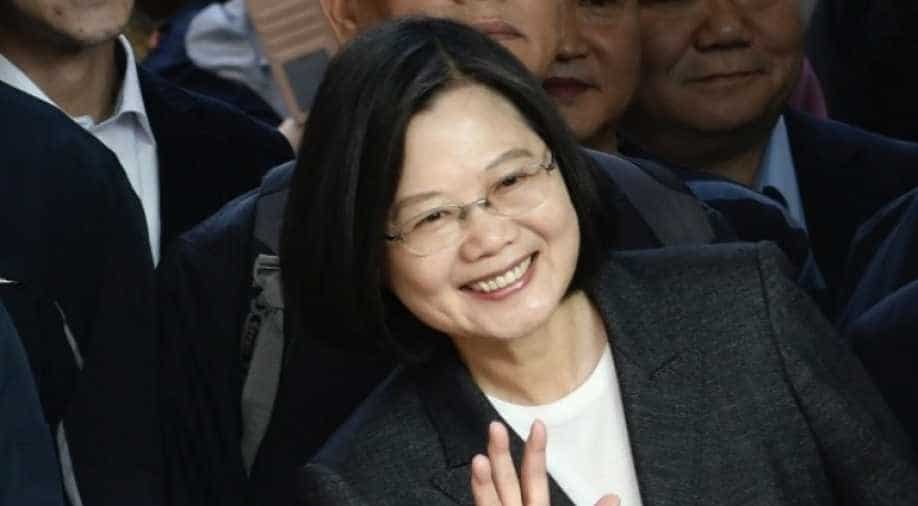 Taiwan President Tsai Ing-wen (C) waves as she waits in line with other voters at a polling station in Chunghe district in Taiwan Photograph:( AFP )

After the polls opened at 8 am (0000 GMT), long queues were seen outside the election stations

Voting began on Saturday in Taiwan for the presidential and parliamentary election, which was focussed around the island's fraught relationship with China.

After the polls opened at 8 am (0000 GMT), long queues were seen outside the election stations. The initial results are likely to come out late in the evening.

President Tsai Ing-wen also voted in Taipei and told reporters after casting her vote that she hoped that everyone exercise their right to vote.

This year's election is crucial for the island as the president and his main opponent have contrasting views on the relations with China.

Beijing considers Taiwan as part of its territory which can be taken by force if necessary.

Tsai is seeking another term and portrayed herself as a defender of Taiwan's liberal values against the increasingly authoritarian regime in China under President Xi Jinping.

Tsai's main opponent is Han Kuo-yo is in favour of close proximity with China and accuses the present government of unnecessarily antagonising Beijing.

Han represents Kuomintang (KMT) and his campaign struggled to gain momentum as he is seen someone very close to China and lacks experience.

However, Han said that he will also defend democracy in Taiwan, but favours warmer ties with Beijing to boost the island's economy.

After Tsai won big in the last elections, China increased military and economic pressure on Taiwan and even poached some of its diplomatic allies.

However, polling pundits predict a parliamentary victory for Tsai's DPP.

Taiwanese were infuriated by Beijing's response to pro-democracy protests in Hong Kong and the situation of Uighurs in China.

People in Taiwan were also angry after Xi said last year in a blunt speech that the island's absorption into the mainland is "inevitable".