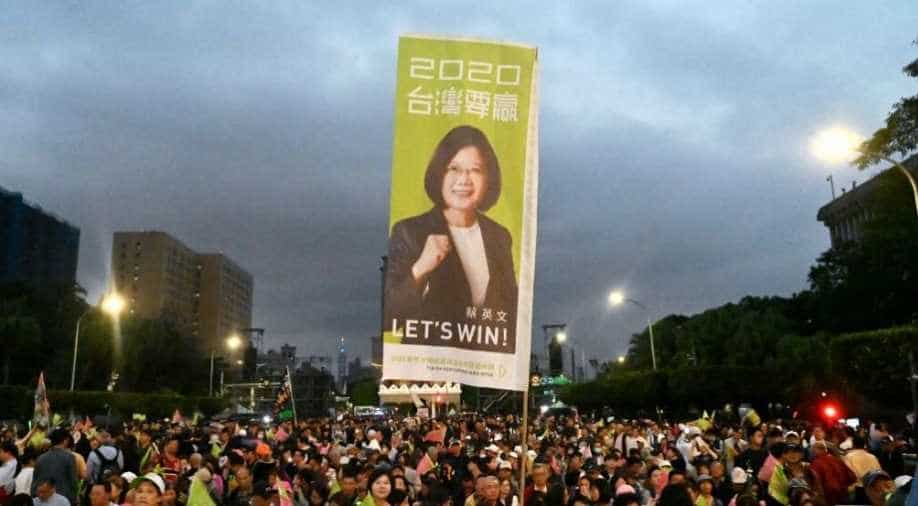 Some 19 million people are eligible to vote on Saturday to choose between two leaders with very different visions for Taiwan's future -- in particular how close the self-ruled island should tack to its giant neighbour.

Taiwan's presidential rivals held massive rallies Friday night in a final push to convince voters on the eve of a closely watched election that looks set to infuriate China and send ripples far beyond its borders.

Some 19 million people are eligible to vote on Saturday to choose between two leaders with very different visions for Taiwan's future -- in particular how close the self-ruled island should tack to its giant neighbour.

Beijing views Taiwan as part of its territory and has vowed to one day retake the island, by force if necessary.

But China is also Taiwan's largest trade partner, leaving it in a precariously dependent relationship.

President Tsai Ing-wen, who is seeking a second term and is the frontrunner, has pitched herself as a defender of Taiwan's liberal values against the increasingly authoritarian shadow cast by Beijing under President Xi Jinping.

Her main competitor Han Kuo-yu, 62, favours much warmer ties with China -- saying it would boost the island's fortunes -- and accuses the current administration of needlessly antagonising Beijing.

Huge crowds hundreds of thousands strong and a dazzling sea of flags -- green for Tsai, red and blue for Han -- greeted both candidates during their raucous last rallies.

"This election will determine if Taiwanese people can bravely choose democracy and freedom despite pressure from China," Tsai told supporters.

But Han told his crowd it was time to mend ties with Beijing.

"Interactions between the two sides of the Taiwan Strait have become frosty and are at their lowest ebb," he said.

Taiwan bans publishing polls within 10 days of elections but Tsai has led comfortably throughout the campaign. Her party currently has a parliamentary majority, which analysts expect it to retain.

Beijing has made no secret of its desire to see Tsai ousted.

Her Democratic Progressive Party leans towards independence, and Tsai rejects Beijing's view that Taiwan is part of "one China".

In the four years since Tsai won a landslide victory, Beijing has tightened the screw, severing official communications with her administration while ramping up economic and military pressure.

It also poached seven of Taiwan's few remaining diplomatic allies, hopeful that a stick approach would convince voters to punish Tsai at the ballot box.

But the campaign appears to have backfired, especially in the last year after Xi gave a particularly bellicose speech stating Taiwan's absorption into the mainland was "inevitable".

Taiwanese voters were increasingly rattled by China's hardline response to pro-democracy protests in neighbouring Hong Kong and the mass internment of Uighur Muslims in Xinjiang.

Arthur Bai, a 29-year-old theatre technician, was draped in a rainbow flag and among the huge crowd in Taipei where Tsai held her final rally.

"She has been very elegant in dealing with China, she stands up to them," he told AFP.

Tsai's party, which is popular with younger voters, legalised gay marriage last year -- a first for Asia -- and Bai said he feared that landmark could be at risk if Han won power.

"We have to choose a progressive government, not go backwards," he added.

Han, who is more popular with older, socially conservative Taiwanese, held his final rally in the southern city of Kaohsiung where he is mayor.

"I want Taiwan and China to be one family, we need to coexist peacefully with China," local resident Chu Ming-hui, 63, told AFP at Han's rally.

Han has struggled on the campaign trial.

A plain-speaking populist, he stormed onto the political scene from relative obscurity in 2018 when he won Kaohsiung, a DPP stronghold, and then beat prominent competitors to win his party's primary.

But his political momentum slowed once he became a presidential candidate as he fought to shake off accusations he lacked experience, was too cosy with Beijing and had limited concrete policy proposals.

Tsai has seen the opposite trajectory.

A year ago she looked a lame-duck president, languishing in the polls after the DPP received a thumping at local mid-term elections.

But analysts say Tsai's ability to seize on the protests in Hong Kong, as well as Taiwan's successful economic navigation of the US-China trade war, have boosted her fortunes.

The results of Saturday's vote will also be closely watched by regional powers and in Washington, especially given the parlous state of US-China relations.

Taiwan has long been a potential flashpoint between Beijing and Washington, which remains the island's main military ally.