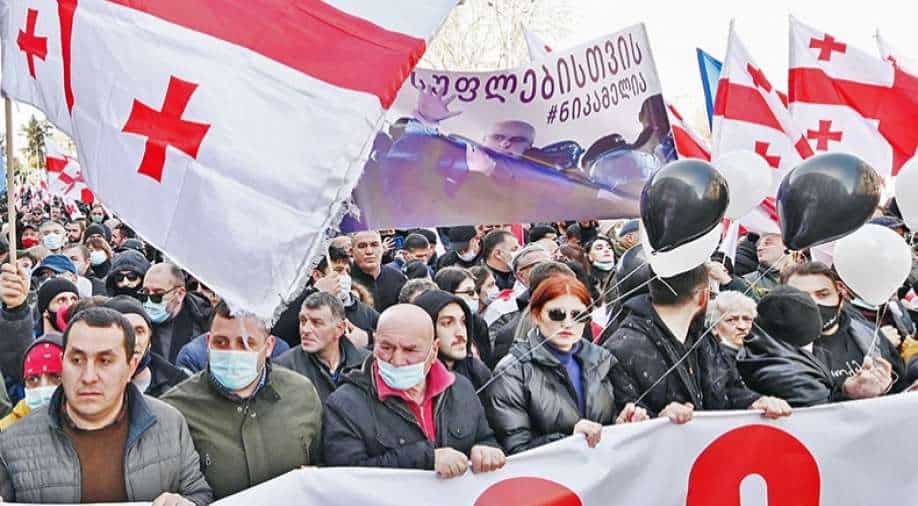 Protesters marched through the city's main street, led by the leaders of all of Georgia's opposition parties waving Georgian, EU, and US flags, before staging a rally outside parliament.

Thousands of anti-government protesters rallied in the Georgian capital Friday to demand early elections after the arrest of a top opposition leader.

Protesters marched through the city's main street, led by the leaders of all of Georgia's opposition parties waving Georgian, EU, and US flags, before staging a rally outside parliament.

Georgia plunged deeper into political crisis following this week's arrest of Nika Melia -- the leader of the country's main opposition force, the United National Movement (UNM), and a violent police raid on the party headquarters.

"I am in prison, but I am free," Melia wrote in an address to demonstrators read out at the rally.

"We are fighting for freedom and we will prevail in this struggle."

Supporters said they were energised by Melia's resolve.

"We will not stop until he is set free, until Georgia is free from Georgian Dream's authoritarianism," he said referring to the ruling party.

Ex-Soviet Georgia has faced political turmoil since parliamentary elections in October that the opposition said was rigged to give the ruling party a narrow victory.

Opposition members have refused to enter the new parliament in a boycott that weighs heavily on the ruling party's legitimacy.

Melia, a 41-year-old who has united Georgia's traditionally divided opposition forces, has denounced his prosecution on charges of "organising mass violence" during anti-government protests in 2019 as politically motivated.

A court in Tbilisi last week ordered Melia to be placed in pre-trial detention after he refused to pay an increased bail fee in the case.

Prime Minister Giorgi Gakharia resigned over plans to arrest Melia, warning it would escalate tensions, but police moved in anyway and detained him on Tuesday.

Friday's rally was the latest in a series of mass protests the opposition has staged since October, to denounce what it says is political repression and to demand fresh polls.

More protests have been announced for the coming weeks.

"The protest movement will continue until the ruling party liberates all political prisoners and calls snap elections," a leader of the opposition Lelo party, Badri Japaridze, told reporters on Friday.

The United States led a chorus of international condemnation against Melia's arrest, saying the move was a setback for pro-Western Georgia "on its path toward becoming a stronger democracy in the Euro-Atlantic family of nations".