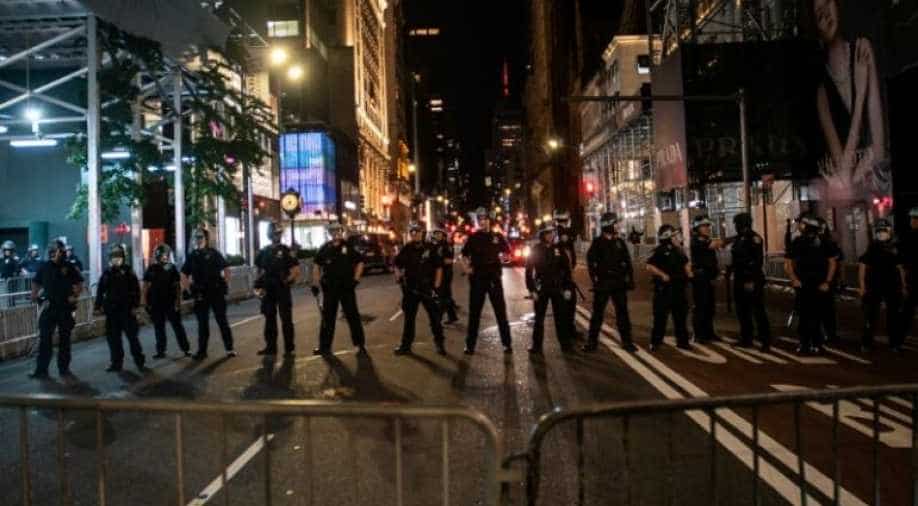 Residents and business owners in cities across the United States swept up broken glass, took stock of looted goods and surveyed the damage on Monday after a sixth straight night of violent protests over racial inequities and excessive police force.

Police and fire departments fought into the night to quell the chaos as fires burned near the White House and shops were looted in New York City and Southern California. The National Guard said it had deployed in 23 states and Washington, D.C.

One person was killed in Louisville, Kentucky, overnight where police and National Guard troops returned fire while trying to disperse a crowd.

"It’s devastating and heartbreaking," Alex Flowers, 30, said as she swept broken glass from the sidewalk outside Wasteland, a used-clothing store in Santa Monica, California, early on Monday. "I came to help clean up the city that has been destroyed and help the business owners and employees."

The unrest, which erupted as the country was reopening after lengthy lockdowns to stop the spread of the novel coronavirus, began with peaceful protests over the death of a black man, George Floyd, in police custody in Minneapolis last Monday.

Video footage showed a white police officer kneeling on the neck of Floyd, 46, for nearly nine minutes before he died. Derek Chauvin, the since-fired 44-year-old police officer involved in the incident, has been charged with third-degree murder and second-degree manslaughter. He was released on $500,000 bail and is due to appear in court on June 8, according to jail records.

Dozens of cities across the United States remain under curfews at a level not seen since riots following the 1968 assassination of civil rights activist Martin Luther King Jr.

There was "significant ongoing" civil unrest in 36 U.S. cities, including smaller ones like Fargo, North Dakota, and Roanoke, Virginia, the Federal Emergency Management Agency said on Monday. In the U.S. capital, St. John's Episcopal Church, an historic place near the White House where many U.S. presidents have gone to worship, suffered minor damage while the nearby headquarters of the AFL-CIO labor group was vandalized.

"The looting and destruction of property was expansive," Washington, D.C., Police Chief Peter Newsham told reporters, noting that looting had occurred in the Northeast and Northwest quadrants of the district, as well as upscale Georgetown area.

The city's mayor, Muriel Bowser, announced on Monday a curfew would be in place for two days starting at 7 p.m. and lasting until the morning hours.

White House spokeswoman Kayleigh McEnany told Fox News that Antifa, an anti-fascist group, was "certainly behind" the violence that had erupted in U.S. cities in recent days and that the country needed "law and order."

U.S. President Donald Trump, who on Sunday branded the group a terrorist organization, was due on Monday to meet his top law enforcement officer behind closed doors and then hold a call with governors, law enforcement and national security officials.

Trump has condemned the killing of Floyd and promised justice but has made no major public statement to address the crisis. He has issued a flurry of tweets, describing protesters as "thugs" and urging mayors and governors to "get tough" and threatened to use the U.S. military.

Critics accuse the Republican president, who is seeking re-election in a Nov. 3 election, of further stoking conflict and racial tension rather than seeking to bring the country together and address the underlying issues.

"He's not helping ... He is not leading, he is causing further disruption," Atlanta Mayor Keisha Lance Bottoms told CNN on Monday. Atlanta, Georgia's capital, was among a string of cities where protests turned violent in recent days.

Tensions in Georgia had been rising over the Feb. 23 death of Ahmaud Arbery, a 25-year-old black man who was shot while jogging. The white father-and-son suspects were not arrested until 74 days later.

The deaths of Arbery and Floyd were the latest in a string of similar incidents involving unarmed black men in recent years that has raised an outcry over racism in law enforcement, and reignited outrage across a politically and racially divided country that has been hit hard by the coronavirus pandemic.

Many cities affected by the unrest are just restarting some normal economic activity after more than two months of stay-at-home orders aimed at stemming the outbreak, which has killed more than 104,000 people and plunged more than 40 million people into joblessness.

Black people account for 6.8% of the population in Minnesota but 29% of coronavirus cases, according to state and federal data.