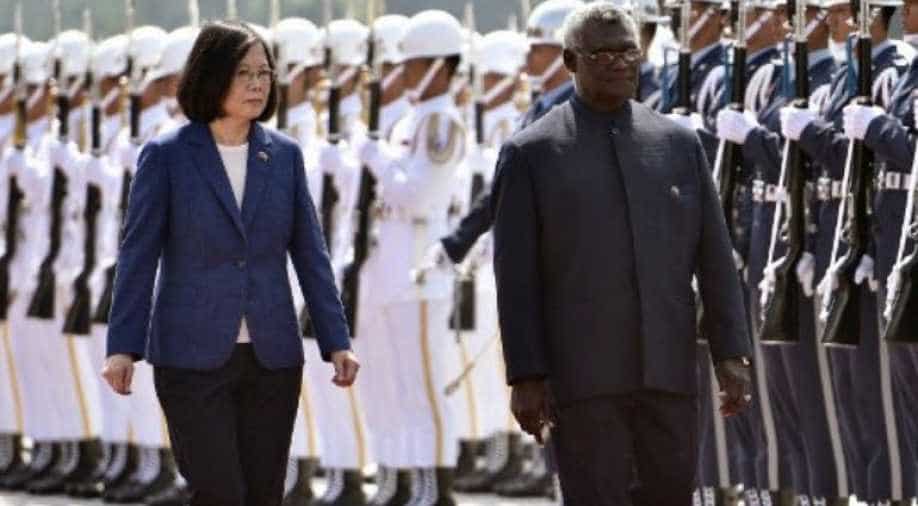 The Solomons are among only 17 countries that maintain official ties with Taiwan, but Prime Minister Manasseh Sogavare has vowed to review the relationship.

Taiwan's president on Monday urged the Solomon Islands not to switch diplomatic allegiance to China, as the Pacific nation deliberates whether to recognize the far more economically powerful Beijing instead.

The Solomons are among only 17 countries that maintain official ties with Taiwan, but Prime Minister Manasseh Sogavare has vowed to review the relationship.

Beijing has poached five diplomatic allies from Taipei since the 2016 election of Taiwanese President Tsai Ing-wen part of a wider campaign to isolate the island because her party refuses to accept that Taiwan is part of "one China".

Taiwan is desperate to stave off losing another diplomatically.

Last week the government warned that Chinese financial incentives had rendered other Pacific nations "in debt traps" with "flashy and false promises" of building infrastructure.

On Monday Tsai told the visiting Solomons Foreign Minister Jeremiah Manele that Taiwan is a responsible partner in the international community.

She called for the Solomons' "continuous support" and said Taiwan would work with the country to "further enhance bilateral relations".

Less than half the Solomon Islands' population has access to electricity and it is heavily reliant on foreign aid.

The debate offers a chance to weigh up promises of aid from Taipei and Beijing, as lawmakers and others in the Solomons push for a switch to China, the world's second-biggest economy.

Taiwan has been run as a de facto independent nation for the last seven decades but Beijing sees as part of its territory awaiting reunification, by force if necessary.

The Solomons' parliamentary foreign relations committee is accepting submissions on the Taiwan-China issue until the end of this month and has an October 31 deadline to report to the legislature.

Nations such as Australia and the United States fear Beijing's interest is fuelled by a long-term goal to establish a military base in the islands, offering control of vast swathes of ocean.