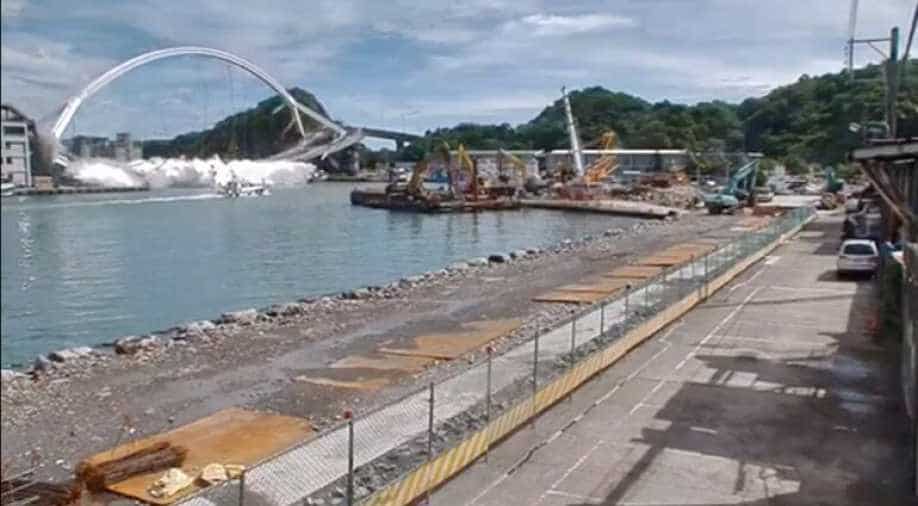 Rescuers in Taiwan searched on Wednesday for the last fisherman believed to have been crushed in his boat when a bridge collapsed into a harbour, killing at least five people, as questions were raised about construction standards.

Divers joined hundreds of rescuers in the search effort, using cranes and excavators to raise the wreckage of two fishing boats after Tuesday's accident injured ten people, most of them fishermen from Indonesia and the Philippines.

Dramatic video images released by Taiwan's Coast Patrol Corps showed the arched bridge in the northeastern town of Suao collapsing just as an oil tanker was crossing. Plumes of black smoke went up when the cargo of fuel burst into flames.

It was not immediately known what caused the collapse, which crushed three boats and set the tanker ablaze.

The bridge, dubbed the "lovers' bridge", was built in 1998 and was a tourist attraction.

The incident shocked many in Taiwan, which is regularly hit by earthquakes and typhoons and has high building standards, prompting authorities to launch a review of bridges.

The government has set up a task force to investigate, with President Tsai Ing-wen vowing not to "evade responsibilities".

Suao's mayor, Lee Ming-Che, told Reuters residents had raised a concern about the bridge's load limit, saying trucks carrying blocks of concrete for a construction project near the harbour had caused "shakings" when crossing the bridge.

Taiwan International Ports Corporation (TIPC), which managed the bridge's maintenance and oversees nearby the project, said it had completed a safety review before allowing the trucks to use the bridge.

"The project was evaluated and proven to be fine," said Wang Chin-Jung, associate general manager of TIPC, referring to the bridge's load limit.

"We will check if there's any problem with the bridge's design, construction and maintenance... We will not evade responsibilities if we have any," Wang said.

TIPC said the bridge was regularly checked and maintained, and that the company had observed safety regulations.

The bridge was last reinforced in 2018 and another security check was due next year, the company said. Problems such as rusty steel and cracks in concrete had been fixed during a check last October, it said.