Hundreds arrested in Indonesia after fresh protests over legal-reforms 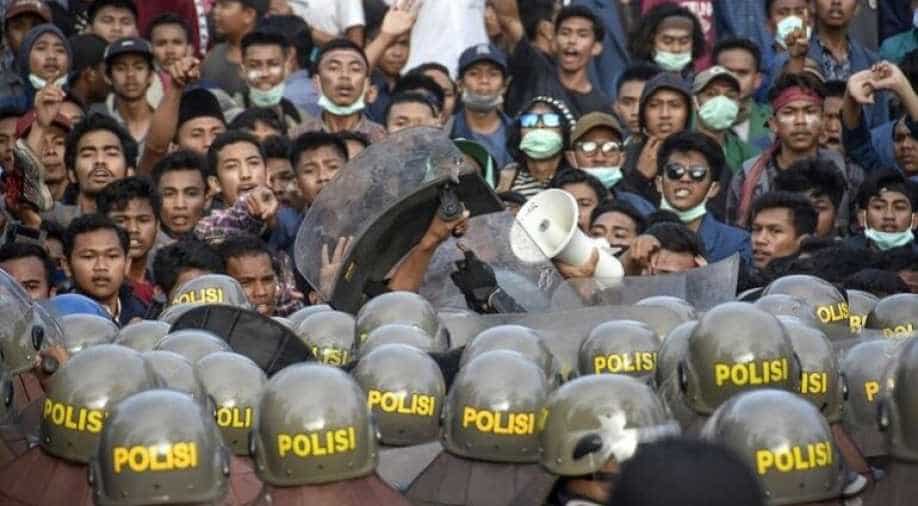 The arrests came after a night of pitched street battles between riot police and stone-throwing protesters many high school and university students, in Jakarta's sprawling downtown core.

More than 500 people were arrested after clashes in Indonesia's capital amid nationwide protests against a raft of divisive reforms, including banning pre-marital sex and weakening the anti-graft agency, authorities said Tuesday.

The arrests came after a night of pitched street battles between riot police and stone-throwing protesters many high school and university students, in Jakarta's sprawling downtown core.

Security forces geared up for more unrest Tuesday as some 575 lawmakers were sworn in at the country's heavily barricaded parliament building.

Since last week, at least two students have died and hundreds more have been injured as a wave of unrest swept across the Southeast Asian archipelago, just weeks before President Joko Widodo kicks off another term as head of the world's third-biggest democracy.

The protests are among the biggest student rallies since mass street demonstrations in 1998 toppled the Suharto dictatorship.

"We're questioning them to determine whether or not they are students," he added.

The government has sought to portray the protests as being hijacked by agitators aiming to disrupt the government and suggested they were similar to deadly post-election riots that paralysed Jakarta in May.

National police spokesman Dedi Prasetyo was quoted by local media as saying that police had detained 649 demonstrators from Monday's protests.

Several dozen protesters were injured Monday at rallies in other parts of the country, authorities said.

The demonstrations have been fuelled by a proposed bill that includes dozens of legal changes from criminalising pre-marital sex and restricting contraceptive sales, to making it illegal to insult the president and toughening the Muslim-majority country's blasphemy law.

Passage of the reforms has now been delayed, and Widodo has said he would also consider revising a separate bill that critics fear would dilute the powers of Indonesia's corruption-fighting agency.

Some 13 police officers have been questioned and detained over the deaths of two students in riots on Sulawesi island last week.

Students have issued a wide-ranging list of demands including scrapping some criminal-code changes, withdrawing troops from Indonesia's restive Papua region, and halting forest fires in Sumatra and Borneo that unleashed toxic haze across Southeast Asia.

Updating Indonesia's criminal code, which dates back to the Dutch colonial era has been debated for decades, but there was a renewed push this year backed by conservative Islamic groups.

The controversial changes could affect millions of Indonesians, including gay and heterosexual couples who might face jail for having sex outside wedlock or having an affair.