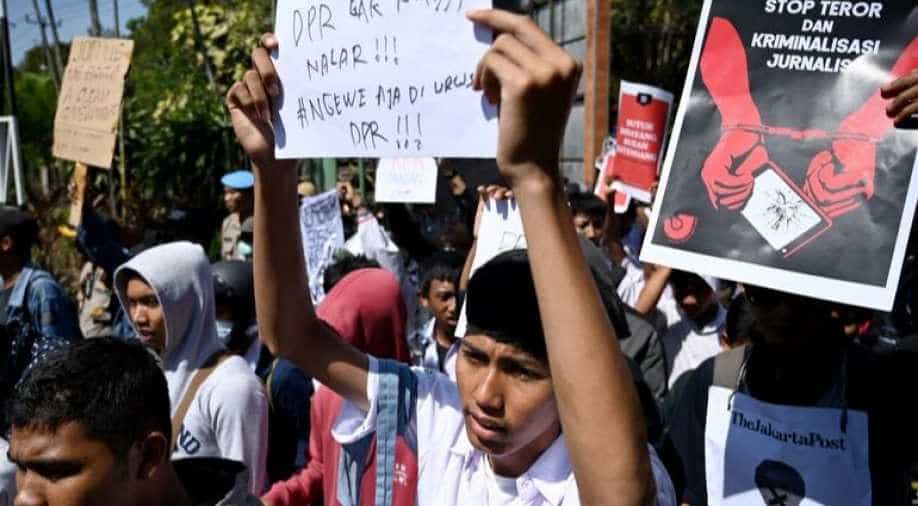 Protesters attend a rally against divisive legal reforms, including banning pre-marital sex and weakening the anti-graft agency, in Denpasar on Indonesia's resort island of Bali on September 30, 2019. Photograph:( Reuters )

In the capital Jakarta, some 26,000 police and soldiers were deployed while large crowds -- including placard-carrying students and factory workers -- chanted for change near parliament, which was barricaded with barbed wire

Thousands rallied across Indonesia Monday in fresh demonstrations sparked by a raft of divisive legal reforms, including banning pre-marital sex and weakening the anti-graft agency.

At least two students have died and hundreds more were injured as unrest swept across the Southeast Asian archipelago, just weeks before President Joko Widodo kicks off a second term as head of the world's third-biggest democracy.

In the capital Jakarta, some 26,000 police and soldiers were deployed while large crowds -- including placard-carrying students and factory workers -- chanted for change near parliament, which was barricaded with barbed wire.

The demonstrations have been fuelled by a proposed bill that includes dozens of legal changes -- from criminalising pre-marital sex and restricting contraceptive sales, to making it illegal to insult the president and toughening the Muslim-majority country's blasphemy law.

The protests are among the biggest student rallies since mass street demonstrations in 1998 toppled the Suharto dictatorship.

Passage of the reforms has now been delayed, while Widodo has said he would consider revising a separate bill that critics fear would dilute the powers of Indonesia's corruption-fighting agency, known as the KPK.

"Why is this law being revised?" said Lukmanul Hakim Ahbr, a 24-year-old Indonesian who said he returned from his studies in neighbouring Malaysia to join the protests.

"We students... reject any revision that will weaken the KPK," he added.

Some held banners that read: "Cancel regulations that threaten people's rights and the environment."

They are also demanding a probe on the deaths of two university students on Sulawesi island last week, including one who was shot during the anti-government protests. The police have denied responsibility.

On Monday, scuffles broke out between authorities and some 2,000 university students on Lombok, an island next to Bali where hundreds also rallied.

More than a thousand demonstrators gathered in the city of Bandung on Java island.

Ahead of Tuesday's inauguration of MPs, Indonesia's chief security minister Wiranto -- who goes by one name -- warned that any bloodshed would not be tolerated.

"I'm reminding protesters not to engage in violence or disrupt the inauguration of new lawmakers," the minister told a press briefing.

Officials have portrayed the protests as being hijacked by agitators aiming to disrupt government -- and suggested they were similar to May's deadly post-election riots that paralysed Jakarta.

Updating Indonesia's criminal code, which dates back to the Dutch colonial era, has been debated for decades but there was a renewed push this year backed by conservative Islamic groups.