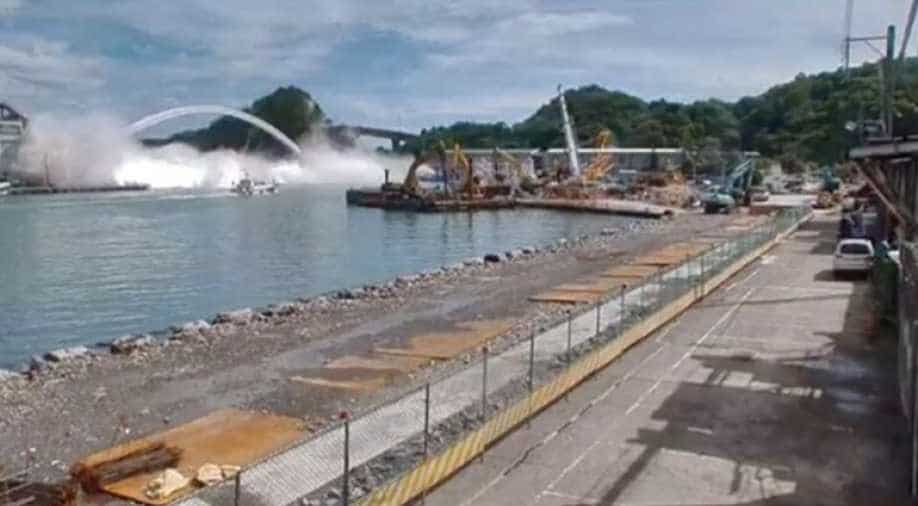 Twelve people were injured, including six Filipino and three Indonesian fishing workers, the Taiwanese driver of the petrol tanker, and two coastguard personnel.

Four bodies have been recovered from under a collapsed bridge in Taiwan, rescuers said Wednesday, as searchers continued for two people still missing when the structure smashed onto fishing boats moored underneath.

The National Fire Agency said two bodies were retrieved in the waters near a boat stuck underneath the shattered bridge while the others were found near a badly damaged boat that was dragged out from under the structure on Tuesday.

In the video, a vertical cable at the centre of the bridge's steel arch suddenly snaps.

The road then collapses into the water, crashing down on three fishing boats as a petrol tanker which nearly made it across also plunged into the water.

Twelve people were injured, including six Filipino and three Indonesian fishing workers, the Taiwanese driver of the petrol tanker, and two coastguard personnel.

The petrol tanker burst into flames at some point after it hit the water, sending a thick plume of black smoke into the air.

Prosecutors have launched a probe into the cause of the collapse.

The local landmark was completed in 1998 and spanned a small fishing port. It was featured in a number of TV dramas and commercials.

Taiwan was skirted by a typhoon on Monday night, which brought heavy rains and strong winds to parts of the east coast.

But at the time of the bridge collapse, the weather was fine.

Taiwan has a huge fishing industry and many of those who work on its boats are low-paid migrant workers from countries such as the Philippines, Indonesia and Vietnam.

Previous serious bridge incidents in Taiwan have mostly been related to typhoons.

In 2009, two bridges were badly damaged by Typhoon Morakot, which left more than 400 people dead.