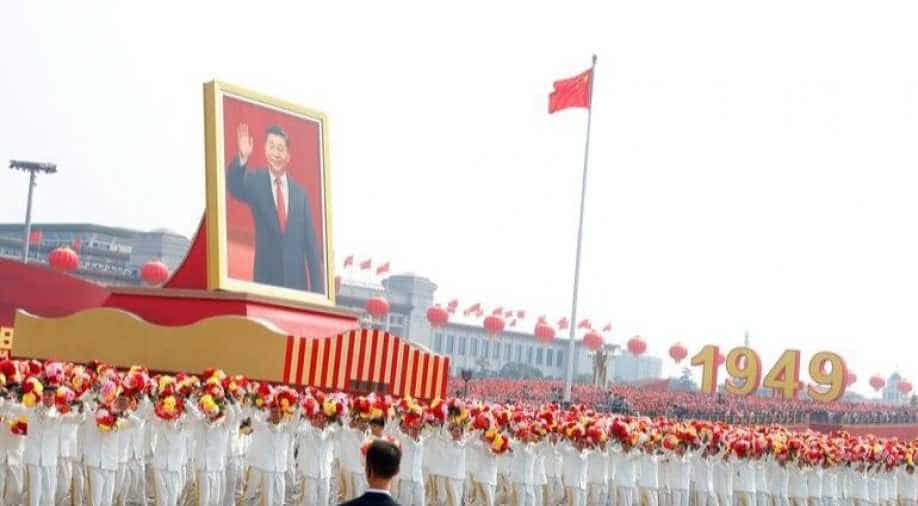 Taiwan's government condemns China's "dictatorship" on the 70th anniversary of the founding of the People's Republic.

Taiwan's government on Tuesday condemned China's "dictatorship" on the 70th anniversary of the founding of the People's Republic, saying the country was a threat to peace and trying to find excuses for its military expansion.

Defeated Nationalist forces fled to Taiwan in 1949 after losing a civil war to the Communists. China claims now democratic Taiwan as its sacred territory and has never renounced the use of force to bring it under Beijing's control.

President Xi Jinping, addressing a massive military parade in Beijing to mark seven decades of Communist Party rule, said China would promote the peaceful development of relations with Taiwan and "continue to strive for the motherland's complete reunification".

Taiwan's Mainland Affairs Council, responding to the parade and Xi's comments, said Taiwan would never accept "one country, two systems", the model of supposedly high autonomy Hong Kong and Macau have, which Beijing sees as eventually being the best way to win Taiwan over.

"The Chinese Communist Party has persisted with its one-party dictatorship for 70 years, a concept of governance that violates the values ​​of democracy, freedom and human rights, causing risks and challenges for the development of mainland China," it said.

"It's shouting about the struggle for unity, great rejuvenation and unification is only an excuse for military expansion, seriously threatening regional peace and world democracy and civilisation."

Taiwan has been democratic for more than 30 years, and China should use this moment to reflect and push for democracy, it added.

"The lifeline of the survival and development of mainland China is not tied to one person and one party," the council said.

Taiwan will not be bullied into accepting China's position, it added.

China has heaped pressure on Taiwan President Tsai Ing-wen, who faces re-election in January, believing she wishes to push for the island's formal independence, a red line for Beijing.

China has also been angered for expressions of support from Taiwan for anti-government protests in Hong Kong, which are expected again on Tuesday.

"Likewise, any ruler should carefully listen to the people's pursuit of freedom and democracy and respect the people's will", Tsai added.