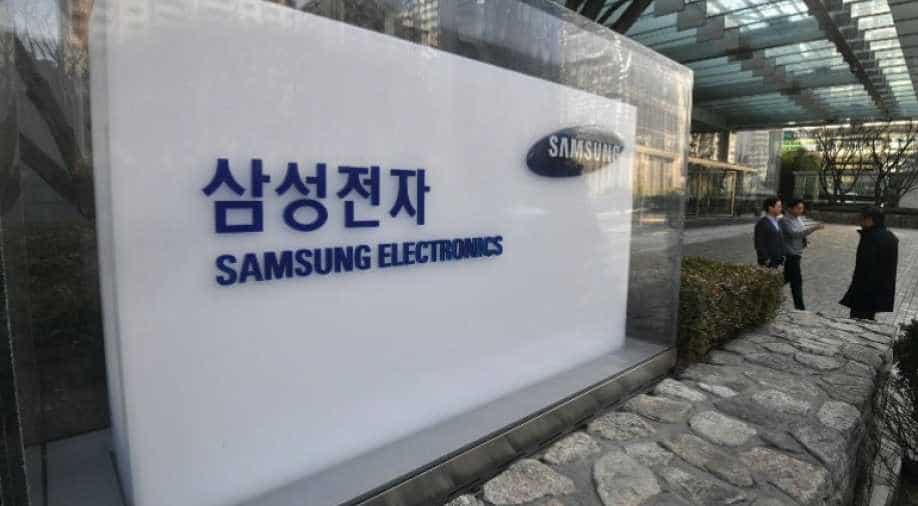 FILE PHOTO: The logo of Samsung Electronics is seen outside the Samsung building in Seoul, South Korea. Photograph:( AFP )

Samsung has enjoyed record profits in recent years despite a series of setbacks, including a humiliating recall and the jailing of its de facto chief.

The shock warning added to concerns about the broader tech sector after Apple sent shudders through world markets last week by slashing its revenue forecast blaming weak sales in China and citing the trade war.

Samsung — the world's top maker of smartphones and memory chips — has enjoyed record profits in recent years despite a series of setbacks, including a humiliating recall and the jailing of its de facto chief.

But operating profit during the October to December period was expected to be around 10.8 trillion won ($9.8 billion), down 28.7 per cent from a year earlier, Samsung said in an earnings estimate.

The figure was below market consensus of about 13.5 trillion won, according to market researcher FnGuide.

Sales dropped more than 10 per cent to 59 trillion won in the period, Samsung said.

It cited "lacklustre demand in the memory business and intensifying competition in the smartphone business" for the dismal outlook.

"Memory earnings fell significantly... due to weaker-than-expected demand amid inventory adjustments at data-centre customers," which led to a "greater-than-expected" drop in chip prices, it said.

"We expect earnings to remain subdued in the first quarter of 2019 due to difficult conditions for the memory business but strengthen in the second half."

But analyst Kim Sun-woo of Meritz Securities said worsening supply and demand for semiconductors and the structural challenges facing Samsung's smartphone business will hit profits throughout 2019.

Demand for DRAM memory chips "will hit a low in the fourth quarter of 2019", he added.

Samsung withholds net profit and sector-by-sector business performance data until it releases its final earnings report, which is expected later this month.

Shares in Samsung Electronics, the flagship subsidiary of the Samsung Group that dominates South Korea's economy, were down 0.5 per cent in afternoon trading.

Last week Apple said it expected to earn $84 billion in October-December, well down from the $89-$93 billion previously forecast as it blamed a steeper-than-expected "economic deceleration" in China and emerging markets.

The news battered world equities, with observers saying problems at the usually reliable US titan could point to broader demand weakness and the China-US trade war cited as a key factor.

"When Apple sounded the alarm bells for last quarter results, there was some thought the drops in China sales was an anti-Apple backlash due to escalating US-China tensions," said Stephen Innes, head of Asia-Pacific trade at OANDA. "But these Samsung results are quite damning suggesting there... (is) a broader-based retail and manufacturer slowdown afoot."

While Samsung leads the global smartphone market with a 20 per cent share, it faces mounting competition from Chinese rivals like Huawei — which surpassed Apple to take second place last year — offering quality devices at cheaper prices.

"Samsung is losing ground to Huawei, Xiaomi and other Chinese rivals in the huge China and India markets," Neil Mawston, executive director at market researcher Strategy Analytics, said in a report.

Samsung once also had a 20 per cent market share in China but has seen its sales tumble to less than one per cent of the world's largest smartphone market in the third quarter, and last month announced the closure of its factory in Tianjin.

It will reportedly roll out a new line-up of its flagship Galaxy handsets at next month's World Mobile Congress in Barcelona as it seeks to regain a competitive edge in a market segment it once dominated.

Samsung is also set to introduce the world's first bendable smartphone in the first half.

Its reputation suffered a major blow after a damaging worldwide recall of its Galaxy Note 7 devices over exploding batteries in 2016, which cost the firm billions of dollars and shattered its global brand image.

It also took another hit after the bribery conviction of Lee Jae-Yong — the son and heir of the group's ailing current chairman Lee Kun-hee.

The 50-year-old scion was a key figure in the scandal that ousted former South Korean president Park Geun-Hye following massive nationwide protests and was sentenced to five years in jail last year.

But he was released from jail in February last year after several of his convictions were quashed on appeal.