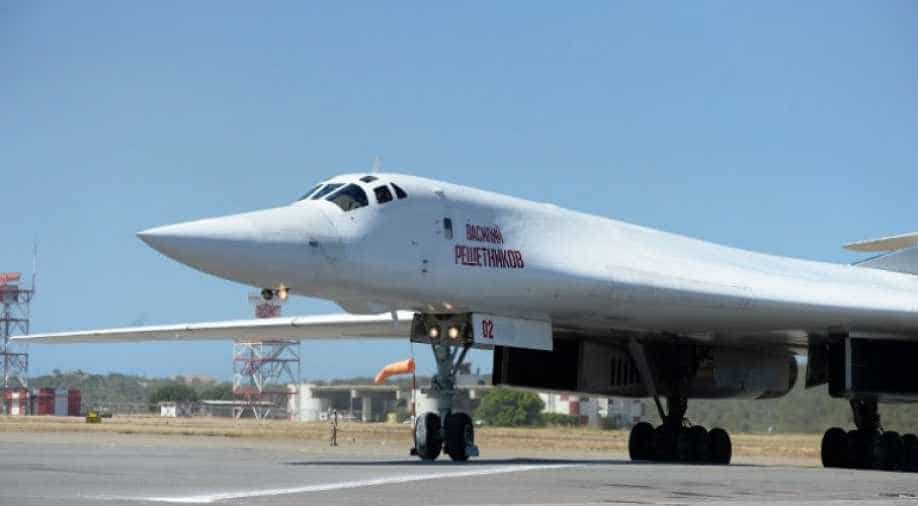 General Vladimir Padrino, the Venezuelan defence minister, welcomed about 100 Russian pilots and other personnel after the two TU-160s and two other aircraft landed at the international airport that serves Caracas.

Two Russian long-range strategic bombers landed in Venezuela Monday for what the government said were air force exercises aimed at strengthening the defence of the leftist-ruled South American country.

General Vladimir Padrino, the Venezuelan defence minister, welcomed about 100 Russian pilots and other personnel after the two TU-160s and two other aircraft landed at the international airport that serves Caracas.

Padrino said the deployment showed "we also are preparing to defend Venezuela to the last inch when necessary."

"This we are going to do with our friends because we have friends in the world who defend respectful balanced, relations," he said.

The commander of the Russian Airforce's long-range aircraft, General Sergei Ivanovich Kobulash, said the exercises would provide "a profound exchange of experience between pilots and technical staff" from both countries.

The development follows hot on the heels of a visit to Moscow last week by President Nicolas Maduro during which he had talks with Russian President Vladimir Putin, who expressed support for his beleaguered socialist government.

Maduro often accuses the United States of plotting against his government, which has overseen the plunge of a once-rich petrol state into a severe economic crisis.

Besides the two bombers, the deployment included an An-124 transport plane and an Il-62 passenger plane, according to a Russian military announcement in Moscow.

Padrino noted that Russian aircraft had visited before in 2013, but said their current deployment was part of a "new experience."

He said exercises would be held to "raise the level of interoperability of the aerospace defence systems" of both countries.

It was unclear how long the Russian deployment would last, and Padrino did not provide details about the exercises planned.

In recent years, Venezuela has purchased millions of dollars in military equipment from Russia, he said.

Former defence minister Raul Salazar said the exercises with Russia "are part of what is called psychological warfare."

"The purpose is to increase the perception that Venezuela is supported by Russia, China and Belarus, that it has the support of a power, in case another power tries to invade," Salazar told AFP.

Maduro on Sunday said Washington had set in motion a plan to overthrow him, with the support of neighbouring Colombia.

"Underway today is an attempt to disrupt the democratic life of Venezuela, coordinated directly from the White House," said Maduro, who claims he was the target of an August 4 drone attack hatched by Venezuela's opposition with the support of the US and Colombian governments.

Caracas' defence minister said "nobody in the world should fear the presence of these strategic fighter-bombers. We are builders of peace and not of war."

Padrino added however that other countries in the region had created "political and military imbalances" against which the Venezuelan government could not stand idly by -- an apparent reference to Bogota, which Caracas has accused of harbouring US military bases.