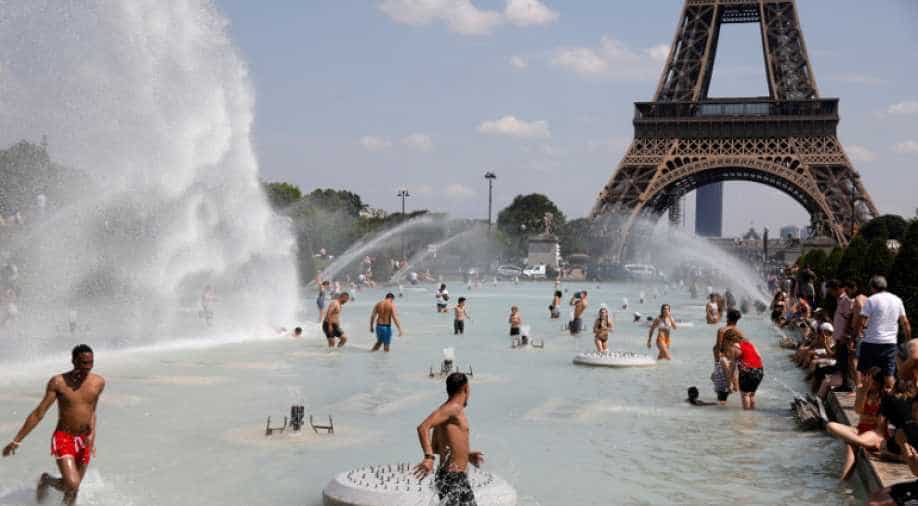 People cool off in the Trocadero fountains across from the Eiffel Tower in Paris as a heatwave hit much of the country, France. Photograph:(Reuters)
Follow Us

Rising heat due to climate change could lead to the loss of 80 million jobs by 2030, with poor countries worst hit, the United Nations said on Monday, as Europe sweltered in record temperatures.

A temperature rise of 1.5C by the end of the century could lead to a 2.2 per cent drop in working hours — equal to 80 million full-time jobs — costing the global economy $2.4 trillion, according to projections by the UN International Labour Organisation (ILO).

The ILO said people would be unable to work due to the health risks posed by higher temperatures.

“The impact of heat stress on labour productivity is a serious consequence of climate change, which adds to other adverse impacts such as changing rain patterns, rising sea levels and loss of biodiversity,” said ILO’s Catherine Saget.

Heat stress occurs when the body absorbs more heat than is tolerable. Extreme heat can cause heat-related illnesses, such as heat stroke and exhaustion, increase mortality, and exacerbate existing health conditions.

Agricultural workers — especially women, who make up the bulk of the 940 million labourers in the sector — will be most affected, the ILO said, accounting for about 60 per cent of all working hours lost due to heat stress by 2030.

If global temperatures rise as predicted, the construction industry will account for about 19pc of lost working hours, with the poorest countries in Southeast Asia and West Africa worst hit, the ILO added.

Transport, tourism, sport and industrial sectors are among those that will also be affected by rising heat, the ILO said.

“In addition to the massive economic costs of heat stress, we can expect to see more inequality between low and high-income countries and worsening working conditions for the most vulnerable, as well as displacement of people,” said Saget.

In 2015, countries signing the Paris Agreement set a goal of limiting a rise in average world surface temperatures to “well below” 2C (3.6F) above pre-industrial times, while “pursuing efforts” to limit rising temperatures to 1.5C (2.7F).

The World Meteorological Organisation said last week that 2019 was on track to be among the world’s hottest years on record, which would make 2015-2019 the hottest five-year period.

Europe has been in the grip of record-breaking heatwaves, with wildfires burning tracts of land in France and Spain at the weekend, and scorching temperatures across the continent killing at least seven people.