Left out of high-level talks, Ukraine tries other diplomatic channels 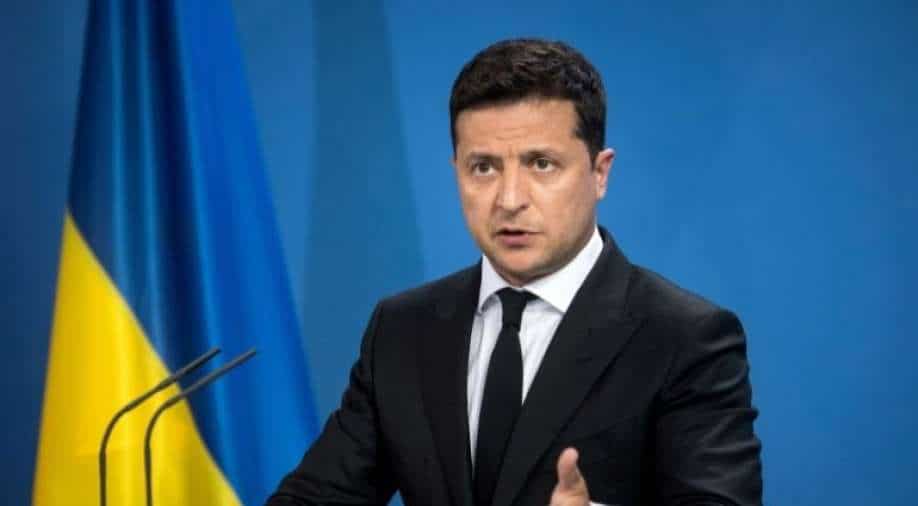 In this file photo, Ukrainian President Volodymyr Zelensky can be seen addressing a press conference in Kyiv Photograph:( Reuters )

The latest threat of invasion began last month, when Russia massed more than 100,000 troops along its borders

Peace negotiations are usually thought to involve two sides brought together by a mediator trying to tease out possible compromises, far from the anger and destruction of the battlefield.

But talks starting in Geneva on Monday on the 8-year-old war in Ukraine are different. The conflict — and an overtly threatened Russian invasion that the talks are intended to forestall — is in Ukraine. But Ukraine will be missing from two of the three negotiating sessions scheduled for this week.

Such a limited role for Ukraine in the talks has clearly unnerved the government in Kyiv. Fearing the talks will yield little or nothing, and with President Joe Biden’s statement that the United States will not intervene militarily if Russia invades, Ukraine has quietly pursued its own negotiating track with Moscow.

The latest threat of invasion began last month, when Russia massed more than 100,000 troops along its borders with Ukraine and demanded wide-ranging — and, to Western analysts, impossible — concessions from the U.S. and NATO on matters of European security.

Those were laid out in two draft treaties proposed by Moscow that the government in Kyiv — because it is not a member of the alliance — has no say over. President Vladimir Putin of Russia subsequently threatened to launch an invasion of Ukraine if the talks on its proposals should fail.

In effect, that made Ukraine “the hostage,” of Russia, said Kostiantyn Yelisieiev, a former Ukrainian ambassador to the European Union.

Moscow’s sidelining of Ukraine and its demand for direct talks with the U.S. and NATO were intentional, Yelisieiev said.

One of Russia’s key demands is that NATO exclude any possibility of Ukraine’s membership in the alliance — NATO has already rejected that demand — and halt all military cooperation with the country. Russia also insisted that the alliance halt all military activities throughout Eastern Europe and Central Asia.

“The issues concern all of Europe, including Ukraine, but Putin suggests discussions between Russia and the United States,” Yelisieiev said. “Russia in this way made an announcement of a sphere of influence. ‘You leave us the former Soviet space and do what you want elsewhere.’”

A Ukrainian delegation will take part in the third of the three rounds of talks, scheduled for Thursday in Vienna under the auspices of the Organization for Security and Cooperation in Europe. The U.S. has said it is coordinating closely with authorities in Kyiv.

“No decisions about Ukraine without Ukraine,” the Ukrainian foreign minister, Dmytro Kuleba, posted on Twitter last week, noting he will also meet with NATO officials in Brussels. “Part of a wide diplomatic effort to deter further Russian aggression.”

The current threat follows eight years of low-level conflict. Russia intervened militarily in Ukraine in 2014, annexing the Crimean Peninsula and fomenting separatist uprisings in two eastern provinces, leading to the deaths of about 13,000 people.

Given the stakes for Ukraine, the government of President Volodymyr Zelenskyy has decided not to rely wholly on the U.S.-led negotiations. Zelenskyy announced a separate, Ukrainian diplomatic initiative with Russia in late December, the specifics of which were later published in Russian newspaper Kommersant.

The 10-point Ukrainian plan, which is bound to be highly contentious in Ukraine, begins with three confidence-building steps — a cease-fire, an exchange of prisoners and the opening of crossing points for civilians on the front line in the eastern Ukraine war — then moves to political issues. The first point, the cease-fire, has already been implemented.

The political matters involve direct talks between Zelenskyy and Putin and a final point, No. 10, under which the Ukrainian government would submit to parliament laws granting self-rule to separatist areas and devolving some powers to these areas, according to Kommersant.

In the Russian interpretation, these laws would grant its proxies in eastern Ukraine veto power over foreign policy decisions by the central government, including NATO membership for Ukraine, potentially satisfying enough of Russia’s request to forestall a catastrophic war in Ukraine.

Western diplomats say the proposed laws leave wiggle room for interpretation and that Zelenskyy is unlikely to grant Moscow veto power over future NATO membership. The proposal says nothing about the aspiration for NATO membership written into Ukraine’s Constitution and has seemingly stalled after the cease-fire, announced Dec. 22.

Like so many other diplomatic efforts to end the war, this one is given little chance of success by most analysts, but it could serve other purposes. Ukraine can do “nothing” in diplomacy but wait for the possible outbreak of violence, said Oleksandr Danylyuk, a former secretary of the Ukrainian Security Council. “This is why Putin is doing this. It’s his goal to show that Ukraine cannot do anything.”

And the negotiating effort could have one lasting effect: Zelenskyy’s apparent willingness to negotiate over autonomy for the separatist regions and any hint of accepting neutrality between the West and Russia could cause a firestorm in Ukrainian politics.

To date, none of the diplomatic talks with Russia, whether with the U.S. or Ukraine, have slowed the stream of ominous statements from Russian officials that diplomats and analysts worry could be used to justify military action or prepare the Russian population for a war.

In July, Putin published an article arguing that Russia and Ukraine are essentially the same country, with a shared history and culture, suggesting a reason for unification.

The threats became more focused in August after the U.S. withdrawal from Afghanistan, when senior Russian security officials publicly taunted Ukraine that it, too, could soon lose the U.S. as a protector.

“The country is headed toward collapse, and the White House at a certain moment won’t even remember about its supporters in Kyiv,” Nikolai Patrushev, secretary of Russia’s Security Council, told Izvestia newspaper soon after the fall of Kabul.

In December, Putin, speaking to a gathering of generals and security officials, said Moscow might resort to “military-technical” means if Western nations “continue the obviously aggressive stance.”

A deputy foreign minister for Russia, Alexander Grushko, more explicitly linked a threat of Russian military force to a breakdown in the talks.

“The Europeans must also think about whether they want to avoid making their continent the scene of a military confrontation,” Grushko said. “They have a choice. Either take seriously what is put on the table or face a military-technical alternative.”

Echoing U.S. claims used to justify the invasion of Iraq in 2003, the Russian defense minister, Sergei K. Shoigu, claimed without providing evidence that Moscow had intelligence showing that American mercenaries had brought an “unidentified chemical component” into Ukraine.

Pro-Kremlin commentators have cheered the Kremlin’s tough stance as a Russian nationalist triumph.

One newspaper compared Moscow favorably to a gangster character in a Russian movie who, “raising his heavy fist and looking into the eyes of his interlocutor, gently asks again: Where is your strength America?”