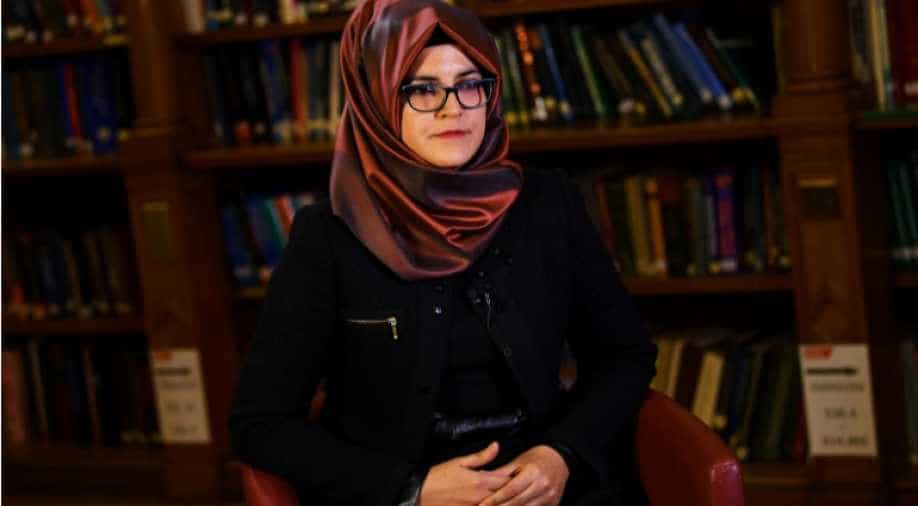 'I am disappointed by the actions of the leadership in many countries, particularly in the US,' Hatice Cengiz said. 'President Trump should help reveal the truth and ensure justice be served. He should not pave the way for a cover-up of my fiance’s murder. Let’s not let money taint our conscience and compromise our values.'

The fiancée of Jamal Khashoggi on Monday criticized President Donald Trump’s response to his killing, urging him to set aside US trade interests in the push for truth, and demanded Riyadh disclose more details to bring those who ordered it to justice.

Trump has hedged his criticism of Saudi leaders over Khashoggi, insisting he does not want to imperil a “tremendous order” of US $110 billion of weapons he says will support 500,000 US jobs - figures that experts say are highly exaggerated.

His fiancée, Hatice Cengiz, told an audience on a visit to London she was disappointed with Trump’s approach.

“I am disappointed by the actions of the leadership in many countries, particularly in the US,” she said.

“President Trump should help reveal the truth and ensure justice be served. He should not pave the way for a cover-up of my fiance’s murder. Let’s not let money taint our conscience and compromise our values.”

When asked who was ultimately responsible for the killing, Cengiz told Reuters in an interview in Turkish: “This took place inside a Saudi diplomatic mission ... In such circumstances, the Saudi Arabian authorities are responsible for this.”

Trump has said Prince Mohammed, who has consolidated control over Saudi security and intelligence agencies over the past three years, bore ultimate responsibility for the operation that led to Khashoggi’s killing.

She said the West is considered a stronghold of human rights and democracy so it should stand up to the killers of her husband-to-be.

Khashoggi, 59, entered the Saudi consulate in Istanbul on October 2 to obtain paperwork necessary for his upcoming marriage to Cengiz, a Turkish national. He did not walk out of the consulate. Cengiz first raised the alarm.

Saudi Arabia initially denied any involvement in Khashoggi’s disappearance but a Saudi official eventually attributed his death to a botched attempt to return him to the kingdom.

Later, Riyadh said the killing was premeditated and Prince Mohammed has vowed that the killers would be brought to justice.

Saudi Arabia has detained 18 people and dismissed five senior government officials as part of the investigation into Khashoggi’s murder. Some were members of a 15-man hit team, many of them Saudi intelligence operatives, who flew into Istanbul hours before Khashoggi’s death, Turkish security sources say.

“This incident, this assassination, took place in the Saudi consulate,” Cengiz said, speaking through a translator. “So the Saudi authorities probably know how such a murder took place.”

“They need to explain what happened,” said Cengiz, who was somber, guarded and appeared at times on the verge of tears.

When asked what she would say to Prince Mohammed if she ever got the chance to speak to him, she said: “I don’t think that will ever happen.”

Turkish President Tayyip Erdogan, who Cengiz praised, has urged Riyadh to disclose who ordered the murder and prosecutors have prepared an extradition request for 18 suspects from Saudi Arabia.

“The explanations given so far by Saudi Arabia are not sufficient,” Cengiz said. “I want to know the details of who is responsible.”

Asked if she held Crown Prince Mohammed or the Saudi royal family responsible, she said:

“I and my government would like all those responsible, from the person who gave this order to those who carried it out, to be brought to justice and punished under international law,” she said.

Cengiz said she had not been contacted by Prince Mohammed or the Saudi royal family, nor offered any condolences by them.

Cengiz met Khashoggi in May at a conference in Istanbul and their relationship blossomed. But the decision to marry in Istanbul, whose mosques reminded Khashoggi of his hometown Medina, set off a paper chase that ultimately ended in death.

Turkish law required that Khashoggi, who was divorced, provide proof that he did not have a wife and thus his trip to the consulate. Cengiz said she had been shown no recordings of what happened inside the consulate and that she got most of her information from the media.

“Like everyone else, I am still waiting for answers,” she said. “The world should know who instigated, were involved in and committed this crime.”