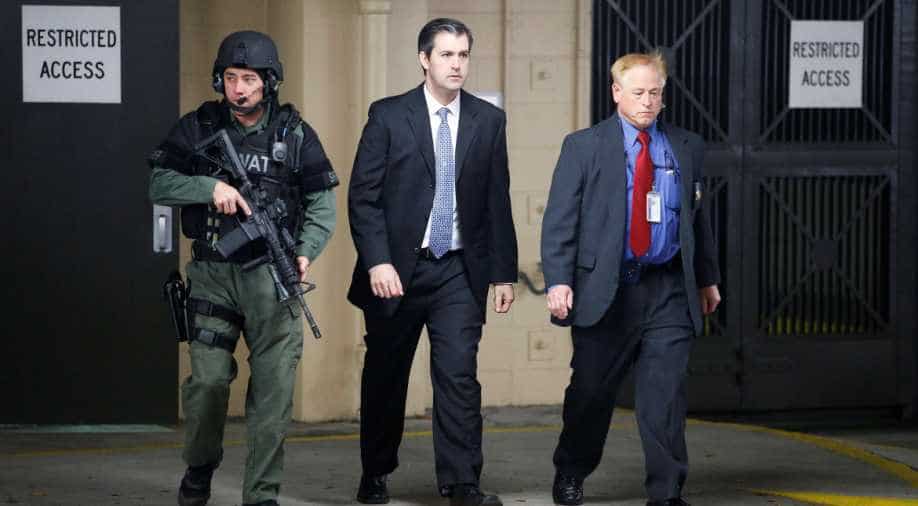 Former North Charleston police officer Michael Slager is escorted from the courthouse by security personnel while waiting on his verdict at the Charleston County Courthouse in Charleston. Photograph:( Reuters )

A South Carolina judge declared a mistrial on Monday after jurors weighing a murder charge against a white former South Carolina police officer who shot and killed a black motorist said they were deadlocked.

The video helped to make Slager a national symbol for a wave of police killings of black men in cities including New York, Baltimore and Ferguson, Missouri. The hung jury was likely to fuel fresh debate about racial bias in law enforcement and the US justice system.

"Despite our best efforts, we have been unable to come to a unanimous verdict," jurors said in a note on Monday, their fourth day of deliberations after four weeks of testimony in a Charleston courtroom.

Prosecutor Scarlett Wilson, who left the courtroom with tears in her eyes, later said in a statement her office would retry Slager.

"Justice will be had," Scott family lawyer Justin Bamberg told reporters. "I don't think there's a soul in the world who thinks that what Michael Slager did is okay."

Slager and his lawyers left the courthouse without commenting.

Only about one-third of at least 78 police officers across the United States charged with murder or manslaughter from an on-duty shooting since 2005 have been convicted, according to data collected by Philip Stinson, an associate professor of criminal justice at Bowling Green State University in Ohio. About half of those convicted pleaded guilty.

Slager, who testified during his state trial, told the jury of 11 white people and one black man how he felt "total fear" before shooting Scott, hitting him with five bullets.

Slager had pulled Scott over for a broken brake light. He said the motorist ran and refused orders to stop, then grabbed the patrolman's stun gun during a scuffle.

Prosecutors said Scott, who was unarmed, fled because he was behind on child support payments and feared arrest. They accused Slager of altering the crime scene by moving the Taser closer to the handcuffed body so he could claim Scott had taken it.

Jurors first indicated they were deadlocked on Friday. At the time, they said one member was holding out against a conviction, though they did not indicate whether the rest of the panel was settled on finding Slager guilty of murder or a lesser charge of voluntary manslaughter.

After resuming deliberations on Monday, they sent another note that said the majority of jurors were undecided and then requested explanation of legal terms critical to the case, such as malice and self-defense.

Judge Clifton Newman provided further guidance, but it did not result in the panel reaching a consensus. All 12 jurors would have to come to a unanimous decision on a charge for the jury to deliver a verdict.