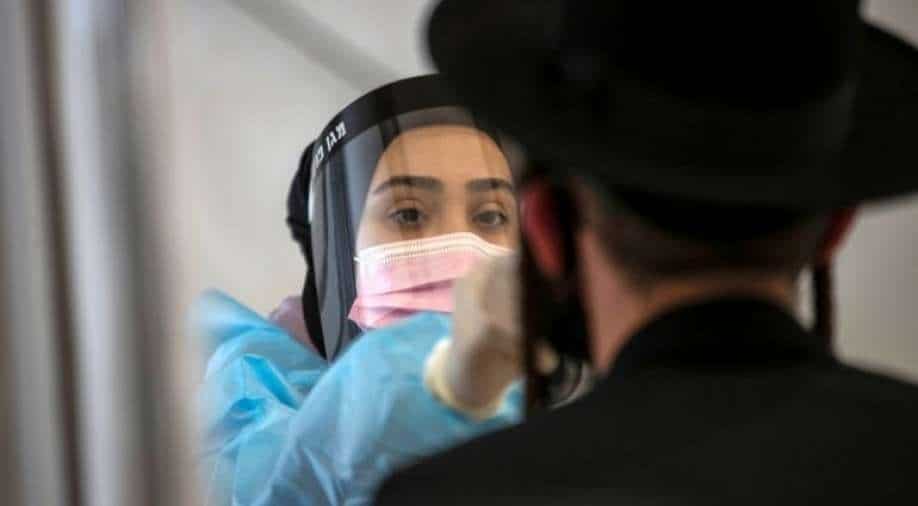 FILE PHOTO: A healthcare worker takes a swab sample from an Ultra-Orthodox Jewish man for the coronavirus disease (COVID-19) test, after returning from overseas, at Ben Gurion International Airport in Lod, near Tel Aviv, Israel April 13, 2021. Photograph:(Reuters)
Follow Us

Under an easing of coronavirus restrictions, the government went ahead with a plan to start letting in small groups of tourists from countries using vaccines it has approved

Israel reopened its borders to foreign tourists on Sunday after a fall in COVID-19 infections but said it would take time for visitors to start arriving and to revive the tourism industry.

Under an easing of coronavirus restrictions, the government went ahead with a plan to start letting in small groups of tourists from countries using vaccines it has approved.

Foreign airlines are also resuming flights they suspended when Palestinian militants began rocket attacks on Israel this month. A ceasefire has now halted the fighting, helping the government meet Sunday's target date for starting the plan.

But registration for the Tourism Ministry's plan opened only last week, so the number of visitors will initially be limited.

"It is unlikely that the first groups will arrive before the beginning of June," a Tourism Ministry spokeswoman said.

Under a pilot programme due to continue until June 15, Israel gave the green light to visits by 20 groups of between 5 and 30 tourists from countries including the United States, Britain and Germany.

Another 20 groups were chosen to be on standby if any of the first 20 tour operators did not meet Israel's conditions.

Tourism Minister Orit Farkash-Hacohen said the ministry was working to allow more tourists to enter to "rehabilitate the tourism industry and bring hundreds of thousands of people back into the workforce".

Israeli authorities believe that initially limiting tourism to small groups is the best way to monitor and contain the spread of COVID-19, especially new variants. The plan is to boost the number of groups in June and allow individual tourists to start visiting in July.

Visitors will need to show negative PCR tests before flying and to undergo further tests on arrival.

Israel has fully vaccinated about 55 per cent of its population and COVID-19 cases have dropped sharply.

El Al Israel Airlines Chairman David Brodet said separately on Sunday that he would step down. The government approved a $210 million bailout package for El Al this month that was conditional on steep spending cuts and the airline's owners injecting more cash.