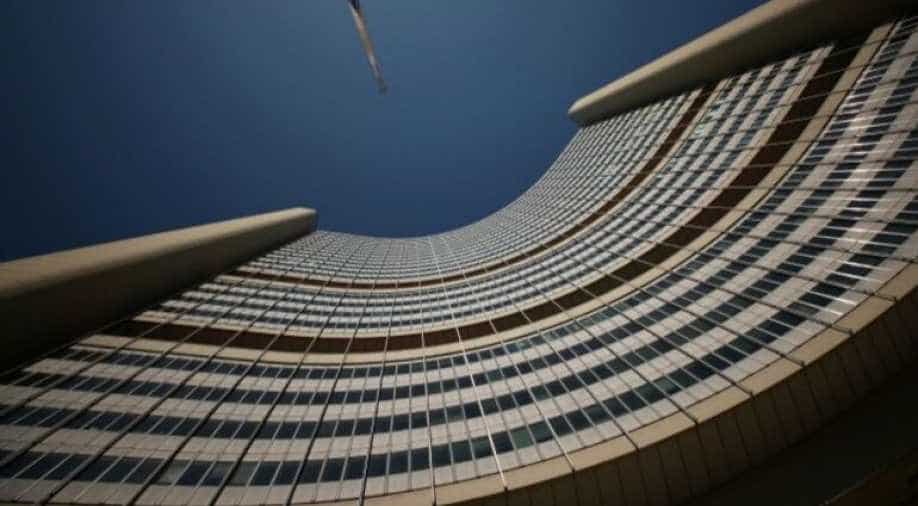 A flag with the logo of the International Atomic Energy Agency (IAEA) flies at half-mast at the United Nations headquarters in Vienna, Austria. Photograph:( Reuters )

The Paris-based agency said that compared with the same month in 2018, global demand fell by 160,000 barrels per day (BPD) in May the second year-on-year fall of 2019.

Mounting signs of an economic slowdown and a ratcheting up of the US-China trade war have caused global oil demand to grow at its slowest pace since the financial crisis of 2008, the International Energy Agency (IEA) said on Friday.

"The situation is becoming even more uncertain, global oil demand growth has been very sluggish in the first half of 2019," the IEA said in its monthly report.

The Paris-based agency said that compared with the same month in 2018, global demand fell by 160,000 barrels per day (BPD) in May the second year-on-year fall of 2019.

From January to May, oil demand increased by 520,000 BPD, marking the lowest rise for that period since 2008.

"The prospects for a political agreement between China and the United States on trade have worsened. This could lead to reduced trade activity and less oil demand growth," the IEA said.

Lowering its global demand growth forecasts for 2019 and 2020 to 1.1 million and 1.3 million BPD, respectively, the IEA cited China as the only major source of growth at 500,000 BPD for the first half of this year.

Demand growth in the United States and India was just 100,000 BPD from January to June, it said.

"The outlook is fragile with a greater likelihood of a downward revision than an upward one," the report said.

Supply curbs by the Organization of the Petroleum Exporting Countries and its allies, meanwhile, had tightened the oil market, helped by slower non-OPEC production.

But the IEA said that balance would be temporary as it forecast robust non-OPEC production growth in 2020 at 2.2 million BPD, predicting the global oil market would be "well supplied".

The IEA said economic concerns were overshadowing geopolitics, but the oil market continued to watch closely the tensions between the United States and Iran in the Gulf.