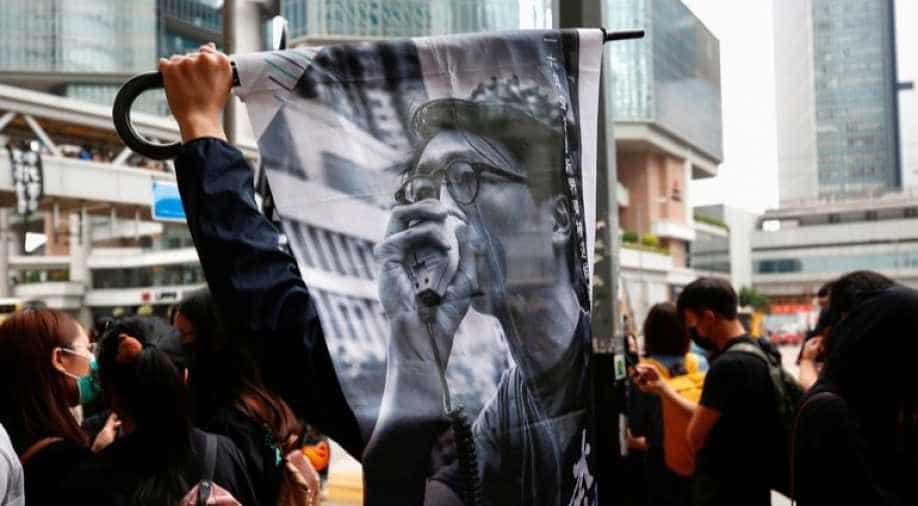 A Hong Kong pro-democracy activist jailed for six years for rioting in 2016 appeared in court to appeal against his sentence.

A Hong Kong pro-democracy activist jailed for six years for rioting in 2016 appeared in court on Wednesday to appeal against his sentence, as anti-government protests showed no signs of abating despite new emergency laws and widespread arrests.

Edward Leung, 27, one of the leaders of a movement advocating independence from China, and two other activists received the harshest sentences handed down to pro-democracy leaders since the city returned to Chinese rule in 1997.

Hundreds of Leung's supporters gathered outside the city's High Court and packed his courtroom on Wednesday, many wearing black masks in defiance of a ban on face masks invoked by authorities on Friday under colonial-era emergency laws.

Leung's hearing could become the latest flashpoint for anti-government protesters who have staged four months of demonstrations, some massive and violent, against leader Carrie Lam's administration.

Lam did not rule out asking Beijing for help in remarks on Tuesday as the Asian financial hub struggles to deal with protests that are damaging its economy.

More protests are expected on Wednesday and the coming week.

The former British colony is still recovering after a long weekend of violent protests that brought the city to a virtual standstill, with the unprecedented closure of its metro rail system, shops, ATMs, and mainland China banks.

What started as opposition to a now-withdrawn extradition bill has grown into a pro-democracy movement against what is seen as Beijing's tightening grip on the city, which protesters say undermines a "one country, two systems" formula promised when Hong Kong returned to Chinese rule.

The protests pose the biggest popular challenge to Chinese President Xi Jinping since he came to power in 2012 and are Hong Kong's worst political crisis since the 1997 handover.

The city's metro operator MTR Corp, which carries about 5 million passengers a day, said on Wednesday some stations would remain closed due to damage and it would be shutting services early again at 8 p.m. (1200 GMT), more than four hours earlier than normal.

The closure of some stations on Wednesday resulted in massive queues of people waiting for shuttle buses during the morning rush hour, with some people choosing to walk kilometres to the nearest station.

MTR Corp was forced to shut down after arson attacks on Friday night, an unprecedented move that largely paralysed transportation. There were only partial operations during the weekend and limited services through the start of the week.

Hong Kong's economy has been hit hard by the protests, with many businesses and stores repeatedly closing as the Asian financial hub faces its first recession in a decade.

Lam warned on Tuesday the city's businesses faced "a severe winter season", while a police spokesman said more than 200 shops and public utilities had been damaged since Friday's violent clashes.

More than 100 restaurants have closed over the past month, putting around 2,000 people out of work, a representative from an association of catering professionals told public broadcaster RTHK on Wednesday.

Authorities have described protesters as "militant activists" but many Hong Kong residents are also angry at the emergency powers, fearing their civil rights could be eroded.

More than 2,300 people have been arrested since June, while two teenagers have been shot and wounded in skirmishes with police. Scores of people, including police, have been injured.

The political sensitivities involved have been highlighted by a growing row after an executive of the U.S. National Basketball Association (NBA) team the Houston Rockets backed the protests.

Clinton said on her official Twitter account on Wednesday: "Every American has the right to voice their support for democracy and human rights for Hong Kong. Full stop."

Silver spoke up for freedom of speech, saying it was not up to the NBA to regulate what players, employees and team owners said. Chinese state media responded on Wednesday by accusing the NBA of endorsing violence and peddling a "secessionist pipe dream".

In a separate case, a top online gamer from Hong Kong who showed support for the protests was removed from an international tournament he won, forcing him to forgo prize money that media reports put at $10,000.

Blizzard Entertainment, via their brand Hearthstone, said the gamer identified as "Blitzchung" had violated rules and would not be allowed to play in any Hearthstone esports games for the next 12 months.