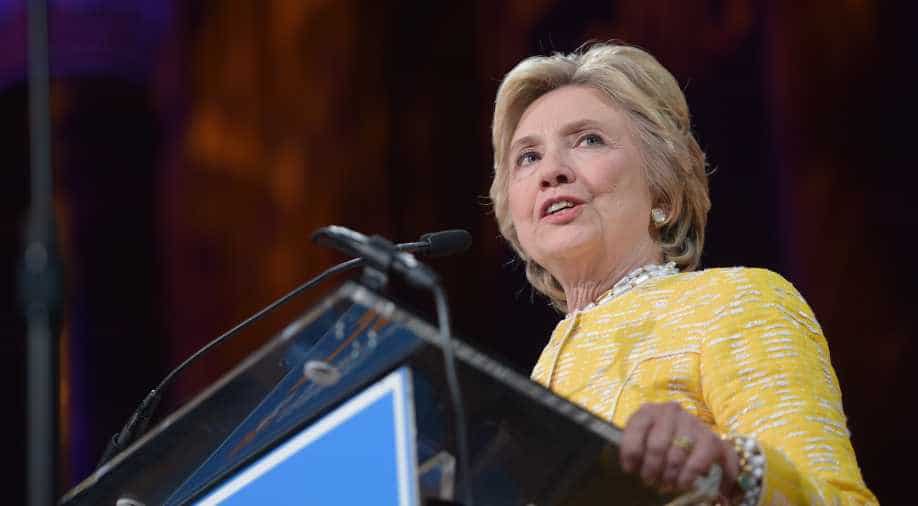 While she said she takes "responsibility" for her loss, Hillary Clinton still appeared reluctant to embark on serious and public self-criticism of her campaign loss.? Photograph:( AFP )

Hillary Clinton went a step further Wednesday in blaming her election loss to Donald Trump on cyber attacks by Russia, saying Americans including associates of the Republican president likely had a hand in the effort.

The Democratic nominee in last year's bitterly fought White House race addressed a technology conference in California and spoke at length about the campaign of "disinformation" against her that she said was led by Moscow and influenced the outcome of the campaign.

"The Russians, in my opinion, and based on the intel and counter-intel people I've talked to, could not have known how best to weaponize that information unless they had been guided," Clinton told the Recode conference, referring to an avalanche of false information, social media bots and hacks of Clinton campaign emails.

Some of those people helping the Russians, she said, had access to "polling and data information."

Asked by a moderator who those individuals might be, Clinton said: "We're getting more information about all of the contacts between Trump campaign officials and Trump associates with Russians before, during and after the election. So I hope that we'll get enough information to be able to answer that question."

"I'm leaning Trump," she said of the connections. "I think it's pretty hard not to."

Several US congressional committees have launched investigations into Russia's efforts to influence the 2016 election and its possible coordination with Trump campaign aides or associates.

The Department of Justice has appointed a former FBI director as a special counsel to head a separate, independent investigation.

Clinton, who ruled out a re-election bid, said the best example of such coordination took place a month before the vote, when hacked emails from Clinton's campaign chief John Podesta were released by WikiLeaks within an hour after disclosure in the press of a damning video of Trump using demeaning and vile language about women.

As she had done previously, Clinton also chalked up her defeat to actions by then-FBI director James Comey, who she said dealt her campaign "a tremendous hit" when he briefly re-opened an investigation into her use of a private email account and server just days before the election.

"He dumps that on me on October 28, and I immediately start falling," she said.

While she said she takes "responsibility" for her loss, Clinton still appeared reluctant to embark on serious and public self-criticism of her campaign loss.

Despite losing the indirect but all-important state-by-state electoral count, "I won three million more votes than the other guy," she said.

'Too Much and Never Enough': Donald Trump sues Mary Trump and western media

Legalising weed: Here's why Amazon is lobbying the US government

Hours after Erdogan rakes up Kashmir at UNGA, India calls for respecting UNSC resolutions on Cyprus