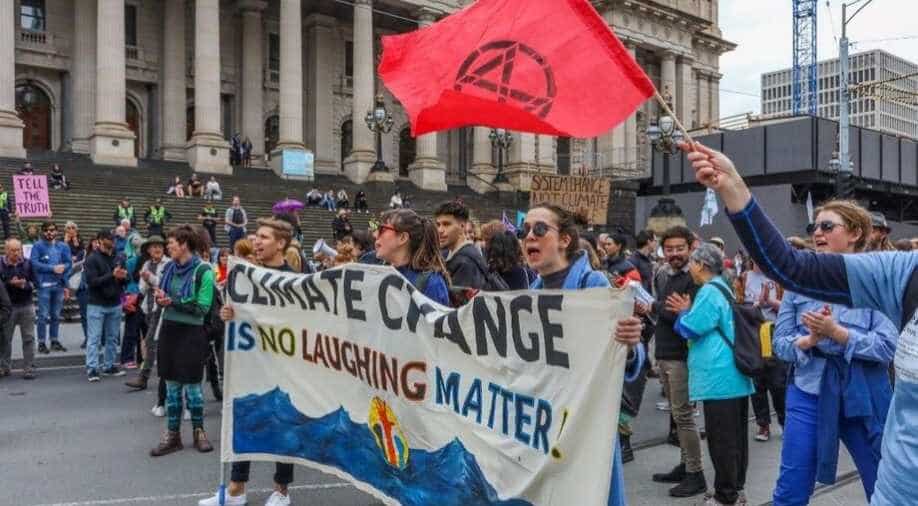 Protesters held a silent vigil on the steps of state parliament in Melbourne early Monday ahead of a march through the southern Australian city.

Protesters held a silent vigil on the steps of state parliament in Melbourne early Monday ahead of a march through the southern Australian city.

In Sydney, hundreds of protesters staged a sit-in on a busy inner-city road, while a small group of activists locked themselves to a bridge in Brisbane.

Meanwhile, demonstrators shut down part of Wellington, New Zealand's capital, by chaining themselves to a bright pink car.

They were the start of planned disruptions in 60 cities around the world over the next two weeks by Extinction Rebellion, which is warning of a looming environmental "apocalypse".

Thousands are expected to join other events this week in Australia, including a bee die-off enactment, a nude parade and a funeral procession for the planet.

"We have tried petitions, lobbying and marches, and now time is running out," Australian activist Jane Morton said.

"We have no choice but to rebel until our government declares a climate and ecological emergency and takes the action that is required to save us."

Australia is ruled by a conservative government that has resisted taking comprehensive action to tackle climate change, while backing lucrative coal exports.

Prime Minister Scott Morrison last month snubbed a United Nations climate summit after he was not invited to speak because of his lack of new climate announcements.

"Our governments are lying to us about the state of the climate and ecological emergency," Melbourne-based climate activist Christine Canti told AFP.

"I have got four small young children and I want to be able to look them in the eye and tell them when I found out the extent and the severity of the crisis... I did absolutely everything within my power to be able to try and reverse that."

Extinction Rebellion's tactics in Australia have prompted senior conservative politicians to call for protesters' welfare payments to be cut and for public denunciations.

"People should take these names and the photos of these people and distribute them as far and wide as they can so that we shame these people," Australian Home Affairs Minister Peter Dutton said on radio last week, referring to the Extinction Rebellion protesters.

"Shame them because of the actions they have committed and because they're acting outside of the law and against community standards. Let their families know what you think of their behaviour."

In the northern Australian state of Queensland, home to huge coal mines and Dutton's electorate, harsher penalties are being considered in response to the regular disruption of peak-hour traffic.

\Extinction Rebellion has scheduled non-violent protests chiefly in Europe, North America and Australia over the next fortnight.

Events will also be held in India, Buenos Aires and Cape Town.

An "opening ceremony" Sunday evening attracted hundreds of people to central London, where plans are in place to shut down key sites including Westminster and Lambeth bridges, in addition to protests outside key government departments.

Hundreds of activists barricaded themselves inside a Paris shopping centre for hours over the weekend, unfurling banners with slogans such as: "Burn capitalism, not petrol" above restaurants and fashion boutiques.

In Delhi, one of the world's most polluted cities, dozens of protesters staged another preliminary event on Sunday by holding a "die-in" on a road in the heart of India's capital.

Holding up hands covered in red paint and signs such as "There is no planet B", they called on the Indian government to act to tackle climate change.

Extinction Rebellion was established last year in Britain by academics and has become one of the world's fastest-growing environmental movements.