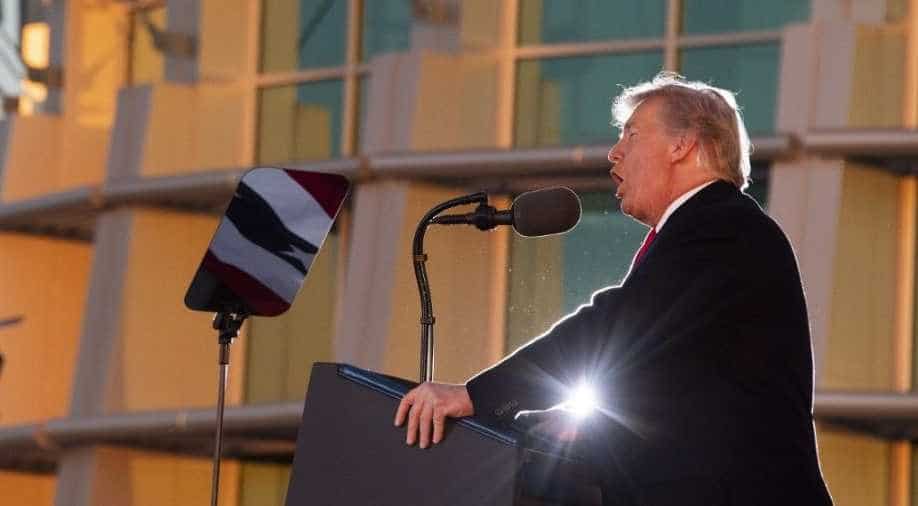 The Republican president tweeted that US Senator Mitt Romney was a 'pompous 'ass' who has been fighting me from the beginning.'

US President Donald Trump on Saturday opened a new front in the impeachment battle that threatens his administration, blasting a prominent member of his party for criticizing his push to get foreign nations to probe a leading Democratic rival.

The Republican president, who launched a stream of invective at Democrats and the media this week as an impeachment probe in Congress widened, tweeted that US Senator Mitt Romney was a "pompous 'ass' who has been fighting me from the beginning."

The Utah Republican said Trump's appeal to China was "wrong and appalling."

In a later tweet, Trump said he was hearing that people in Utah regretted electing Romney to the Senate in 2018. "I agree! He is a fool who is playing right into the hands of the Do-Nothing Democrats! #IMPEACHMITTROMNEY," Trump wrote.

I’m hearing that the Great People of Utah are considering their vote for their Pompous Senator, Mitt Romney, to be a big mistake. I agree! He is a fool who is playing right into the hands of the Do Nothing Democrats! #IMPEACHMITTROMNEY

Trump also defended again as "appropriate" the July 25 phone call with Ukrainian President Volodymyr Zelenskiy that triggered the impeachment inquiry in the Democratic-controlled House of Representatives and said his call for China to investigate Biden and his son Hunter was linked to corruption, not politics.

Another Republican senator, Susan Collins of Maine, on Saturday also criticized Trump for exhorting China to investigate the Bidens, calling it "completely inappropriate" in remarks to reporters at an event in her home state, according to the Bangor Daily News.

"I thought the president made a big mistake by asking China to get involved in investigating a political opponent," Collins said, according to the local report.

House Democrats are examining whether there are grounds to impeach Trump based on a whistleblower's complaint that said he asked Zelenskiy to help probe the Bidens. Hunter Biden was on the board of a Ukrainian natural gas company for several years.

There is no evidence of wrongdoing by either the former vice president or his son.

Secretary of State Mike Pompeo, a Trump ally, said on Saturday the State Department had issued an initial response to a request by the House Foreign Affairs Committee for documents tied to US contacts with the Ukrainian government. The panel issued Pompeo a subpoena on September 27.

"The State Department sent a letter last night to Congress, which is our initial response to the document request. We will obviously do all the things we are required to by law," Pompeo said in a news conference in Greece. He did not elaborate on the contents of the letter.

An official from the House Foreign Affairs Committee said in a statement to Reuters that Pompeo had "failed to meet the deadline to produce documents required by the subpoena," but confirmed the State Department had contacted the three House committees involved in the probes.

"We hope the department will cooperate in full promptly," said the official, who spoke on condition of anonymity.

Pompeo, who has acknowledged he listened to the July 25 call between Trump and Zelenskiy, objected last week to efforts by Democrats to obtain depositions from current and former department officials.

Asked at another event on Saturday if there were any red flags in the Ukraine saga that required further investigation, Pompeo said he did not think the audience was interested in hearing about the issue."This is what's wrong, when the world doesn't focus on the things that are right, the things that matter, the things that impact real people's lives and instead you get caught up in silly gotcha game?" he said.He also addressed a notion Trump has long held that Ukraine interfered in the 2016 US presidential election, a theory that runs counter to the US intelligence community's findings that it was Russia that meddled in the campaign.

Pompeo said, "governments have an obligation and indeed a duty to make sure that elections happen with integrity, without interference from any government, whether that's the Ukrainian government or any other."

Lawmakers are looking at whether Trump jeopardized national security and the integrity of US elections for personal political gain. Trump has called the impeachment investigation a "hoax" and accused the media and Democrats of corruption.

Rudy Giuliani, Trump's personal lawyer, told Reuters in a phone interview on Saturday that the president in the July 25 call had not offered his Ukrainian counterpart any "quid pro quo" for his cooperation in probing Biden and his son.

"One thing clear about the conversation is, there's no quid pro quo," said the former New York mayor, who has emerged as a central figure in the scandal. The House Intelligence Committee has issued a subpoena to Giuliani, setting an Oct. 15 deadline for him to turn over documents related to his work with Ukrainians on Trump's behalf.

House Democrats subpoenaed the White House for documents on Friday. White House spokeswoman Stephanie Grisham said the subpoena "changes nothing" and that it would be ultimately shown that Trump did nothing wrong.

The probe could lead to approval of articles of impeachment - or formal charges - against Trump in the House. A trial on whether to remove Trump from office would then be held in the Republican-controlled Senate.

A two-thirds majority of the senators present would be needed to oust Trump, which means 20 Republicans would have to jump ship if all the Democrats and the two independents who caucus with Democrats form a united front.

Although Trump's Senate firewall has no visible cracks so far, Romney's willingness to step out of formation and criticise Trump over his calls for foreign investigations of a political opponent could act as a catalyst for others.

Romney savaged Trump during the 2016 campaign, calling him a "con man" who was unfit for the presidency, but the two men later set aside their differences. Trump endorsed Romney's political comeback last year.