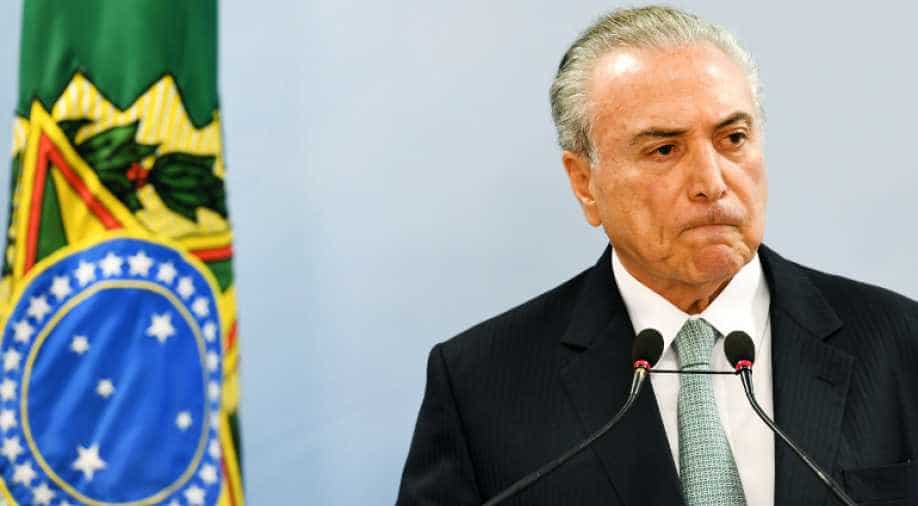 Several thousand people demonstrated in Rio de Janeiro, shouting 'Temer out!' while about 2,000 held a similar rally in the capital Brasilia||Both protests ended in minor clashes with riot police

Brazil's President Michel Temer defiantly refused to step down Thursday after being put under investigation for allegedly authorising payment of hush money to a politician imprisoned for corruption.

Several thousand people demonstrated in Rio de Janeiro, shouting "Temer out!" while about 2,000 held a similar rally in the capital Brasilia. Both protests ended in minor clashes with riot police.

Around 24 hours after a report in O Globo newspaper revealed that Temer had been caught on tape allegedly agreeing to bribe former speaker of the lower house Eduardo Cunha, he already faced eight formal requests for his impeachment.

There were also signs that his ruling center-right coalition was in danger, with some allies calling for his resignation. The culture minister, Roberto Freire, resigned and there were indications that the urban affairs minister would follow.

The Supreme Court piled on the pressure by greenlighting a formal investigation into Temer.

Despite all the calls for his head, the veteran center-right politician -- who took over last year after the impeachment of leftist president Dilma Rousseff -- came out swinging.

Temer highlighted signs this week that Brazil's two-year recession is coming to an end and claimed that "optimism was returning" thanks to a program of austerity reforms that he is trying to pass in Congress.

Now "those efforts may come to nothing," he warned, calling for a "full and very rapid" investigation at the Supreme Court.

It remained unclear whether Temer's defiance will be enough, with cracks growing in the ruling coalition, which is centered on Temer's PMDB party and the PSDB Social Democrats, along with a coalition of smaller parties.

Earlier, a PSDB leader, Ricardo Tripoli, told AFP that "if the evidence is confirmed, then we will ask our (ministers) to leave the government."

The Sao Paulo stock market reacted in panic to the specter of Brazil losing its second president in just over 12 months.

The Bovespa index crashed more than 10 percent after opening, triggering an automatic suspension of trading for 30 minutes. It closed 8.8 percent down.

Investors have been counting on Temer pushing through the austerity reforms, which include a raising of the minimum retirement age, so that Brazil's bloated public finances can be brought under control.

The measures are unpopular with most Brazilians, however, and Temer can expect little backing from the streets.

"As a Brazilian citizen I am obliged to demand our president's resignation and direct elections so that Brazil can decide its future," said history professor Jose Vicente, 51, who was at the Rio protest.

The scandal started with Globo's report late Wednesday that Temer had been secretly recorded while talking to Joesley Batista, an executive from the meatpacking giant JBS, on March 7.

On the tape, which was made public Thursday, Batista told Temer that he was paying money every month to Cunha "to keep things under control" and Temer replied: "You need to keep doing that, OK?"

The conversation, which was provided to prosecutors as part of a plea bargain with Batista, is now evidence with the Supreme Court. It has been interpreted as referring to bribes given to Cunha to make sure that he didn't spill secrets to prosecutors himself.

A separate secret recording made by Batista allegedly caught Senator Aecio Neves, head of the PSDB party and a close Temer ally, asking him for a bribe of two million reais, or around $600,000.

Globo published what seemed to be pictures showing men delivering a suitcase of cash for Neves, who was suspended Thursday from his position.

The scandal is the latest shockwave from the wider "Car Wash" graft probe ripping through Brazilian politics, involving vast bribes and embezzlement.

Until now Temer has managed to stay above the fray, enjoying presidential immunity for alleged crimes prior to his mandate.

However, the hush money claims date from well within his time in office and the Supreme Court probe puts him in the firing line.

If he resigns he would no longer have his case handled by the Supreme Court, but be moved to what are seen as far more aggressive, quicker-acting lower courts.

If he stays, Congress could launch impeachment proceedings but that would depend on him losing his base.

"That's why today the main question is to know whether the parties that form the government's base will leave," said Thomaz Pereira, constitutional law professor at the Getulio Vargas Foundation in Rio.