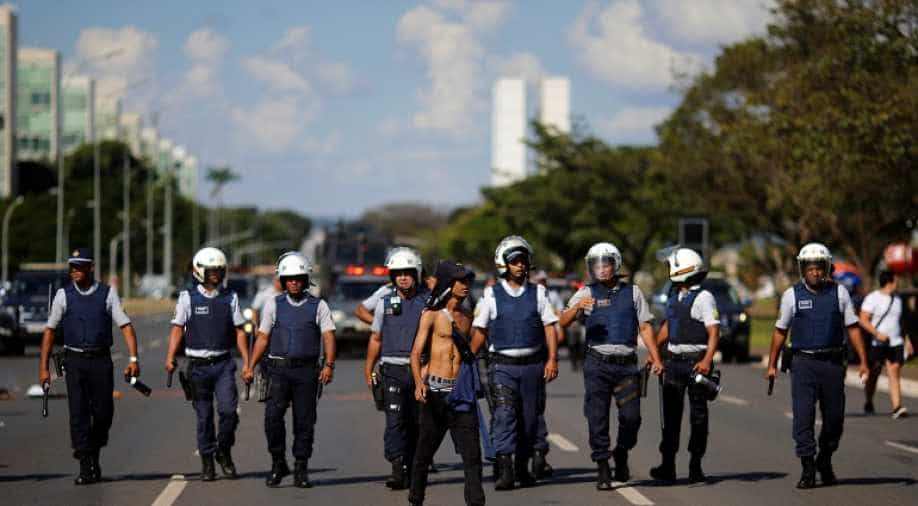 Riot-police are seen in line behind an university student during a protest against cuts to federal spending on higher education planned by Brazil's President Jair Bolsonaro's right-wing government in Brasilia, Brazil May 15, 2019. Photograph:( Reuters )

Brazil's National Student Union called for protests against what it called spending cuts, after the Education Ministry said it was freezing nearly a quarter of discretionary spending due to the government's precarious fiscal situation.

Tens of thousands of protesters gathered in cities across Brazil on Wednesday to rally against education spending freezes in the biggest demonstrations yet against President Jair Bolsonaro, who called marchers "useful idiots and imbeciles."

Brazil's National Student Union called for protests against what it called spending cuts, after the Education Ministry said it was freezing nearly a quarter of discretionary spending due to the government's precarious fiscal situation.

The marches in over 200 cities, according to a count by the Globo TV network, mark the first national protests against the administration of the far-right Bolsonaro, whose poll numbers are falling as he struggles with a weak economy, rising unemployment, an unruly coalition in Congress and infighting within his cabinet.

Speaking in Dallas, Texas, where he travelled to attend a gala dinner, Bolsonaro denied his government had cut education budgets and cast the protests as a partisan spectacle.

"They are useful idiots, imbeciles, who are being used as the manoeuvring mass of a clever little minority who make up the nucleus of many federal universities in Brazil," he said.

A peaceful rally of thousands in central Rio de Janeiro turned violent as the protest was ending, with unknown assailants setting a bus ablaze and shooting fireworks at police, who responded with tear gas to break a crowd up. There was no word on any injuries.

In the capital Brasilia some 7,000 students and university professors marched to Congress, carrying signs against the cuts. One said: "Education is not an expense, it is an investment." Another read: "Without investment there is no knowledge."

"Our message to Bolsonaro is that society will not accept these cuts of 30 percent," said marcher Luis Antonio Pasquetti, head of the National University of Brasilia's teacher union.

There was no official nationwide crowd estimate available, but the protests were likely the largest such gatherings since the 2016 impeachment of former President Dilma Rousseff.

Called to explain the cuts to lawmakers in Congress, Education Minister Abraham Weintraub blamed the situation on the legacy of the previous government, while defending a shift away from spending on universities to favor elementary schools.

"The priority is preschool, elementary school and technical school," he said. "A scientific, technical, number-based, efficient and managerial approach is vital to save this country from the economic stagnation of the last 20 years that we are living."