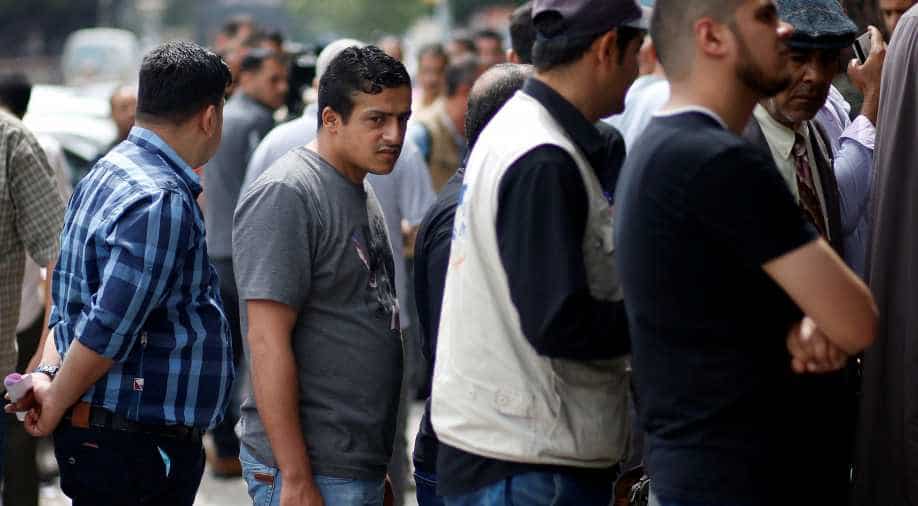 Public servants of the Palestinian Authority queue to receive their salaries outside a bank in Gaza City May 3, 2018 Photograph:( Reuters )

The Palestinian Authority cut salaries for its staff in Gaza by 20 percent on Thursday and failed to make up for skipping the previous month's pay, leaving civil servants in the impoverished territory fuming they were pawns in a factional power struggle.

Some 38,000 civil servants in the Gaza Strip learned of the new disruptions to their incomes upon arriving at their banks on payday, intent on withdrawing cash ahead of the Muslim holy month of Ramadan, which begins on May 16.

Last month, they were not paid at all. Many were hoping for two months pay this month, but instead received a reduced rate of a single month's pay, with no explanation.

PA salaries in the other Palestinian territory, the Israeli-occupied West Bank, were paid in full.

The Islamist group Hamas seized control of Gaza from Palestinian President Mahmoud Abbas in 2007, prompting Israel and Egypt to clamp down on the territory, where 2 million people live under a de facto blockade with the world's highest unemployment rate.

In an Egyptian-mediated bid to end the rift and reunite the two Palestinian territories, Hamas said last year it would cede the territory's control to Abbas's authority. But many Gazans still feel like they are being used as pawns in a power-struggle between the two groups.

"If they've failed to resolve this issue through dialogue, it can't be resolved by (using) the poor employee," said Eyad Kalloub, a 40-year-old civil servant, as he queued at his bank.

The Gaza wage cuts were the second round in as many years imposed by the Palestinian authority, which still administers the payroll for civil servants in the territory run by Hamas.

In April 2017, Abbas slashed Gaza salaries by 30 percent. He has also slashed PA staff numbers in Gaza from 60,000 last year, by ordering early retirement for nearly a third of employees.

Palestinian Authority officials said at the time that those moves were meant to pressure Hamas to relinquish Gaza control. However, last month they blamed the latest hold-up in wages on technical problems.

Economists said the PA cuts would shrink the tax revenue collected in Gaza by Hamas - which it uses to pay 40,000 employees it has hired in the enclave since 2007.

That exacerbates Hamas budgetary shortfalls caused by Egypt's closure of smuggling tunnels from its Sinai peninsula to Gaza. The Islamist faction had collected tax on goods brought in through the tunnels.

More than half of Gazans depend on international aid, and 43.6 percent of workers are unemployed, the highest rate in the world. Basic utilities such as water purification and power have deteriorated.

Israel, which has fought three wars in Gaza in the decade since Hamas took over, bars a range of goods that it says could have military uses from entering the territory, making reconstruction difficult and costly.

Jamal Abu Gholy, 38, a civil servant, came to his Gaza bank hoping to draw on his April salary, only to learn that it had not been deposited. Instead, he owed the bank for an overdraft.

"What shall I do about Ramadan?" he asked, thinking of the festive meals which Muslims break their daily fasting over the course of the month. "I can't just put out cheese and jam. We tell President Abbas: please show mercy towards us."