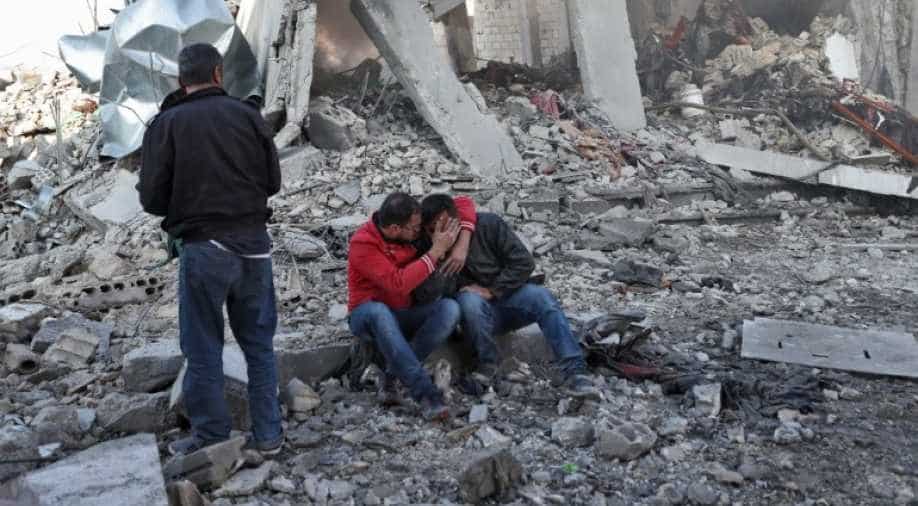 A Syrian man comforts another on the rubble of a building after a reported Russian airstrike on a popular market in the village of Balyun in Syria's northwestern Idlib province Photograph:( AFP )

The air raids in the jihadist-run northwestern region of Idlib also wounded several others, the Syrian Observatory for Human Rights said.

The air raids in the jihadist-run northwestern region of Idlib also wounded several others, the Syrian Observatory for Human Rights said.

Air strikes by regime ally Russia killed four civilians including a child in the village of Al-Bara in the south of the region, the Observatory said.

An AFP correspondent at the scene saw rescue workers pick through the rubble of a two-storey home whose concrete roof had collapsed.

Rescuers carried away the body of a victim wrapped in a blanket on a stretcher.

Russian raids also killed nine civilians including three children in the nearby village of Balyun, the Observatory said.

Crude barrel bombs dropped by government helicopters killed five civilians including three children in the village of Abadeeta, also in the same area.

In the southeast of the embattled region, a raid by a regime aircraft killed another child in the village of Bajghas, the Observatory said.

The Britain-based monitor, which relies on a network of sources inside Syria, says it determines the provenance of an air strike by looking at flight patterns and the aircraft and munitions involved.

The Idlib region, which is home to some three million people including many displaced by Syria's civil war, is controlled by the country's former Al-Qaeda affiliate.

The Damascus regime has repeatedly vowed to take back control of Idlib.

Syrian President Bashar al-Assad's forces launched a blistering military campaign against the region in April, killing around 1,000 civilians and displacing more than 400,000 people from their homes.

A ceasefire announced by Moscow has largely held since late August.

But the Observatory says deadly bombardment and skirmishes have persisted, with more than 200 civilians killed in the region since the deal.

Syria's war has killed over 370,000 people and displaced millions from their homes since beginning in 2011 with the brutal repression of anti-Assad protests.