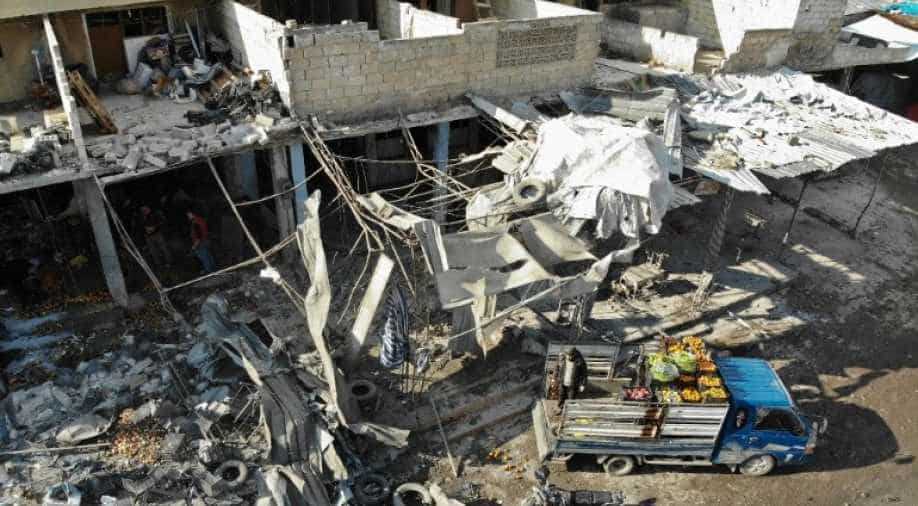 Syria's bloody eight-year-long conflict has killed more than 370,000 people and displaced millions since it started in 2011.

More than 100 kilometres (60 miles) to the north, a separate Turkish artillery attack on a Kurdish-held city in Aleppo province killed 11 civilians, including eight children, the Syrian Observatory for Human Rights said.

Syria's bloody eight-year-long conflict has killed more than 370,000 people and displaced millions since it started in 2011.

It continues to claim scores of civilian lives, especially in areas outside government control.

In the province of Idlib, largely under the control of a group dominated by a former Al-Qaeda affiliate, regime air raids killed 13 civilians in a market in the town of Maaret al-Numan, the Britain-based Observatory said.

An AFP correspondent saw rescue workers carry a wounded man away on a stretcher while a body lay motionless amid spilt oranges and bags of onions.

Maher Mohammed, 35, a vendor in the market, said it was the most frightening bombardment he had witnessed in years.

"We ran inside the shops and threw ourselves on the ground," the father of five told AFP.

"They bombarded half the market. Our neighbours were killed," as were two women in a car who had come to do some shopping, he said.

The Observatory said six others died in Russian and regime bombardment in other parts of the province, including a woman and her two children in a Russian strike on an Idlib prison.

On the southeastern edge of the region, regime forces and armed groups were locked in heavy clashes, with almost 100 fighters killed in two days, according to the war monitor.

The battles on the fringes of Idlib since Saturday are the most deadly since a Russia-brokered ceasefire went into effect in late August, it said.

Fifty-four regime fighters had been killed, while 47 of their foes including 33 jihadists had also lost their lives since Saturday, the Observatory said.

President Bashar al-Assad has long maintained that his government will eventually reimpose its control over the northwestern region on the border with Turkey.

During a meeting on Monday with Russia's special envoy for Syria, Alexander Lavrentiev, Assad agreed to "continue the fight against terrorism" so that Idlib would not become "a permanent haven for terrorists," the presidency said.

The late August ceasefire came months into a devastating Russia-backed regime offensive that killed around 1,000 civilians and ousted hundreds of thousands from their homes.

But sporadic clashes and deadly Russian and regime bombardment on the jihadist-held bastion have continued, with 179 civilians including 45 children killed during that time.

In the strategic city of Tal Rifaat, controlled by local Kurdish fighters, a Turkish artillery attack hit near a school as students were leaving the building.

Most of the 11 civilians killed in the shelling had been displaced from the Afrin region captured last year by Turkish troops and their Syrian proxies, Observatory head Rami Abdel Rahman said.

Footage released by Kurdish-run media purported to show bloody and bandaged young men being carried into a crowded medical facility after the attack.

Wrapped in thick wool blankets, the corpses of the deceased were lined up on the floor of an empty room in the same facility, in the footage.

Tal Rifaat, a strategic town 20 kilometres (12 miles) south of Turkey's frontier, is the site of regular confrontations between Turkish-backed forces and Kurdish fighters.

But Russia intervened to stop the planned offensive.

In October, it said it agreed to work with Turkey to remove all YPG militia "elements and their weapons" from Tal Rifaat.

Tal Rifaat is held by local Kurdish fighters displaced from Afrin, the Observatory head said, adding that Russian forces and regime troops are also currently deployed inside the town.

Turkey in October launched a cross-border operation south of its frontier against Syrian Kurdish forces.

In the two months since the operation began, it has established a so-called "safe zone" in a 120-kilometre-long strip along the border, where it says it wants to resettle Syrian refugees.