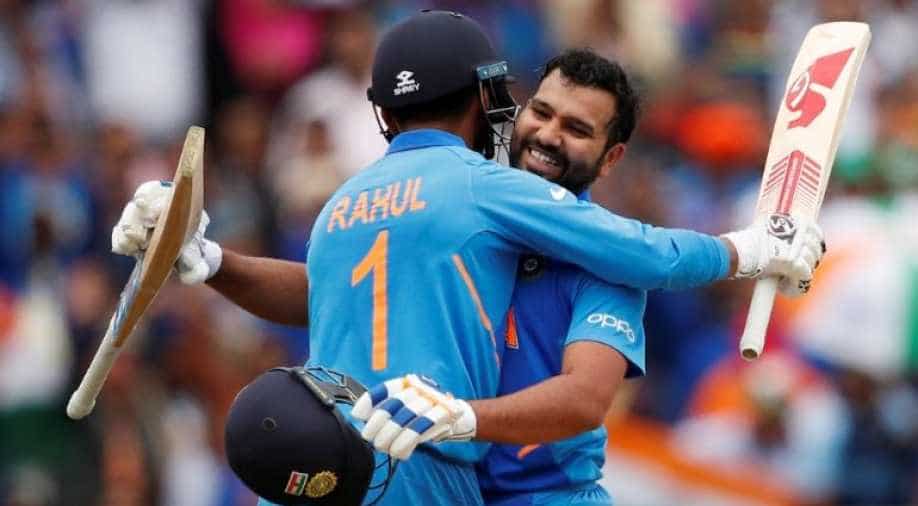 Rohit became only the second batsman, after Sri Lanka's Kumar Sangakkara, to score four hundreds at a single World Cup

India batsman KL Rahul has enjoyed a quietly productive Cricket World Cup so far and while he has failed to capitalise on several good starts he feels no need to try to play like opening partner Rohit Sharma, who is in the form of his life.

Rohit produced another sublime innings to notch his fourth hundred of the tournament as India booked their semi-final place with a 28-run win over Bangladesh at Edgbaston on Tuesday.

The right-hander became only the second batsman, after Sri Lanka's Kumar Sangakkara, to score four tons at a single World Cup, prompting captain Virat Kohli to dub him the world's leading one-day player.

Rahul, who moved up the order in the absence of injured Shikhar Dhawan, admitted his transition has been easier as Rohit continues to find boundaries at will, easing the pressure in the opening powerplay.

"You would be a fool to be tempted to bat like Rohit because he is in a different class," Rahul told reporters. "He is from a different planet altogether when he gets going.''

"To bat with him is really easy because he takes the pressure off you. He keeps getting the boundaries and the scoreboard keeps ticking, I just have to keep there with him. It is great fun," he added.

Rahul, whose 77 against Bangladesh was his highest score of the World Cup, said he was pleased with his steady progress at the top of the order and feels a big score is around the corner.

"Personally, I feel I have been going well, but am not fully satisfied as I haven't carried on after some of the starts," he added.

"When I say 'convert' I mean getting to say 35 or 45 overs as often as I can because in these conditions it is the set batsmen who can do the most damage," said Rahul.