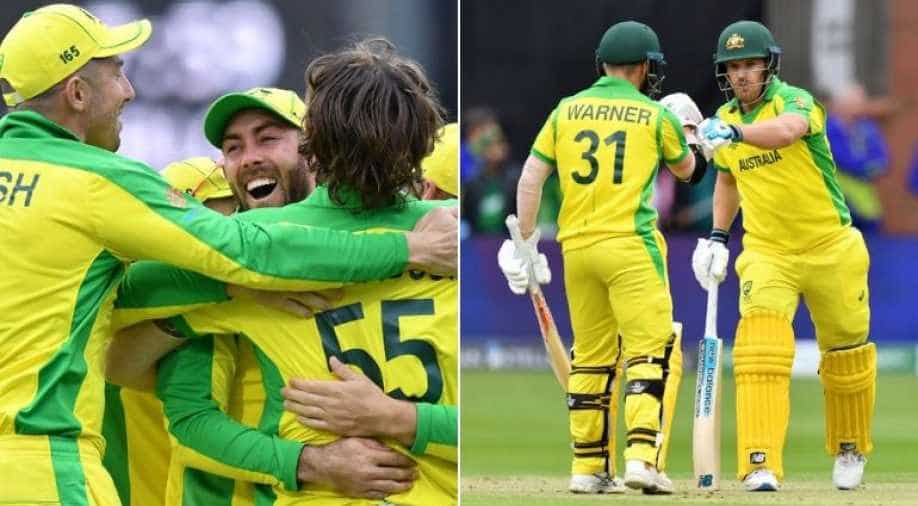 Australia beat Pakistan by 41 runs in Taunton on Wednesday after David Warner hit his first international century following his return from a ball-tampering ban.

Warner made 107 and, with Australia captain Aaron Finch (82), got the defending champions off to a flying start with an opening stand of 146 -- the highest partnership for any wicket at this World Cup to date.

Mohammad Amir dragged Pakistan back into the game with career-best figures of five for 30 in 10 overs but Australia still managed to post a challenging score of 307, which ultimately proved beyond their opponents.

"It means a lot to a batter to get a century," said man-of-the-match Warner. "It was a great effort from Pakistan in the end but our bowlers bowled excellent. They probably got closer than we expected."

Pakistan, after a middle-order collapse that saw them lose three wickets for 11 runs in 15 balls, were all but beaten at 200 for seven in the 34th over.

But captain Sarfaraz Ahmed (40) and the big-hitting Wahab Riaz (45) gave them renewed hope with a stand of 64.

Australia, who lost to India on Sunday, were again looking to Mitchell Starc to get them out of a tight spot, as had done in an earlier win over the West Indies and the fast bowler duly delivered with 2-43.

He had Wahab caught behind got off a thin edge, although it needed an Australia review of an original not out decision to leave Pakistan 264-8

Two balls later, Amir played on for a duck before Glenn Maxwell ended the match with a brilliant direct hit run out of Sarfaraz.

Babar Azam was in superb touch, with 28 of his 30 runs coming in fours, before he mishooked Nathan Coulter-Nile to deep backward square leg.

Opener Imam-ul-Haq was upping the tempo in his 53 when he gloved Pat Cummins (3-33) down the legside to wicket-keeper Alex Carey.

And when Shoaib Malik was brilliantly caught for nought by a diving Carey after inside edging Cummins, Pakistan were in dire straits at 147-5.

Both Warner and Steve Smith, also returning from a year-long ban for ball-tampering, had been jeered by fans in previous games but Pakistan fans largely heeded an appeal from Sarfaraz not to boo the pair, preferring to roar chants of "Amir!, Amir!". 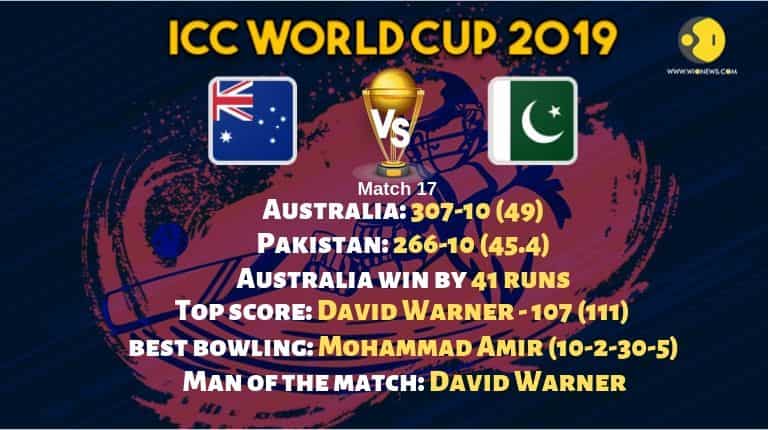 Warner completed his 15th one-day international hundred when an edge off Shaheen Shah Afridi flew past slip for four.

An elated Warner leapt in the air in celebration but his 111-ball innings ended soon afterwards when he was caught at point off Shaheen, having gone past fifty for the third time in four innings at this World Cup.

"I'm very disappointed," said Sarfaraz. "We lost three wickets in 15 balls and that's why we lost.

"We conceded too many runs in the first 20 overs apart from Mohammad Amir. We came back and restricted them well but it was a 270-280 pitch.

"We made some runs and got starts but we've got to convert them and go long. If you want to win matches your top four must score runs."

Australia have three wins in four matches while Pakistan are struggling, with just one victory in their four games so far