As it happened | AUSvPAK: Australia defeat Pakistan by 41 runs 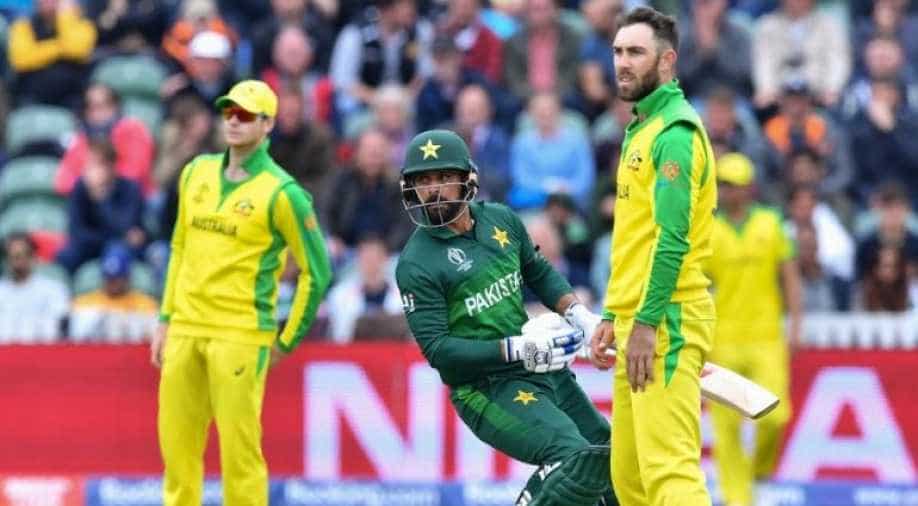 Australia beat Pakistan by 41 runs in Taunton on Wednesday after David Warner hit his first international century following his return from a ball-tampering ban.

After winning the toss, Pakistan's skipper elected to field first but the bowlers failed to take advantage on an overcast morning at southwest county Somerset's headquarters apart from Mohammad Amir.

Amir took a one-day international best five for 30 but other bowlers were simply ineffective.

For Australia, David Warner made his first international century since completing a ball-tampering ban in Australia's total of 307.

Australia looked set for a huge total in Taunton while Warner and captain Aaron Finch (82) were sharing a first-wicket stand of 146, the highest partnership for any wicket at this World Cup to date.

But left-arm quick Amir dragged Pakistan back into the game, returning figures that surpassed his previous best of 4-28 and are the best in the tournament so far.

Both Warner and Steve Smith, also returning from a year-long ban for ball-tampering, had been jeered by fans in previous games but Pakistan fans largely heeded an appeal from captain Sarfaraz Ahmed not to boo the pair, preferring to roar chants of "Amir!, Amir!".

Amir started with a probing maiden, one of two in an initial four-over spell that cost a mere 11 runs.

Finch should have been out for 26 when he edged Wahab Riaz, only for first slip Asif Ali to floor a head-high catch.

He was dropped again on 44 when wicketkeeper Sarfaraz could not hold a tough chance following an edged cut off Mohammad Hafeez's second ball.

Finch cashed in, hitting off-spinner Hafeez for two successive fours as he completed a 63-ball fifty.

The skipper then hoisted Hafeez for two legside sixes in as many balls but he gave his wicket away when he miscued a big shot immediately upon Amir's return, with Hafeez taking a fine catch running back from cover.

Smith (10) holed out off Hafeez before Glenn Maxwell (20), promoted up the order to number four, was clean bowled going for a booming drive off Shaheen to leave Australia 223 for three.

Warner completed his 15th one-day international hundred when an outside edge off Shaheen flew past Asif at slip for his 11th four in 102 balls and he leapt in the air in celebration.

But he was out soon afterwards, caught at deep point by Imam-ul-Haq off Shaheen, having gone past fifty for the third time in four innings at this World Cup.

Batsmen Shaun Marsh, Usman Khawaja and Alex Carey all fell to Amir, who ended the innings with an over to spare when tailender Mitchell Starc holed out.

Mitchell Starc delivers what is needed at this moment.

Mohammad Amir out, he departs on a duck.

Although he was good with the ball but it was not his day with bat.

Next batsman is Shaheen Afridi.

Wahab Riaz out... What a wicket it was, UNPREDICTABLE...

On-field umpire gives no-out, Finch asks for a review. And guess what... a little spike in the ultra edge replay signals that Riaz must depart...

He played brilliantly though, scoring 45 off 39 balls.

Next batsman is Mohammad Amir.

Kane Richardson is back into attack and he gives 6 runs from the over.

How are your nerves?

Mitchell Starc comes back into attack and give just 3 runs.

A  good over for Aussies.

Wahab Riaz is on fire...He is hitting big shots to pull down the asking rate.

Total 11 runs from Coulter-Nile's 9th over.

P3 has started, which means 5 players can be outside the circle.

Maxwell comes back into attack and delivered an expensive over.

He gives 2 runs in this over.

Nathan Coulter-Nile comes back into attack.

Total 11 runs from the over that includes one sixer by Wahab Riaz.

A brilliant over by Pat Cummins, just 3 runs from this spell.

Starc's 7th over and he gives 7 runs from the over.

Pat Cummins comes back into attack and gives just 2 runs.

Mitchell Starc comes back into attack.

5 runs from the over.

A good over from Kane Richardson.

Next batsman is Wahab Riaz.

The game is beautiful plus this view...

Maxwell from the other end.

A total of 9 runs from the over.

Kane Richardson's 6th spell, which is little expensive at this moment.

Glenn Maxwell comes back into attack.

8 runs from the over.

Shoaib Malik departs on a duck... Australia are definetely dominating here in this game.

Next batsman is Asif Ali.

Aaron Finch takes a wicket, yes, was the skipper, who is known for his splendid batting, is bowling the 27th over.

He takes the most important wicket at this moment as he sends Mohammad Hafeez back to the pavilion.

Shoaib Malik is the next batsman.

Pat Cummins gets a massive breakthrough as he takes Imam-ul-Haq's wicket.

Imam-ul-Haq departs after scoring 53 off 75 balls.

Australia needed this wicket at this moment.

Fifty up for Imam-ul-Haq!

It's his sixth half-century of his career and first of this World Cup.

I suspect Finch is already looking around for bowling options. This isn't the scariest Aussie bowling line-up...

Cricket analyst and also a presenter Harsha Bhogle believes it is the scariest Aussie bowling line-up.

Another wicket...Nathan Coulter-Nile to Babar Azam, caught out by Kane Richardson.

Next batsman is Mohammad Hafeez.

Imam-ul-Haq and Babar Azam have soaked a lot of pressure after Zaman's wicket.

Pat Cummins has broken through, he gets Fakhar Zaman wicket.

Zaman departs on a duck.

That's a huge loss for Pakistan in this massive run-chase.

Next batsman is Babar Azam.

Amikr strikes again, and it's a 5-wicket haul for him in this World Cup.

Mitchell Starc out and with this, Australian the entire team is all out.

Alex Carey falls for 20, next batsman is Kane Richardson.

Mohammad Amir gets this wicket.

Hasan Ali gets a wicket in his last spell of the match.

Next in is Mitchell Starc.

Nathan Coulter-Nile out after scoring 2 runs.

Wahab Riaz, finally, gets a wicket in this match.

Shaun Marsh out after scoring 23 runs.

Next bastman is Nathan Coulter-Nile.

Amir gets another wicket as takes Usman Khawaja's wicket.

Afridi to Warner, caught out by Imam-ul-Haq.

It's his 15th ODI hundred, which Warner celebrated by jumping and taking off his helmet.

Next batsman is Shaun Marsh.

Mohammad Hafeez sends Steve Smith back to the pavilion.

Aaron Finch out after scoring 82 runs.

Mohammad Amir gets the breakthrough.

It just gets better and better for Australia.

David Warner gets to his third half-century of #CWC19 – it's come from 51 balls. #CmonAussie#AUSvPAK LIVE 👇 https://t.co/eEmVwQQPYP pic.twitter.com/ubZATRTO3U

20 overs are gone, Pakistan are still trying to get a breakthrough.

Fifty up for Finch!

It's time for drinks break...

Pakistan have failed to use the advantage to bowling first. No wickets yet on a pitch which is offering quite a a lot.

Australia off to stable start, they are 56/0 after 10 overs.

After singing the national anthem, Australian openers Aaron Finch and David Warner have arrived at the crease.

...and the match begins.

The day is expected to be a dry and cloudy in the start, but chances of rain thereafter might result in a shortened game.

While the pitch might offer some assistance for fast bowlers early in the day, captains would be tempted to field first.

In last five years, the ODI head-to-head records between Australia and Pakistan has been dominated by Aussies.

Pakistan win the toss and elect to field first against Australia.

Mohammad Amir will hope to enjoy another landmark occasion at Taunton when Pakistan face Australia there in a World Cup match on Wednesday.

The group fixture at southwest county Somerset's headquarters sees Amir back at the ground where he made his return to first-class cricket in England three years ago.

Amir was the rising star of world cricket when his career came to a stunning halt during a Lord's Test in 2010 after both he and new-ball partner Mohamed Asif were caught bowling no-balls on the orders of then Pakistan captain Salman Butt as part of a newspaper sting operation.

The trio all received five-year bans from cricket and jail terms.

That same 2010 season had seen Amir produce a superb display of swing bowling in taking three for 20 as Pakistan dismissed Australia for just 88 on the first day of a 'neutral' Test at Headingley.

Those skills remained intact as Amir marked his 2016 return to the first-class game in England in 2016 with a haul of three for 36 against Somerset at Taunton.

All three wickets -- including that of former England opener Marcus Trescothick -- owed much to late swing.

The intervening years have not been easy for Amir, however, and he almost missed what is his first World Cup after taking just five wickets in 14 matches before a recent one-day international series in England.

Amir did not bowl in the washed-out first match against England and missed the last four games with chicken pox. England won the series 4-0.

But having been left out of Pakistan's preliminary squad for the World Cup, the 27-year-old made it into the final 15.

His World Cup debut was a rare Pakistan highlight after they slumped to 105 all out against the West Indies, with Amir taking three for 26 in a seven-wicket loss at Trent Bridge.

He was in the wickets again at the Nottingham ground, but this time in a winning cause, with two for 67 as Pakistan surprisingly beat tournament favourites England by 14 runs last week.

But Pakistan's progress was checked by a total washout against Sri Lanka at Bristol.

Hello! And welcome to the Match 17 of the Cricket World Cup 2019 which is between Australia and Pakistan in Taunton.