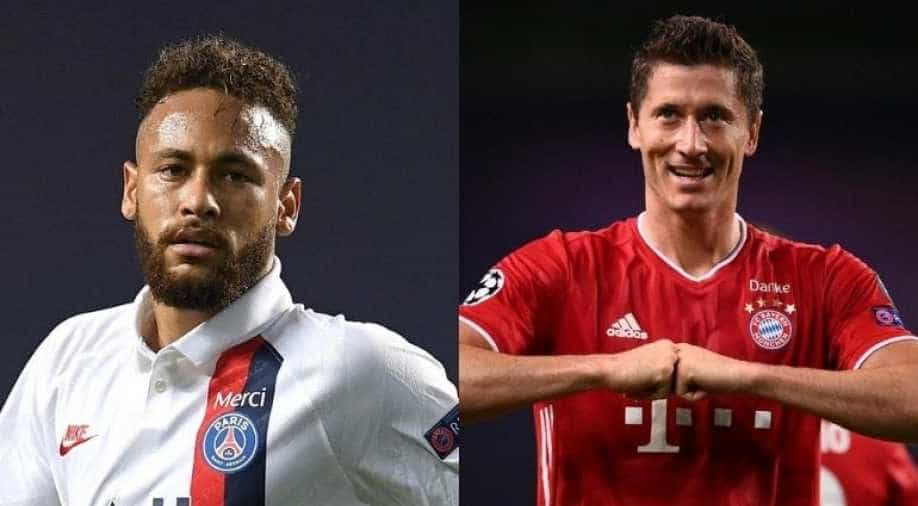 Such an occasion deserves to be played in front of a full stadium, but the cavernous, 65,000-seat Estadio da Luz will remain empty.

The Paris Saint-Germain of Neymar and Kylian Mbappe go after a first-ever Champions League crown in a final behind closed doors in Lisbon on Sunday, but standing in their way are a fearsome Bayern Munich led by the prolific Robert Lewandowski.

It is a mouthwatering showdown between two of Europe's super clubs, with PSG eager to cap their rise in the last decade under Qatari ownership and Bayern hoping to lift the trophy for the sixth time.

Such an occasion deserves to be played in front of a full stadium, but the cavernous, 65,000-seat Estadio da Luz will remain empty.

No fans are allowed in, as has been the case throughout this unprecedented 'Final Eight' tournament in the midst of the coronavirus pandemic.

"It will be odd to play behind closed doors. We would have liked to have our supporters there but I know they are supporting us where they are. But this is still the Champions League," said Mbappe on Saturday.

"You still feel all the tension. Everyone wants to win it, especially with this unusual format. Everyone will remember this for a long time because of the tragic events surrounding it."

While the atmosphere in the ground will be surreal, the match promises to be fascinating, pitting together two teams whose domestic dominance is almost total and who were both comfortable winners in the semi-finals.

'Go down in history'

PSG beat RB Leipzig 3-0 to become the first French representative in the final since Monaco in 2004 and can now become just the second French winner ever, after Marseille in 1993.

"At the gates of paradise" roared a headline in France's leading sports daily, L'Equipe, on Sunday.

"This is exactly why I came here. I always said that I wanted to go down in my country's history. (This) is another chance to do that," said Mbappe.

If PSG represent, in the eyes of many, the nouveau riche, Bayern are one of the continent's traditional giants. This is their 11th final.

The last of their five victories came in 2013. Four starters from that victory over Borussia Dortmund at Wembley -- goalkeeper Manuel Neuer, Jerome Boateng, David Alaba and Thomas Mueller -- could play here. Boateng is expected to start after a hamstring injury.

Leaving aside their storied past, Bayern appear the most formidable team in Europe just now.

Their 3-0 semi-final win over Lyon was their 20th consecutive victory. They are unbeaten in 29 matches since December last year under coach Hansi Flick.

They have already pocketed a German league and cup double, with the Bundesliga title their eighth in a row.

They have won all 10 Champions League matches this season, scoring 42 goals, including a 7-2 win at Tottenham Hotspur and the 8-2 quarter-final demolition of Barcelona.

Lewandowski has 55 goals this season. But he is more than ably supported.

Bayern take the risk of playing with a high defensive line. Yet it remains to be seen if they can afford to do that against PSG's attack of Neymar, Mbappe and Angel Di Maria.

"We've always played with a high line and ultimately we've got results doing that so we won't change too much," Flick insisted.

"Bayern's faith in their own strengths is unwavering," said Munich-based daily Sueddeutsche Zeitung on Sunday.

The French champions have themselves lost once since November 1, last year, and they overturned that 2-1 reverse in Dortmund in the last 16 by winning the return leg.

"It is a small advantage for Bayern that they are used as a club to playing these games. I accept that, but it is not a decisive advantage," said their German coach Thomas Tuchel.

He was optimistic playmaker Marco Verratti would start after a calf problem. Goalkeeper Keylor Navas is tipped to return after a hamstring injury.

To the winners, along with the glory, will go huge sums in prize money.

At the start of the season UEFA set out a prize pot which ensured up to 80 million euros ($94m) would be destined for the winners.

To that sum can be added close to the same again from television and as a result of the clubs' respective UEFA ranking.