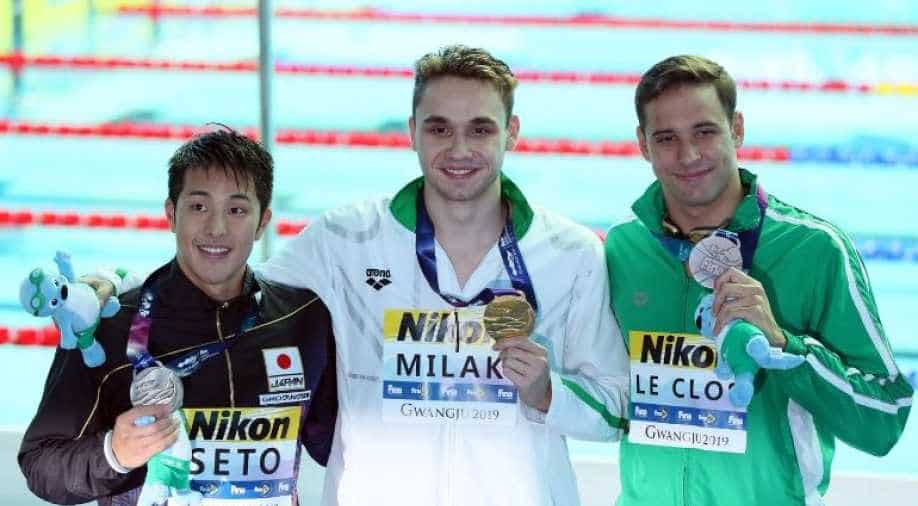 'As frustrated as I am to see that record go down, I couldn't be happier to see how he did it,'Phelps.

Phelps described Milak's time of one minute, 50.73 seconds in Gwangju as "incredible", although he admitted his astonishment was tinged with sadness at losing a world record which had stood since 2009.

"As frustrated as I am to see that record go down, I couldn't be happier to see how he did it," Phelps told the New York Times.

"That kid's last 100 was incredible. He put together a great 200 fly from start to finish."

The 19-year-old Milak sliced a whopping 0.78 seconds off Phelps's previous world best, which was achieved during the bodysuit era, after flirting with the record for much of the past season.

"It happened because there was a kid who wanted to do it, who dreamed of doing it, who figured out what it would take to do it," said Phelps, who had a special fondness for the 200m fly.

"(He) worked on his technique until it was beautiful and put in the really, really hard work that it takes to do it - my hat's off to him."

Milak became the first swimmer to go under 1:51 minutes, while his winning margin was, remarkably, more than three seconds as Japan's Daiya Seto finished a distant second and the South African Chad le Clos third.

Le Clos, who famously beat Phelps in the 2012 London Olympic final, shrugged: "Kristof is in another league - he's a hell of a lot faster than all of us."

Milak said he was "honoured" to break a world record held by Phelps, who he had worshipped growing up and watched videos of to polish his technique.

"I wasn't expecting to break the record," he admitted. "But if you put in the hard work, good things happen and I was ready. I just tried to block everything out and find a good rhythm."