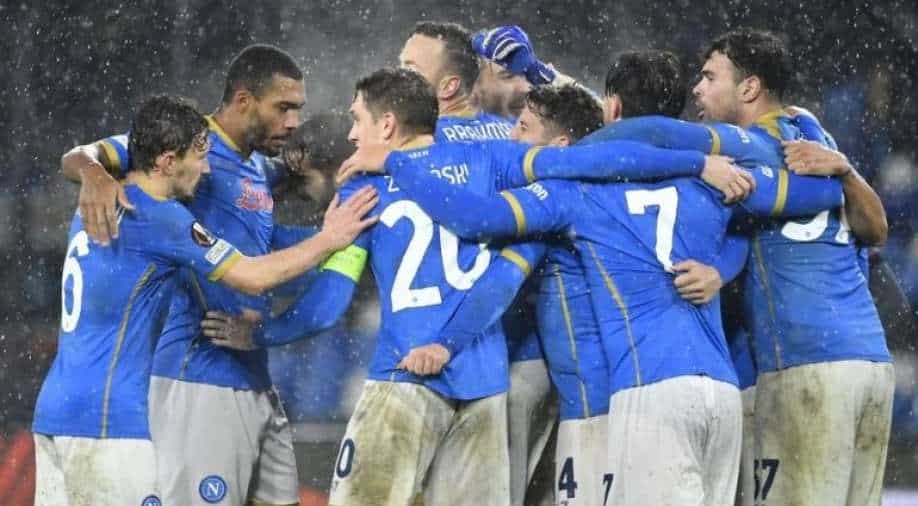 Napoli ended in second place, two points ahead of Leicester, and will feature in the Europa League knockout round play-offs in February.

Brendan Rodgers admitted he doesn't know what the Europa Conference League is after Leicester's 3-2 defeat at Napoli condemned them to a place in the unheralded competition on Thursday.

Napoli sent Leicester crashing out of the Europa League as the Italian side advanced to the knockout stages in a dramatic conclusion to Group C.

Leicester were top of the group going into the final round of matches, but the defeat in Naples dropped them to third place, meaning they will enter UEFA's third-tier tournament in the knockout play-off round in February.

"I've got to be honest I don't even know what the competition is," Rodgers said of the Europa Conference League.

"I was focused on the Europa League and winning this group or at the very least finishing second. I'm not sure what it is, but I'm sure we will find out soon enough."

Napoli had blown a two-goal lead as Leicester hit back to level by half-time, but Eljif Elmas's second goal of the game won it for the hosts after the interval.

Spartak Moscow finished top of the group after a 1-0 win at Legia Warsaw, secured by Zelimkhan Bakaev's 17th-minute goal.

Leicester, beset by Covid-19 cases and other illnesses, would have salvaged their Europa League place if Legia's Tomas Pekhart hadn't missed a stoppage-time penalty.

Napoli ended in second place, two points ahead of Leicester, and will feature in the Europa League knockout round play-offs in February.

Injury-hit Napoli took the lead in the fourth minute as Adam Ounas marked his first start for the club since 2019 with a clinical low strike from just inside the penalty area.

Napoli struck again in the 24th minute when Andrea Petagna beat Leicester's offside trap and squared his pass to Elmas, who slotted past Kasper Schmeichel with ease.

Evans' first goal in Europe for eight years was followed in the 33rd minute by Kiernan Dewsbury-Hall's maiden goal for Leicester.

Maddison's free-kick was only cleared to the edge of the area, where the 23-year-old midfielder smashed a superb volley into the bottom corner.

But Napoli won it in the 53rd minute as Elmas lashed home from Giovanni Di Lorenzo's cross to continue a disappointing season for the FA Cup holders.

Rodgers could face his former club Celtic in the Europa Conference League as they finished third despite a 3-2 win over second-placed Real Betis in Group G.

However, Celtic's Japan forward Kyogo Furuhashi suffered a hamstring injury and boss Ange Postecoglou said: "It's not good. We will just wait and see what the assessment is."

Marseille, already destined for the Europa Conference League, beat Lokomotiv Moscow 1-0 in Group E, which was won by a Galatasaray team who settled for a 0-0 draw with second-placed Lazio.

Real Sociedad secured second place in Group B with a 3-0 win against PSV Eindhoven, who drop into the Europa Conference League.

Mikel Oyarzabal netted a 43rd-minute penalty and scored again in the 62nd minute before Alexander Sorloth struck in the final moments after Ibrahim Sangare's red card for PSV.

Group A winners Lyon lost their 100 percent record in this season's competition after a 1-1 draw against second-placed Rangers.

In the Europa Conference League, Tottenham's postponed match against Rennes -- called off due to a severe coronavirus outbreak at the north London club -- looms large over Group G.

Second-placed Vitesse Arnhem beat Mura 3-1 to move three points clear of Tottenham, who now know they must beat group winners Rennes when the game is eventually rearranged if they are to qualify for the knockout stages.

Tammy Abraham scored twice for Jose Mourinho's troubled Roma in a 3-2 win at CSKA Sofia that gave them top spot in Group C after second-placed Bodo/Glimt were held to a 1-1 draw by Zorya Luhansk.