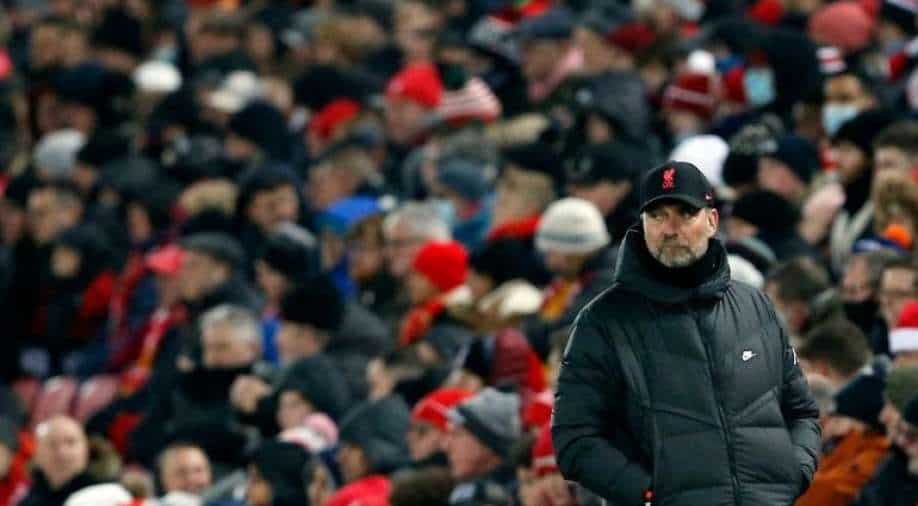 Klopp refused to name the players on Friday as they were awaiting test results but forward Roberto Firmino and goalkeeper Alisson Becker were absent from pictures released by Liverpool of a club training session.

Liverpool manager Jurgen Klopp believes his side's crucial match against Chelsea will go ahead on Sunday despite three new coronavirus cases in their camp as another fixture was called off by the Premier League.

Klopp refused to name the players on Friday as they were awaiting test results but forward Roberto Firmino and goalkeeper Alisson Becker were absent from pictures released by Liverpool of a club training session.

Both sides will regard the match at Stamford Bridge as a must-win game as they seek to keep pace with defending champions Manchester City, who are eight points clear at the top.

"We have three new Covid cases in the team and a few more in the staff so it's not so cool at the moment," Klopp told his pre-match press conference.

"I'm not able to say who it is because we have to do the whole process, get a proper PCR (test), but you will see the day after tomorrow on the team sheet -- it will be pretty clear who is affected or infected."

The German, whose side are third in the table, a point behind Chelsea, added: "We never had this proper outbreak where 15 to 20 players had it. For us it is every day, another one, stuff happens more and more often.

"It's like a lottery in the morning, waiting for the result. It is pretty much day-by-day, always one case, then another one.

"We have to wait as the boys are not in yet. In this moment (we will) probably not (ask for a postponement) but we don't know how it will look in a few hours."

In addition to the three Covid cases, the injured Takumi Minamino and Thiago Alcantara will miss the trip to Chelsea.

Klopp's comments came as Southampton's Premier League match at home to Newcastle on Sunday was postponed due to Covid cases in the visitors' camp.

The game at St Mary's is the second in Premier League matchweek 21 to be postponed, following the announcement on Thursday that the New Year's Day clash between Leicester and Norwich was off.

Top-flight clubs have stepped up their Covid-19 protocols, including daily testing for players and club staff.

Despite that, a record 103 cases were confirmed for the period from December 20 to 26.