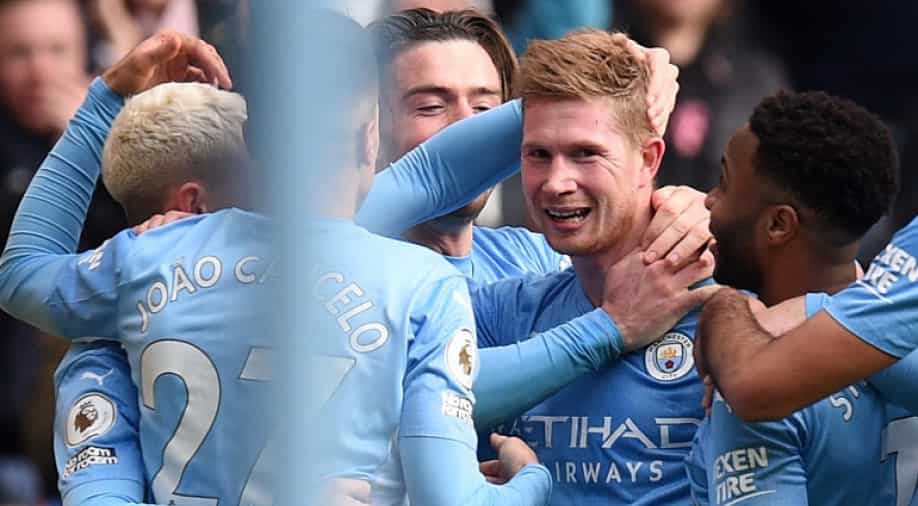 Kevin De Bruyne`s 70th-minute strike means that City have 56 points from 22 matches with Chelsea on 43 points. Third-placed Liverpool, who have two games in hand, including Sunday`s match at home to Brentford, are on 42 points.

Manchester City took a major step towards retaining their Premier League title with a 1-0 win over second-placed Chelsea on Saturday, opening up a 13-point lead at the top of the table for Pep Guardiola`s side.

Kevin De Bruyne`s 70th-minute strike means that City have 56 points from 22 matches with Chelsea on 43 points. Third-placed Liverpool, who have two games in hand, including Sunday`s match at home to Brentford, are on 42 points.

City extended their winning run in the league to 12 games, and deservedly so after another display of their controlled possession football.

But it was a disappointing effort from a Chelsea side which rarely threatened, displayed scant ambition and little reaction after De Bruyne`s goal.

There were surprises in both team line-ups, with Guardiola leaving central defender Ruben Dias on the bench and Thomas Tuchel making the same choice over midfielder Mason Mount.

Read Also | 'Few have achieved what you did': Tributes pour in on Twitter as Virat Kohli gives up India's Test captaincy

Chances were hard to come by in the opening 45 minutes with the best occasion falling to Jack Grealish, after De Bruyne robbed Mateo Kovacic on the edge of the box. But Chelsea keeper Kepa Arrizabalaga did well to keep out the midfielder`s effort.
Chelsea`s best effort had come early in the second half when Kovacic fed Romelu Lukaku, but City keeper Ederson rushed out quickly to make a fine save.

It was a fine solo goal from De Bruyne which settled the outcome, the Belgian riding a challenge from N`golo Kante before beating Kepa Arrizabalaga with a curling shot into the far corner.

Phil Foden could have added a second for City six minutes from the end, but his shot from a promising position was high and wide.
"It’s always difficult against them. They are tight defensively, know what they are doing, and you have to be patient," said De Bruyne.
"We played the game we needed to play and did what we had to do," he added.

Chelsea beat City in last season`s Champions League final, but City have completed the double over the London side in the Premier League this season, having won 1-0 at Stamford Bridge in September.